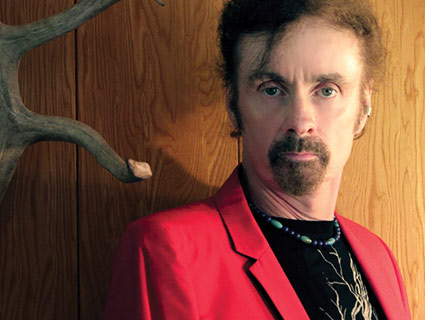 In T.C. Boyle‘s new novel When the Killing’s Done, a biologist and an animal-rights activist clash over the fate of invasive rats and pigs on Southern California’s Channel Islands. Boyle, the author of 22 novels and collections of short stories, deftly lampoons his self-righteous characters—you get the sense that when it comes to the environment, humanity is just a bunch of bumbling idiots. In our interview, though, Boyle told me he hasn’t totally given up hope. “It’s raining like crazy here right now, but if it weren’t, I could see Santa Cruz Island from where I am right now. And it’s pretty amazing that it has been preserved and it is wild and creatures do live there, other than us.”

Mother Jones: You write a lot about the liberal-guilt take on the environment. Your characters are the kinds of people who sanctimoniously limit their showers to five minutes. Do you think some kinds of environmentalists are more defensible than others? Or are you just sort of out to satire all of them equally? What’s your take?

T.C. Boyle: I’m extremely worried. I’m worried about the survival of our species, worried about what we’re doing, worried about being Americans, worried about depletion of resources. On the other hand, we are trying. We are trying to understand our impact on the environment. The thing is, it’s such a large question that I wonder if any individual effort can really do much. That said, I’m a fanatical recycler. No scrap of food has left this house without going into the mulch pile. My yard is a natural place for animals. I dug a pond for one of them. I don’t know if I’m doing this out of guilt, I think I’m doing it because I want to. And I think that might be a difference.

I think if I’m doing my job correctly, I’m presenting a scenario for you as the reader to engage with on your own. I mean that’s what the best art is supposed to do. It’s not supposed to be political. I think if you read all my books you know where I stand, pretty much. You could probably give the reader a questionnaire and they could figure out what I’m about. But I don’t think my job is to tell you that.

MJ: Would you say you’re a satirist?

TCB: What I’m doing is exploring things. This is why I’m a fiction writer rather than an essayist or a politician or whatever. I just gather material and find a scenario, and see where it takes me. I don’t have a plan. Of course, at some point, I realize what it is, and I realize how all the works are connected, and so on, but that’s only in retrospect. I love satire. Evelyn Waugh is one of my favorite writers of all time. He’s hilarious. He’s so wicked. He’s so great. On the other hand, pure satire is an imitation. It doesn’t really have any heart. It only holds things up to ridicule. So I hope that in my fiction, that maybe I’m getting beyond that and doing something else altogether.

MJ: In When the Killing’s Done, at first you’re really siding with the biologist, who wants to get rid of the invasive species and have the islands go back to how they were “meant to be.” But then you’re not so sure whether that idea of restoring nature is the right thing to do or not.

TCB: The environmental term is the “baseline.” When do you bring it back to? What is restoration? What does it matter? A more simple level with what happened on Santa Cruz, however, the restoration was simply to remove animals that are numerous elsewhere in the world, like rats, and pigs, and sheep, and so on, in order for the unique life forms there, that exist nowhere else, to continue to be able to survive. I often parallel this with the California condor. Here’s this gigantic vulture, which is in decline because of us. It used to feed on buffalo carcasses, animal carcasses out in the woods. Well there isn’t anything like that anymore. And we took them all out of nature, and we keep putting them back, and we’re encountering various problems with that. And it’s cost a lot of money, whereas, members of our own species—one-third of the people alive today don’t have enough to eat or are starving to death, and die. But personally, and selfishly, standing here, with food in my mouth, I’m happy that there are condors out there. And I’m happy that there are native dwarf foxes on the island. And I’m sad that there no more mysterious places in the world.

If you look over all of my life’s work, basically this has been my concern from the beginning. My first book is called Descent of Man and it’s short stories. A lot of them have to do with nature. Nature and our place in it. And even if you look at books like my book about Alfred C. Kinsey in The Inner Circle, he tried to separate our spiritual selves or intellectual selves from our animal selves. He did these sex researches and said that there’s no such thing as love or, if there is, it doesn’t really matter in the scientific analysis. We are animals and we are made in this way and this is how we behave. I’m just kind of fascinated by how we can deny that we are animals and what our impact on the other animals is like, and how quixotic we can be in trying to assess what we’ve done in trying to correct it.

MJ: What made you decide to write about the Channel Islands specifically?

TCB: That’s an easy question. For 18 years I’ve been driving up the coast from LA into Santa Barbara, looking at those islands, wondering, “What goes on out there?” And then, during the height of the controversy over the pig hunt, our local newspaper carried a number of stories, and, right now, I’m in the kitchen because I’m cooking, and I’m looking at a headline from the paper that has been on this refrigerator for probably six or seven years, and the headline is, “Eagles Arrive as Pigs are Killed”. And that just got me wondering, “What is this all about?” And so I was lucky enough to meet the biologists and go and hangout with them, and go and catch little foxes and watch them release the eagles, and so on and so on.

MJ: What are you reading right now?

TCB: The Emperor of Maladies. It’s a book about cancer. Quite fascinating. I’ve been rereading some stuff. I’ve just read [Saul] Bellow’s Henderson the Rain King, again. It’s one of my favorites of his. I just reread James Herriot’s All Creatures Great and Small, which is so fascinating and beautiful. I haven’t read it in like twenty years. It’s nice without being sappy. And who would think a rural veterinarian’s adventures would be good? I’m not reading novels right now, because I’m writing a novel and it’s very hard for me to read a novel when I’m writing a novel, because the voice of the other novelist can creep in, and the hardest thing about doing a long project is to keep the tone and voice consistent. So I tend to read more non-fiction when I’m writing a novel and more fiction when I’m writing short stories where it doesn’t really matter, because the story’s done in two weeks, and you’re on to something else, and if somebody’s voice creeps in a little bit, that doesn’t really matter.

MJ: Can you tell me anything about your next novel?

TCB: It’s called San Miguel. And it’s historical. It’s something I’ve never done before. I’m just trying to do a straightforward historical novel without irony and without satire and without comedy. That just seems the way that the story wants to be told. I just want to see if I can do it. I’m always trying to do something different and trying to keep myself amused. So there you have it.