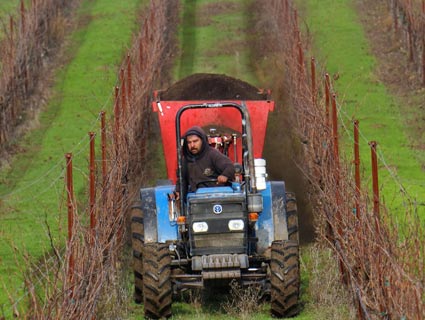 A tractor spreads compost from Recology on a vineyard.Photo by Larry Strong, courtesy of Norcal Waste Systems, Inc.

Last month, at a vast composting yard owned by a Northern California waste and recycling company, Recology, I watched a load of lawn and food scraps from San Francisco residents get fed into a sorting machine. A spinning cylinder resembling a supersized cheese grater sifted out tidbits like lime wedges and grass clippings and spit the chunkier items onto a platform, where a worker in a neon vest plucked out plastic bags and an aerosol can of glass cleaner—just a few of the hundreds of pieces of contraband that he’d cull that day. I asked if he ever let anything slip by. “Sometimes,” he said with a sheepish smile. I later ran my hand through a ripened compost pile and felt little pieces of glass and plastic mixed in with the fertile humus.

As thousands of cities have begun composting yard waste and hundreds more begin collecting food scraps on a large scale, new questions are emerging about what kinds of things make their way into compost and whether any of them pose a threat to humans and the environment. Federal laws do not require compost to be screened for contaminants, of which plastic and glass are only the most visible. Random tests of compost used in organic agriculture have occasionally turned up elevated levels of lead and traces of pesticides. Last month, the US Composting Council, the industry’s trade group, warned its members to watch out for grass clippings laced with Imprelis, a new weed killer from DuPont that does not easily break down in compost piles.

Compost produced from residential grass clippings and food scraps is particularly popular with organic farmers because it contains a wide range of nutrients and beneficial microbes. As an added service, Recology and other composters will add custom blends of minerals to their compost to meet the needs of individual farmers. Recology’s compost is spread on organic vineyards, orchards, and produce farms, where it’s often used to grow cover crops such as mustard that further enrich the soil.

Clean or not, compost is typically viewed as unassailably green. It helps organic farmers control pests and deliver nutrients without using pesticides and chemical fertilizers. Sally Brown, a soil-contamination expert at the University of Washington, estimates that generating a dry ton of compost and applying it to a farm captures the equivalent of 2.6 tons of carbon, enough to counteract driving 5,500 miles. Charles Benbrook, the chief scientist at The Organic Center, an organics industry think tank, says that compost shouldn’t be off limits to organic farmers “just because there is a very low level of some pesticide.”

Pesticide-laced compost has presented a quandary for the USDA’s National Organic Program ever since California regulators traced residues of dichlorophenyl-dichloroethylene, a breakdown product of DDT, and bifenthrin, an ant killer, to compost in pots of organic wheatgrass in Northern California  grocery stores (the levels were not high enough to make anyone sick). DDT was banned for most uses in the early ’70s and bifenthrin is classified as a possible human carcinogen and is highly toxic to fish. The NOP initially proposed setting a strict upper limit for bifenthrin levels in compost but abandoned the idea when wider tests revealed that many brands of commercial compost wouldn’t pass. Regulators ultimately decided to allow any level of contamination in compost so long as “residual pesticide levels do not contribute to the contamination of crops, soil, or water.” 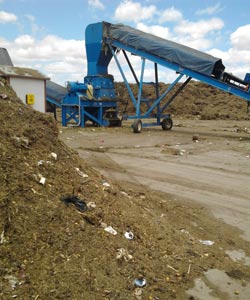 A Recology compost pile containing plastic and other debris

“It was just one in a long string of things that have been problems and will be problems,” says Zea Sonnabend, a policy specialist for California Certified Organic Farmers who helped organize a conference session on the issue last year. While she feels that the highest bifenthrin levels were still too low to justify pulling compost brands off the market, she believes that “it’s only a matter of time before the next big thing comes up.”

Critics of composting are mainly concerned about a lack of oversight. With the USDA and EPA unwilling to require testing of compost, the job falls to a patchwork of state laws and voluntary measures. The nonprofit Organic Materials Review Institute, which reviews organic inputs, requires approved composts to be tested for heavy metals and pathogens every five years. The US Composting Council operates a voluntary accreditation program in which the largest participants must submit to similar metals and pathogen tests once a month. Neither program requires testing for pesticide residues. Of course, almost no amount of testing can guarantee compost’s exact makeup. One part of a pile might come from a pristine field, another from a lawn littered with DDT and lead paint chips.

Compost makers say the fears are overblown. For one thing, the intense heat and microbial action in compost piles break down most contaminants, including motor oils and many pesticides. Researchers with California’s Department of Resources, Recycling, and Recovery, which periodically tests commercial compost for pathogens and heavy metals, say that only 1 or 2 percent of the tests fail to meet the state’s standards. And those toxic contaminants that make it into finished compost are often diluted to undetectable levels once mixed with soil.

Still, obvious regulatory gaps remain. Composting Council executive director Stuart Buckner believes that the EPA still hasn’t learned its lesson from the early aughts, when the herbicide Clopyralid was banned for lawn use after turning up in damaging levels in compost. He’s urging the agency to conduct more research on toxins that build up in compost and require chemical companies to show that new products, such as DuPont’s Imprelis, are safe for composting. He wants any costs for pesticide testing in compost to be borne by the pesticide makers.

Though there’s no easy way to find out what kind of compost was used on your fruits and veggies, it might be worth looking at where the produce was grown. Large compost producers in California must test for heavy metals and pathogens every month or so, while composters in Texas and some other states need not test at all. (There’s no publicly available database of state-by-state regulations). If you’re buying compost for your own garden, look for a brand that’s certified by the Organic Materials Review Institute and the US Composting Council.

More than anything, compost’s growing pains reflect the ubiquity and persistence of modern toxins. “No one escapes all exposure to chemicals in this world anymore,” says Bob Shaffer, a soil consultant for Recology who toured the compost yard with me. “It does not forgive it, but we need to use the organic matter that we have.”