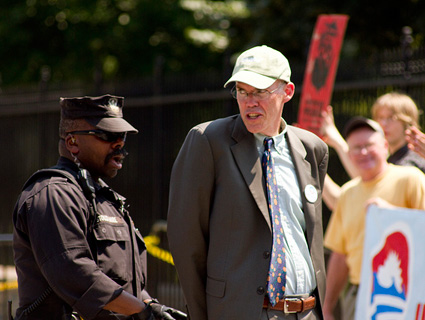 Bill McKibben being arrested in front of the White House on August 20, 2011.<a href="http://www.flickr.com/photos/tarsandsaction/6063237438/">tarsandsaction</a>/Flickr

Read our backgrounder on the Keystone XL pipeline or play with our interactive map of the pipeline.

I didn’t think it was possible, but my admiration for Martin Luther King Jr. grew even stronger these past days.

As I headed to jail as part of the first wave of what is turning into the biggest civil disobedience action in the environmental movement for many years, I had the vague idea that I would write something. Not an epic like King’s “Letter from a Birmingham Jail,” but at least, you know, a blog post. Or a tweet.

But frankly, I wasn’t up to it. The police, surprised by how many people turned out on the first day of two weeks of protests at the White House, decided to teach us a lesson. As they told our legal team, they wanted to deter anyone else from coming—and so with our first crew they were…kind of harsh.

We spent three days in DC’s Central Cell Block, which is exactly as much fun as it sounds like it might be. You lie on a metal rack with no mattress or bedding and sweat in the high heat; the din is incessant; there’s one baloney sandwich with a cup of water every 12 hours.

I didn’t have a pencil—they wouldn’t even let me keep my wedding ring—but more important, I didn’t have the peace of mind to write something. It’s only now, out 12 hours and with a good night’s sleep under my belt, that I’m able to think straight. And so, as I said, I’ll go to this weekend’s big celebrations for the opening of the Martin Luther King Jr. National Memorial on the National Mall with even more respect for his calm power.

Preacher, speaker, writer under fire, but also tactician. He really understood the power of nonviolence, a power we’ve experienced in the last few days. When the police cracked down on us, the publicity it produced cemented two of the main purposes of our protest:

First, it made Keystone XL—the new, 1,700-mile-long pipeline we’re trying to block that will vastly increase the flow of “dirty” tar sands oil from Alberta, Canada, to the Gulf of Mexico—into a national issue. A few months ago, it was mainly people along the route of the prospective pipeline who were organizing against it. (And with good reason: Tar sands mining has already wrecked huge swaths of native land in Alberta and endangers farms, wild areas, and aquifers all along its prospective route.)

Now, however, people are coming to understand—as we hoped our demonstrations would highlight—that it poses a danger to the whole planet as well. After all, it’s the earth’s second-largest pool of carbon, and hence the second-largest potential source of global warming gases after the oil fields of Saudi Arabia. We’ve already plumbed those Saudi deserts. Now the question is: Will we do the same to the boreal forests of Canada? As NASA climatologist James Hansen has made all too clear, if we do so it’s “essentially game over for the climate.” That message is getting through. Witness the incredibly strong New York Times editorial opposing the building of the pipeline that I was handed on our release from jail.

Second, being arrested in front of the White House helped make it clearer that President Obama should be the focus of anti-pipeline activism. For once Congress isn’t in the picture. The situation couldn’t be simpler: The president, and the president alone, has the power either to sign the permit that would take the pipeline through the Midwest and down to Texas (with the usual set of disastrous oil spills to come) or block it.

Barack Obama has the power to stop it, and no one in Congress or elsewhere can prevent him from doing so. That means—and again, it couldn’t be simpler—that the Keystone XL decision is the biggest environmental test for him between now and the next election. If he decides to stand up to the power of big oil, it will send a jolt through his political base, reminding the presently discouraged exactly why they were so enthused in 2008.

That’s why many of us were wearing our old campaign buttons when we went into the paddy wagon. We’d like to remember—and like the White House to remember, too—just why we knocked on all those doors.

But as Dr. King might have predicted, the message went deeper. As people gather in Washington for this weekend’s dedication of his monument, most will be talking about him as a great orator, a great moral leader. And of course he was that, but it’s easily forgotten what a great strategist he was as well, because he understood just how powerful a weapon nonviolence can be.

The police, who trust the logic of force, never quite seem to get this. When they arrested our group of 70 or so on the first day of our demonstrations, they decided to teach us a lesson by keeping us locked up extra long—strong treatment for a group of people peacefully standing on a sidewalk.

No surprise, it didn’t work. The next day an even bigger crowd showed up—and now, there are throngs of people who have signed up to be arrested every day until the protests end on September 3. Not only that, a judge threw out the charges against our first group, and so the police have backed off. For the moment, anyway, they’re not actually sending more protesters to jail, just booking and fining them.

And so the busload of ranchers coming from Nebraska, and the bio-fueled RV with the giant logo heading in from east Texas, and the flight of grandmothers arriving from Montana, and the tribal chiefs, and union leaders, and everyone else will keep pouring into DC. We’ll all, I imagine, stop and pay tribute to Dr. King before or after we get arrested; it’s his lead, after all, that we’re following.

Our part in the weekend’s celebration is to act as a kind of living tribute. While people are up on the mall at the monument, we’ll be in the front of the White House, wearing handcuffs, making clear that civil disobedience is not just history in America.

We may not be facing the same dangers Dr. King did, but we’re getting some small sense of the kind of courage he and the rest of the civil rights movement had to display in their day—the courage to put your body where your beliefs are. It feels good.

Bill McKibben is Schumann Distinguished Scholar at Middlebury College, founder of 350.org, and a TomDispatch regular. His most recent book, just out in paperback, is Eaarth: Making a Life on a Tough New Planet. To stay on top of important articles like these, sign up to receive the latest updates from TomDispatch.com here.