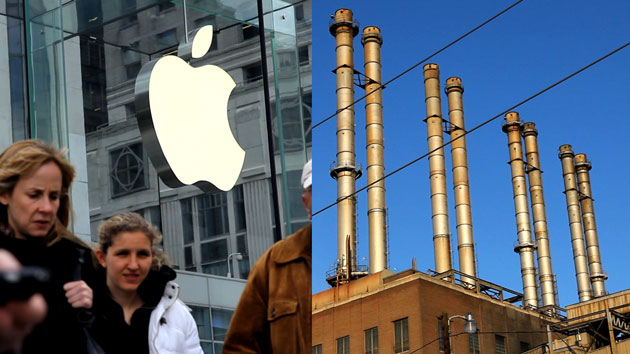 You’ve heard about the Foxconn factory in China where your iPad is assembled. But have you ever considered the energy required to store your emails, photos, and videos in the cloud? As worldwide demand for data storage skyrockets, so do the power needs of the servers where all our digital archives live. While some companies (like Facebook) have made great progress in ditching dirty fossil-fuel energy for cleaner renewables, a few internet giants lag far behind. Climate Desk visited Maiden, North Carolina, for a close-up view of what will soon be one of the world’s biggest data centers—owned by Apple and powered by the coal-heavy power behemoth Duke Energy.

UPDATE: A spokeswoman for Apple pushed back in a statement to Climate Desk after publication that the Maiden facility will be the “greenest data center ever built,” and released figures that dispute Greenpeace’s report. Greenpeace’s report estimates the facility will draw 100 megawatts of power. Apple says the facility will use 20 megawatts at full capacity, and is on track to supply more than 60 percent of that power on-site from renewable sources including a solar farm and fuel cell installation, “which will each be the largest of their kind in the country.” Suzanne Goldenberg from Climate Desk partner site The Guardian, quotes Greenpeace’s Gary Cook as remaining skeptical about Apple’s internal numbers: “I do feel that’s a bit of a lowball number. That would be a very empty building they are putting there in terms of power demand if it’s only 20MW. That seems disproportionally small,” he said.

Apple’s new data center is only one of many coal-fueled server farms across the country. The map below shows 52 of the largest, owned by companies like Google, Amazon, Apple, and Twitter. Mouse over a point on the map to see who owns the plant, and how reliant on coal it is, according to Greenpeace estimates. (Some data centers are clustered close together; zoom in on a particular area to see each one in more detail.)

The figures in the map are for individual data centers. To give you a better sense of the big picture, here’s an overview of how much of each company’s overall energy comes from coal, according to Greenpeace estimates: