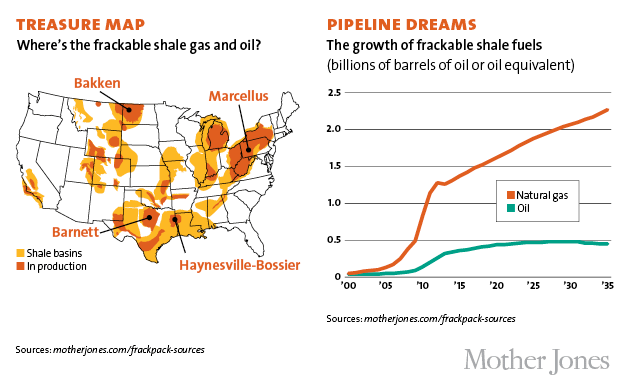 This spring, five out of seven political ads in swing states like Ohio and Florida were about energy, according to Kantar Media’s Campaign Media Analysis Group. That’s because, as reported by the New York Times, the fossil fuel industry and its allies had dropped more than $153 million on political ads as of September. That included $37 million spent by the American Petroleum Institute, the nation’s most powerful oil and gas lobby. Its “I’m an energy voter” ads say America should “produce more energy here, like oil and natural gas.” By contrast, clean-energy advocates had spent a piddling $41 million on campaign advertising.

10 ways drillers throw their weight around

Hamstringing regulators: Thanks to the “Halliburton loophole” championed by Dick Cheney and snuck into the 2005 federal energy bill, fracking is exempt from the Safe Drinking Water Act. The Obama administration has proposed requiring drillers to share information about their fracking chemicals, but only on some federal lands—after the drilling is complete.

Working the chain of command: An EPA report linking fracking to groundwater contamination was postponed after Wyoming Gov. Matt Mead contacted the agency, giving state oil and gas regulators time to try to debunk the findings.

Not recalling: The Coalition for American Values Action, which runs the pro-fracking website ProtectSandMining.com, poured more than $400,000 into the Wisconsin recall election this summer. As a nonprofit, it doesn’t have to disclose the source of its money.

Swilling on the Hill: In July, the American Petroleum Institute held the “hydraulic fracturing event of the summer” in DC, where congressional aides could indulge in a “Fracktini.”

Writing the rules: The American Legislative Exchange Council, which creates and promotes pro-business legislation, is pushing a model state law that lets drillers refuse to disclose fracking chemicals they consider “trade secrets.” The bill, pushed by ExxonMobil, has passed in Illinois, Ohio, Pennsylvania, and Texas, and has been introduced in New York.

Drinking your milkshake: In many states, drillers can extract gas without a landowner’s permission if a certain percentage of neighbors living over the deposits give their consent.

Gagging the doctors: A Pennsylvania disclosure law seems to bar physicians from telling patients which fracking chemicals they’ve been exposed to.

Sitting on their data: After gas companies complained about incomplete data in a peer-reviewed study linking drilling to groundwater contamination, ProPublica revealed that they’d already compiled the extra data—but refused to share it with the researchers.

Playing dead: At least 14 states ignore fracking entirely. This past May in California, where fracking has quietly proceeded for nearly 60 years, lawmakers narrowly struck down a bill that would merely have required drillers to disclose where they plan to frack.