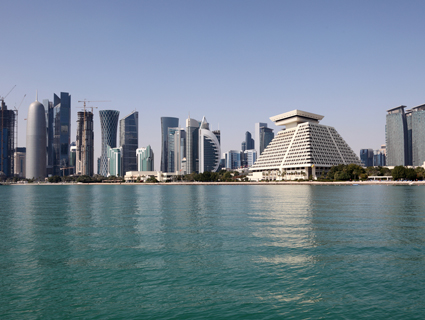 You’re forgiven if you haven’t heard that US negotiators are back at the table discussing global climate policy, this time in Doha, Qatar.

The 18th Conference of the Parties under the United Nations Framework Convention on Climate Change (or, more simply, COP18) hasn’t received nearly the attention of its predecessor in Copenhagen in 2009, or even the past two years in Cancun, Mexico, and Durban, South Africa. I’ve been at the past three COPs, but won’t be traveling to Doha this year, for the simple reason that nothing big is expected to happen. Any progress this year will likely be decidedly small—but that’s okay, too, since setting the hurdles low might mean negotiators can actually clear them.

First, let’s do a quick refresher on negotiations to date. These things go back, as you might guess, 18 years, to the first meeting in Berlin. In 1997, major developed countries signed onto the Kyoto Protocol—though the US famously never ratified the treaty. Flash forward to 2007 (I said this was going to be quick), where the US negotiators representing the Bush administration got booed for blocking progress toward a Kyoto successor and made an about-face, agreeing to what became known as the “Bali roadmap,” which said we would reach a new, binding commitment on a climate treaty that included the United States as well as major emerging economies like China and India by 2009. And then the US elected a new president who promised that his would be an era in which “the rise of the oceans began to slow, and our planet began to heal.”

So, heading into 2009’s meeting in Copenhagen, expectations were high (Like, we-put-it-on-the-cover-of-our-magazine high.) And then … spectacular failure. Or, marginal political progress, depending on how you looked at it. At the last minute, the United States and some—not all—other nations signed a political accord that laid out some goals (not to be confused with legally binding promises), like limiting warming to no more than 2 degrees Celsius and creating a $100 billion pool of money for poor nations dealing with climate change. The Cancun meeting in 2010 officially adopted the previous year’s accord into the UNFCC framework, and made some progress on hashing out some of the points. And then last year in Durban, world leaders agreed to yet another new timeline that would have them drafting a legally binding global climate deal in 2015 that would not take effect until 2020. (Just take your time, guys. It’s not like climate change is an urgent problem or anything, right?)

One of the most important outcomes in Doha is likely to be a work plan for the next few years. If there’s going to be a legally binding commitment in 2015, there needs to be an outline of how we get there from here, with deadlines and goals. There isn’t one right now.

One issue Waskow is following closely is the climate finance negotiations. The “fast-start” financing—the initial $30 billion in pledges that developed nations agreed to put toward mitigation and adaptation between 2010 and 2012—effectively ends this year. Nations aren’t going to stop providing that aid, but the initial commitments are over and they need to figure out how and how much they’re going to provide additional funding between now and 2020, when the long-term financing through the Green Climate Fund is supposed to be fully mobilized. Meanwhile, there is still a lot of progress to be made on figuring out where those long-term financing dollars are going to come from.

Right now, the world is on a path that would blow right by the 2 degree warming target and head straight for 4 degrees, which would have disastrous effects.

Then there is still the question of ambition on the mitigation front. While the parties have put forward their own 2020 emission reduction targets, they still need to determine whether those targets are strong enough, and what comes after 2020. Right now, the world is on a path that would blow right by the 2 degree warming target and head straight for 4 degrees, which would have disastrous effects.

Another important issue facing negotiators is a second commitment period for the Kyoto Protocol. The initial period concludes at the end of 2012. Japan, Russia, Canada, and, most recently, New Zealand have said they won’t sign onto another commitment period under Kyoto. All of them have said they want to wait for a new treaty that includes the United States and China before they’ll make a new commitment. That leaves the European Union and Australia as the only major emitters still standing behind Kyoto, but it’s better than nothing.

Lastly, there’s the eternal X factor at these negotiations: the United States. Counterparts from European and vulnerable nation delegations routinely criticize the US as the major reason these negotiations lack ambition. Our ongoing standoff with China has been a key challenge, with both parties waiting on the other to take the lead. (And since the US has been a developed nation for much longer than China, other nations tend to give us the stink eye for continuing to drag our feet.)

Now that President Obama has won a second term, NGO observers are hoping negotiators will take a stronger approach. “I believe the US needs to push the reset button on international climate diplomacy,” said Jennifer Morgan, director of the climate and energy program at the World Resources Institute. “I think right now the world sees the US strategy as pulling the world down to what’s politically possible in the US on climate change, rather than working with the world on trying to avoid 2 degrees and building the politics to be able to respond to the challenge.”