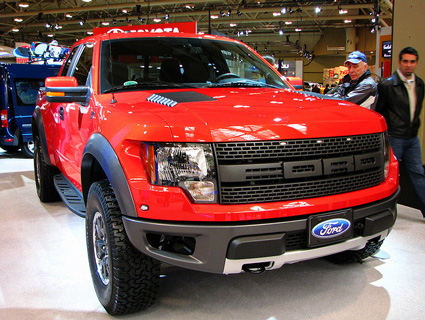 This story first appeared on Slate and is reproduced here as part of the Climate Desk collaboration.

When anonymous Ford executives told the Wall Street Journal this summer that the company would be switching out the steel body of its iconic F-150 pickup for an all-aluminum one beginning in 2014, many brand loyalists at the Ford Truck Enthusiasts forum were somewhat skeptical. Price was a concern, given that aluminum can cost as much as four times as much as steel. Others noted that aluminum is harder to repair, given that fewer body shops equipped to work with the metal: “(I)t’s not like you can just have a dent service repair it when you get a door ding or worse.” And then there was the toughness factor, with many complaining that aluminum just doesn’t evoke that same masculine/cowboy/fulfilled-by-manual-labor aesthetic: “I like my old steel pickup, I like the feeling of having heavy protection rather then [sic] feeling like a soda can on wheels.”

Ford would later call the executives’ prediction “premature.” Still, it prompted the question: Why would America’s most popular pickup risk alienating its base? Because as the Ford execs noted, an aluminum body would shave 700 pounds off of the truck’s total weight—and the less weight the engine has to move, the less gas it will have to use. “Weight reduction,” Ford’s global chief of product development told the Wall Street Journal, “is going to be a big part of our strategy.”

It is possible that the gains in fuel economy will attract new customers, mitigating the loss of those loyalists who prefer the more traditional steel horse. And maybe Ford is seriously concerned with the health of Mother Earth. But it also didn’t have much of a choice.

In July 2011, the Obama administration reached an agreement with 13 major automakers—Ford included—along with the UAW and the EPA to dramatically increase vehicle fuel efficiency standards on all cars and light trucks sold in the United States: By 2025, every carmaker’s fleet would have to average 54.5 miles per gallon. It represented a near-doubling of the current standard of 29 miles per gallon—roughly the highway fuel efficiency of a Ford Taurus.

Environmental groups mostly celebrated the move—the Union of Concerned Scientists, for instance, deemed it “a very positive development.” (Although, as financial writer Felix Salmon at Reuters has noted, the new standard will still leave us lagging behind just about every government fuel efficiency standard in the developed world.) Conservatives were, predictably, not enthused. When the terms were finalized a year later, a post-primary and pre-centrist Mitt Romney called the measures “extreme,” arguing that they would “limit the choices available to American families.” In an article titled “Obama’s Sneaky, Deadly, Costly Car Tax,” conservative columnist and paid hysteric Michelle Malkin warned that the “draconian environmental regulation … will cost untold American lives.”

Perhaps a bit more amenable to regulations because of the bailout, automakers publicly offered their endorsement. But there was some market wariness about both the desire for such vehicles and the quick timeline for such a major move. The Alliance of Automobile Manufacturers, an industry trade group, called the new standards “ambitious,” “aggressive,” and “very, very challenging,” noting how slow the market pickup has been for hybrid cars, which in their decade or so of availability have failed to crack 2.5 percent of vehicle sales.

But it’s not like this call for greater fuel efficiency caught carmakers by surprise. The passage of the Energy Independence and Security Act in 2007 had already set a goal for the national fuel economy standard of 35 mpg by 2020—marking the first substantive change since Congress set the original standard of 27.5 mpg in 1975 (to be reached by 1985) in the wake of the oil crisis. Obama’s two subsequent goalpost relocations—first pushing Bush’s original plan up to 35.5 mpg by 2016 and then extending it with the 54.5-by-2025 plan—just demanded that carmakers act a bit more quickly.

So now the auto industry is forced to tackle something they were able to mostly ignore for a quarter of a century. And with Obama’s re-election, reality just renewed its lease. Where to start?

Some have opted for the direct route, tinkering and tweaking the engine. GM’s new Corvette, for instance, offers something called “active fuel management,” in which the car cuts off half of the engine’s cylinders during what it calls “light load” situations like highway coasting. Ford’s new Fusion model offers a similar fuel saving function—a “start-stop” feature that shuts the engine down when the car is idling. All of the Big Three are even rolling out models that run clean diesel—a more efficient, low-sulfur version of the fuel—in 2013.

But all of that takes painstaking engineering and lots of R&D hours. The quicker, easier route to fuel efficiency, it seems, is the one Ford is pursuing with their lighter aluminum F-150: focus on the materials, not the mechanics.

And Ford’s aluminum trial is no outlier. This summer, the director of automotive marketing for aluminum giant Alcoa told the crowd at the American Metal Market’s Aluminum Summit that increased calls for fuel efficiency will double the demand for aluminum by 2025. Sure, that’s what a director of marketing is supposed to say at an “aluminum summit”—but Alcoa’s $300 million investment in a Davenport, Iowa, plant that specializes in automotive products backs this up. So do numerous new car rollouts with full aluminum bodies. Range Rover’s 2013 American Land Rover model is taking the same approach as the Ford F-150 and getting the same result, trimming 700 pounds from what was previously a 5,500-lb SUV. Chrysler’s Dodge Ram and Chevy’s Silverado pickups are rumored to be getting the same aluminum overhaul in 2017 and 2019, respectively.

And Ford is working on something that will surely offend the pickup purists: car hoods made of carbon fiber, a material favored by racing bikes that company engineers claim could offer ten times the strength of steel at a quarter of the weight. Next year, BMW will also hit the market with an electric car that boasts a full carbon fiber body, the first production vehicle of its kind.

Automotive concept challenges and engineering competitions have been adding energy to the industry push, too. Two years ago, a superlight concept car (literally called “the Very Light Car“) won a $5 million Progressive X Prize that tasked contestants with building vehicles that could achieve a mythical 100 mpg. (It got 102.5 mpg.) This year’s Michelin Challenge Design competition is titled “HALF! Lightweight with a Passion” and is (excitedly!) searching for ideas on lowering the weight of a family car “through materials choices and using the most effective manufacturing techniques.”

All of this new materials research and innovative approaches to reducing car weight, though, are just reducing the fuel problem—not solving it. Most of these vehicles—even the Very Light Car—still rely on the internal combustion engine and its baggage of bad state actors, finite capacity, and deleterious environmental effects.

But there is an alternative vehicle with a weight problem that could really benefit from all of this: the electric car. The heavy battery pack—the Nissan Leaf’s 660-pound battery accounts for about 20 percent of its weight—and subsequent hampering of battery efficiency is one of the most common complaints about the plug-ins.

If carmakers can continue to dramatically pare down the weight of car’s frames, hoods, and panels, it could provide the electrics with an immediate solution to their market problems while battery makers do the long work of lightening their own loads. And what started as a short-term fix for fuel efficiency just might end up offering some serious long-term benefits for fuel independence.