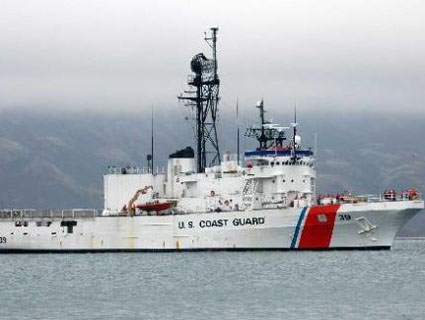 This story first appeared on Grist and is reproduced here as part of the Climate Desk collaboration.

I’ve been working this case relatively nonstop since the 27th.

Petty Officer First Class David Mosley didn’t sound all that tired when I spoke with him yesterday, but, then, he’s a public affairs specialist, a professional. A few times he stumbled over his words, once or twice forgot specific numbers. On the whole, though, no problems as he walked me through the massive complement of US Coast Guard staff and sea vessels and aircraft deployed to fix Shell’s mistake.

Two weeks from yesterday, the Kulluk, a drilling rig managed by Noble Drilling and owned by Shell, broke free of its tow lines as tug boats struggled in inclement weather to move it away from the Alaskan shore. On Dec. 31, it ran aground within an important bird area on Kodiak Island. A unified command comprised of representatives of Shell, Noble, the Coast Guard, the state of Alaska, and local representatives spent the next week and half determining whether the rig was safe to move and, ultimately, moving it to a nearby harbor. Some 700 people were involved in the effort by the time it had been safely docked.

How many of that 700 were from the Coast Guard? “That’s a very good question,” Mosley told me. He noted that “the command center at Coast Guard Center Anchorage was very much involved in the unified command,” proving the point by listing just the people who came to mind:

Captain Mehler, the federal on-scene coordinator, all the way down to your storekeepers and yeomen and people like myself, public affairs specialists, who were all swept up and involved in this in some way. The people who provided support on Base Kodiak and Air Station Kodiak, moving gear around and making things happen on the base. Maintenance crews with the helicopters, the C-130s. You’ve got the crews that were involved with the Alex Haley. We had stationed the Coast Guard Cutter Hickory and the Coast Guard Cutter Spar, both of which are 225-foot buoy tenders that were activated and would have come out to the scene as needed.

The Alex Haley has a crew of 90, plus 10 officers and a four-person aircrew. The Spar and Hickory each have a complement of about 50 people. He continued:

We brought people in, whether it was our strike teams or other folks that came in from the lower 48, from California and as far away as the Carolinas. We brought in these folks that are specialized in responding to these situations. It was not only a large response locally, it was a far-reaching response.

Those folks from the Carolinas, for example, were media specialists, brought in to help Mosley handle the onslaught of questions about Shell’s latest Arctic mistake during a slow news week. The strike teams are oil spill response experts, on stand by in case the worst case happened. (It didn’t.)

Mosley explained who foots the bill for a scenario like this. There’s a federal fund, the Oil Spill Liability Trust Fund, that was set up after the 1989 Exxon Valdez spill. The fund is financed by a per-barrel excise tax on imported fuel as well as “cost recovery” from at-fault companies and any civil penalties imposed on a company responsible for a spill. It’s not clear how that money might be applied here; Mosley suggested that would be “hammered out” with Shell.

When it comes to search-and-rescue, Mosley says not to expect money back. “I have yet to see an incident in which we do search and rescue that we look for reimbursement,” he said. “That’s why the taxpayers pay us to do our jobs.” Among the Coast Guard’s search-and-rescue efforts in this case? Three round-trip Jayhawk helicopter flights out to the Kulluk, each trip rescuing six members of the rig’s 18-person crew. Bringing people back onto the rig to test its integrity. Overflights to assess damage. The Coast Guard also reached out to the Department of Defense to borrow two Chinook helicopters to transport equipment. All of that? On your tab.

When the unified command first set up shop after the Kulluk‘s grounding, it was in a Shell office in Anchorage. As the number of people involved in the response swelled, the group decamped to a nearby hotel. Among those who made the trip was Shannon Miller, who works for Alaska’s division of spill prevention and response. Probably since its role was more modest, Miller had a better estimate of how many employees of the state of Alaska worked with the command. Twenty-two, she guessed — but that doesn’t include other resources, like the emergency towing package provided by the state.

Alaska has a strategy to get its money back. The costs the state accrues are internally invoiced and calculated, and Shell will be sent a bill for whatever portion of those invoices the state feels is appropriate. (One can assume that this, too, will be “hammered out.”) The process, Miller expects, will take months. There is also an emergency response fund that can allocate money for the incident. The fund collects revenue through a two-cent-per-barrel surcharge on oil produced in the state, as well any as money recovered from companies at fault.

I reached out to Shell in both Houston and Alaska to gauge the company’s willingness to absorb costs incurred by public entities. Neither location made a representative available to answer questions by deadline. [See update at bottom.] The company did clear up one gauzy point, albeit to other outlets. As we reported earlier this week, Shell was motivated to move the Kulluk when it did to avoid paying tax to Alaska on the rig in the new year. From United Press International:

[Rep. Ed Markey (D-Mass.)], ranking member of the House Natural Resources Committee, said he questioned claims made by Shell that Kulluk was towed from its grounding [site] because of inclement weather.

“Reports that financial considerations rather than safety may have factored into Shell’s considerations, if true, are profoundly troubling,” he said in a letter to Shell Oil President Marvin Odum.

Shell spokesman Curtis Smith told Bloomberg News that avoiding a Jan. 1 tax issue in the state was “a consideration” but “not among the main drivers for our decision to begin moving the Kulluk.”

Shell made a bad bet. Hoping in part to avoid an estimated $6 million tax bill, it decided to risk the stormy weather on Dec. 27. The bet didn’t pay off.

Lucky for the company, it wasn’t only betting with its own money. It was gambling yours, too.

Update: Shell’s Curtis Smith provided this statement by email in response to my questions:

We will live up to all of our obligations related to the response and recovery of the Kulluk. Throughout this incident, we have spared nothing in terms of personnel or assets to reach this safe outcome.