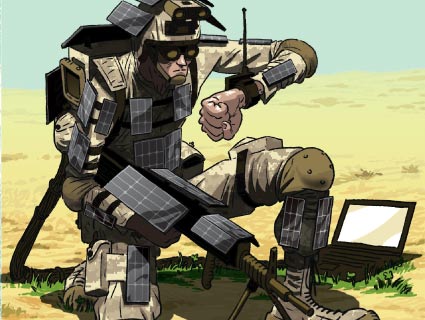 The Butterfly Effect: Why load up live insects with backpacks that absorb the energy from their fluttering wings? To power the microscopic systems that turn them into “hopping and swimming” drone aircraft. Also under consideration: nuclear-powered cyborg insects and full-size robots powered on the grasses they eat.
DARPA or Derpa? Glenn Greenwald will never look at a mosquito the same way.

Dirigible Deployment: The Walrus blimp could haul 2 million pounds of gear halfway across the world in about a week—doing the work of 50 C-130 cargo planes. Old is the new new!
DARPA or Derpa? Totally feasible, but sadly scrapped in 2006.

Hybrid Humvee: “Fuel Efficiency Demonstrator-Alpha” burns 70 percent less fuel than the standard Humvee and is so cool-looking, Michael Bay could have designed it.
DARPA or Derpa? It’s gotten a lot further than the first hybrid tank design (scuttled in 2009).

Night Mission: The Army is testing an “Eco-Enhanced Mattress Unit” made of recycled material that is easily washable and could last four to five times as long as a standard mattress.
DARPA or Derpa? Low-tech but practical as hell. A half million soldiers use a lot of mattresses.

Waste? Not! At New York’s Ft. Drum, one of the Army’s largest bases, animal and plant waste could soon light up the parade grounds, and that’s no crap.
DARPA or Derpa?? If you can power a time-traveling DeLorean on garbage, why not a military base on tree trimmings?

Eat Your Heart Out, Solyndra: At Nevada’s Nellis AFB, the largest photovoltaic solar array in North America saves $1 million annually, and is equal to taking 185,000 cars off roadways.
DARPA or Derpa? Next up: solar drones?

Legalize the Draft: Surfing Aircraft Vortices for Energy, a.k.a. convoys of heavy aircraft drafting off each other in frighteningly close formations, could SAVE fuel use by 10 percent.
DARPA or Derpa? Autopiloting 290-ton cargo jets seconds away from each other? Eep!

Big Brother in Your Tank: 30,000 vehicles are being outfitted with gas cap rings that track fuel consumption and identify needed maintenance, saving more than a million man-hours needed to check odometers. (Wait, what?!)
DARPA or Derpa? I feel the need for speed…governors?

Water World: “The US Navy is surrounded by seawater and the Navy needs jet fuel,” a Navy research scientist says. “In seawater you have CO2 and you have hydrogen. The question is how do you convert that into jet fuel?” The search for fuel cells continues.
DARPA or Derpa? Alchemy FTW!

Thar She Blows: The Navy boasts the world’s largest diesel/wind hybrid power plant…in Gitmo. It’s part of a broader initiative to green the prison base, including bicycle MPs and solar-powered floodlights.
DARPA or Derpa? Gray-waterboarding? (Sorry.)

Experimental Bases (“ExFOBs“): Both the Army and the Marines want self-sufficient, net-energy-zero bases that use hybrid solar generators, solar fridges, and microgrids.
DARPA or Derpa? For the Army, a work in progress. The Marines have ExFOBS in Afghanistan.