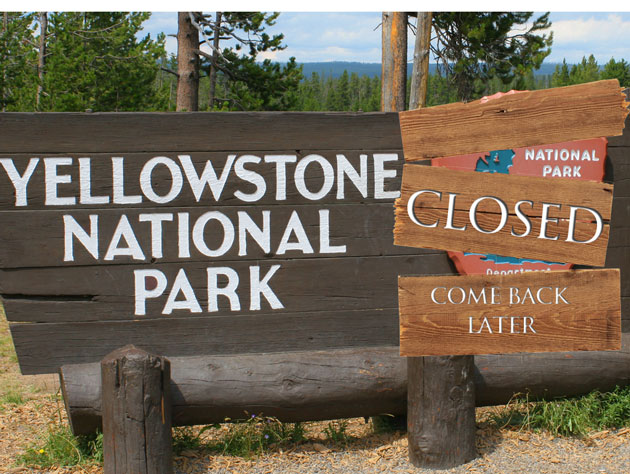 Unless Congress takes immediate action, the dreaded sequester will take effect on Friday and automatic spending cuts, amounting to $85 billion, will take effect. In addition to slashing budgets for everything from educational programs to unemployment benefits, the sequester will also gut environmental spending, setting back the minimal progress that has been made on issues like fracking regulation, alternative energy, and conservation.

On Sunday the White House released a breakdown of how the sequester will impact each state, and the results showed huge cuts to clean air and water protection with New York and California taking the biggest hits at $12.9 million and $12.4 million, respectively. Read on for a look at the six ways these cuts would hurt (or in the last case possibly help) the environment:

1. National parks: Get ready for delays in parks’ seasonal openings, shrinking services, and likely dirtier restrooms. If the sequester takes effect on March 1, the National Parks Service stands to lose $110 million. Some immediate impacts include a three-week delay in the spring opening of Yellowstone, closures of some national visitors centers along the Blue Ridge Parkway, and a $1.6 million cut to the National Mall’s budget before next month’s popular Cherry Blossom Festival. Beyond the inconvenience to visitors, the economic impact of these cutbacks is significant, as well. A report from the NPS estimated that in 2011, visitors to the national parks generated $30.1 billion in economic activity and supported 252,000 jobs nationwide. Department of the Interior Secretary Ken Salazar estimated the local economy would lose $1 million per day in revenue from postponing the opening of Glacier National Park’s Going-to-the-Sun Road by two weeks.

In a letter to the Senate Appropriations Committee, Salazar warned there would be a reduction in hours of operation for visitor centers, shortened seasons, and possible closure of camping, hiking, and other recreational areas due to insufficient staff. Additionally, more than one-fifth of all refuges would face complete closure or program elimination.

2. Clean energy development: This is one area where President Obama regularly receives high praise from environmental groups, but the meager progress that has been made will take a huge hit. “The funding reductions will be particularly devastating at a time when we are really looking to scale up this industry,” said League of Conservation Voter’s Deputy Legislative Director Alex Taurel.

“[Sequestration] would also hinder U.S. innovation as global markets for solar energy continue to grow rapidly and become more competitive,” wrote Department of Energy Secretary Steven Chu in a letter to the Senate Appropriations Committee. Reducing funding to initiatives like the Advanced Research Projects Agency–Energy, whose projects have included turning hydrogen and carbon dioxide into transportation fuel, would prevent the United States from making revolutionary changes to our energy infrastructure. The sequester would also cut funding for solar-industry job training targeted at military veterans and provided to 261 community colleges.

The president has moved to declare some public lands clean-energy zones, but in order to begin development of wind or solar energy in those zones, the US Geological Survey and the Department of the Interior (DOI) must conduct studies to examine the conflicts between renewable energy and the health of the ecosystem and wildlife. “Without the information on impact to species, that impedes the deployment of clean-energy development on public lands,” said Melinda Pierce, a lobbyist with the Sierra Club. “That is a hell of an unintended consequence.”

Food safety “could be compromised by the illegal selling and distribution of uninspected meat, poultry, and egg products.”

3. Food safety: The Food Safety and Inspection Service’s budget would be slashed by $51 million. This would result in a furlough of as much as 15 days for all employees, including 8,400 meat inspectors, as well as a loss of 2 billion pounds of meat, between 2.8 and 3.3 billion pounds of poultry, and over 200 million pounds of egg products. Meat shortages may also lead to price increases, leading to a domino effect on restaurants, grocers, and small businesses. There are also concerns that food safety “could be compromised by the illegal selling and distribution of uninspected meat, poultry, and egg products.” This wouldn’t be the first time there were public health concerns over shady meat industry.

4. Fracking regulation: There will likely be less oversight, says the Sierra Club’s Pierce. Specifically, there will be a reduction of baseline water quality monitoring networks, less money to study the effect of unconventional oil and gas extraction in the Appalachians, and not enough resources to determine how shale gas development impacts species such as brook trout and freshwater mussels.

Federal agencies like the Environmental Protection Agency and the DOI are currently developing rules and safeguards on fracking technology to ensure that drinking water is protected. “All of those efforts will be handicapped because the agency does not have the budget and personnel to carry out the critical work,” said Pierce.

Reduced oversight is of particular concern in Pennsylvania where, as we’ve previously reported, the state has been zealously going after natural gas money. “Losing another $5 million of federal money is going to just blow a huge hole in the Department of Environmental Protection’s budget,” said Bob Wendelgass, president of Clean Water Action. “It’s going to make it harder for it keep up with the range of responsibilities its got to protect our air and water, particularly with the new threats from fracking.”

5. Natural-disaster response: The cuts won’t increase the disasters themselves, but will definitely decrease our ability to fight and recover from them. Drought and climate change mean wildfires are on the rise, and the USDA warns that the agency “would complete as many as 200,000 fewer acres of hazardous fuel treatments, resulting in an increased risk to communities from wildfires.” The EPA cautions that there would be less research on how to prepare for disasters, leading to longer recovery times and higher costs.

6. Oil drilling: According to some, the oil industry is the sole victor here. “We see sequestration as an unambiguous win for the oil industry—they get to keep their billions of dollars of tax payer subsidies, while these drastic budget cuts mean less money for the EPA to monitor, limit, and clean up their pollution,” Taurel said. However, others point out that in this case, even big oil doesn’t come out on top. Because the DOI won’t have the same capacity to issue drilling permits and enforce safety regulations, offshore oil and gas production will slow down. “Some of these Republicans failing to act on the sequester are holding up the kind of government functions that allow oil and gas development off their coasts,” Pierce said.