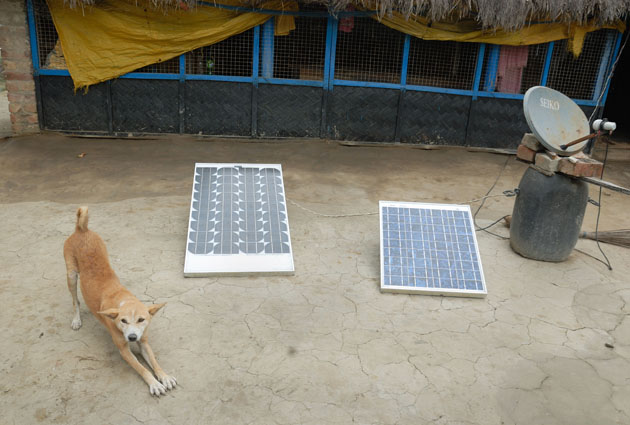 It’s a little after sundown, and Arun Kumar is hawking his wares in the neighborhood for the first time. He’s selling a light, just a small half-circle tied to a three-inch wide solar panel. An older man tests it in his home, a tiny hut of tarp and tin built like the 30 others in this far north side slum settlement. A kerosene lamp flickers inside.

At a second home, Arun wields his 1,600 rupee ($29.48) gizmo for a woman seated with nine children. He points out the small cell phone charger in the light’s rear. The woman turns inside, pulling out her phone to consult her husband.

She is one of millions in India and worldwide in a surreal contemporary fix: she owns a cell phone, but her home has no toilet or power line. The country’s mobile users mushroomed in a few short years, reaching some 900 million. Cheap phones have not suddenly lifted owners out of poverty. But they have given them access to resources and economic ladders once unreachable. 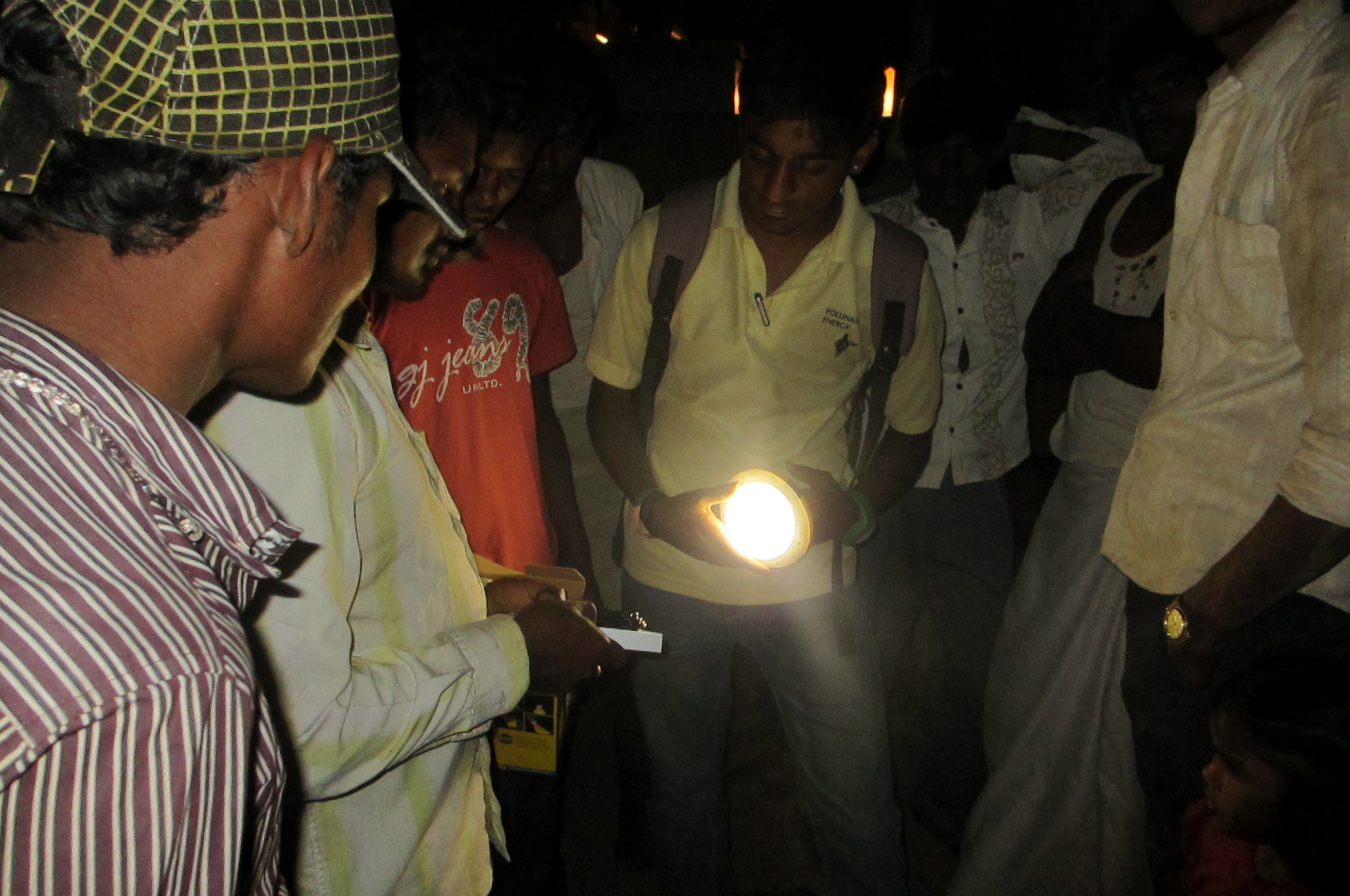 Arun fails to sell any here, yet he will return tomorrow. The hyperactive 20-year-old is a salesman for Pollinate Energy, a social enterprise NGO that has, in the past five months, sold 400 private solar systems to slum dwellers in north Bangalore. Pollinate is one of a growing number of companies betting on “leapfrog” technology designed to help the urban poor in developing nations to skip right over fossil fuels for electricity.

On their first visit to a slum, the staff never make a sale, explains co-founder Monique Alfris. Residents are understandably skeptical of consumer goods in India. Though the panels pay for themselves in about 6 months, those making three to four dollars a day are reluctant to put down the 400 rupee ($7.47) installment plan payments.

And many are transitory, like the migrant construction laborers Arun visited, nervous of investing on land they could be booted from.

When the Pollinate Energy founders arrived from Sydney, they expected urban communities to prep them for rural markets, where far more people lack power. By some accounts, Bangalore was the second Asian city, after Tokyo, to be electrified. According to estimates, only 20,000 slum dwellers here lack electricity.

That figure “is clearly wrong,” says co-founder Jamie Chivers. Of the hundred city slums they work in, only “one or two” are on the grid. A survey of their work area found 3,400 families without power in a 6-miles radius. And their urban market is a booming one.

Last week, India’s Ministry of Housing released a ‘Slum Census’ of 2011, the most comprehensive government estimation since 2000. One in six urban Indians, about 64 million people, live in slums—cramped quarters of 20 households or more in “unhygienic conditions.” (The fraction, below earlier projections of 27.5 percent, prompted the housing secretary to issue the bizarre verdict that the data “comes as a pleasant surprise.”)

The report predicted the total Indian slum population would topple 104 million by 2017. Many will clamor to get onto the grid, one India clearly cannot stretch beyond its existing users. The colossal blackout this past summer was followed by persistent shortages in several states.

Slowly, the government has begun pushing alternatives. In the winter, three states unveiled sizable solar installation plans. Rooftop solar, whose unit cost in India has dipped below diesel and natural gas, can grow quickly, from a thousand megawatts to 12,500 in four years, according to a recent report from the consultancy KPMG.

Experiments are cropping up across the country. In Ahmedabad, a company recently started offering water ‘ATMs’: stands that dispense drinking water treated with solar power.

Simpa Networks, another Bangalore startup, is trying to replicate the success of India’s mobile revolution. Co-founder Michael MacHarg recalls their first question: “Why has that grown so rapidly?” The answer is the payment model, which allows phone owners to pay as they go, in manageable increments. Since 2011, Simpa has sold over a hundred solar PV units to households across the state using a similar system. “We’re looking to be the first electricity that a family has,” explains MacHarg.

While Simpa’s focus is primarily on the unplugged rural, its first customers were a group of eight migrant families in Bangalore who make the small, cheap cricket bats swung in every Indian alley.

Arun has sold units to 13 families in a similar settlement, an established slum, tucked behind railway tracks, that makes bangles. One of the panels, tied to the tarp roof, has a thick rope through its center, blocking the sun. Another has gathered considerable dust.

But most panel owners appeared more prepared to reap the benefits. Standing in the compact home of her family of four, Amruti, an early customer, says the solar light allows her work at night and finish four times as many ornamental goods. She used to rely on squat wax candles for light.

“It’s a nice idea—the poor leap-frogging the rich,” says Chivers of Pollinate Energy. Without prior home energy, slum residents are poised to do what the West envies: kick fossil fuel habits and conserve. “They’re much more resource-efficient than the rest of us,” he says. “That’s where solar works really well.”