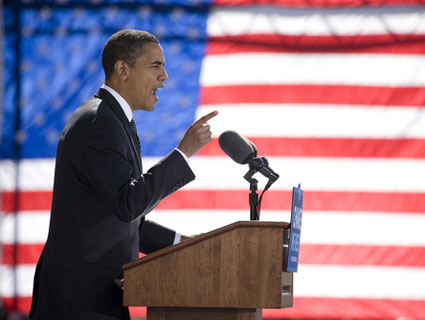 President Obama will deliver an address on climate change at Georgetown University on Tuesday, outlining, according to the White House, his “vision for a comprehensive plan to reduce carbon pollution, prepare our country for the impacts of climate change, and lead global efforts to fight it.”

Obama tipped his hand on the new plan in a video announcement on Saturday, noting that climate change “is a serious challenge, but it’s one uniquely suited to America’s strengths.”

He pledged action on climate change in his campaign in 2008, but the effort to pass a bill died in the Senate in 2010. The Environmental Protection Agency (EPA) did take regulatory action on climate-changing emissions in his first term, including increasing the fuel economy of automobiles and the first-ever rules on greenhouse gases from new power plants. But environmentalists were frustrated by what they saw as an unwillingness by Obama himself to make a strident push for comprehensive action on climate change.

Then Obama made climate change a major focal point in his second inaugural address in January, declaring that “the failure to do so would betray our children and future generations.” His speech Tuesday is the follow-up to that promise.

There has been lots of speculation about what might be in the plan. It’s pretty clear that the focus will be executive and regulatory actions, since Congress is deadlocked on this issue (and most House Republicans still don’t even think it’s a real problem). Here are four things that are expected to be included:

More renewable energy development on public lands: The administration has made it a priority to tap into the solar, wind, and geothermal potential on the 650 million acres of land that the federal government owns. Obama is expected to roll out even more initiatives on this front.

Preparing the US for climate impacts: The Obama administration created an Interagency Climate Change Adaptation Task Force in 2009, which has been putting together recommendations for how to deal with sea level rise, extreme weather, drought, and other climate-related impacts. Meanwhile, the US Global Change Research Program recently released a draft version of its next assessment, noting that climate change is “already affecting the American people.”

Politico and the Washington Post both have good rundowns on what to expect on Tuesday, as well.

Obama’s speech is not likely to include a decision on the Keystone XL pipeline, which has been a major target of environmental groups who want him to reject the proposed 1,661-mile pipeline. An announcement on that probably won’t come until the later this year, when the environmental analysis is complete.

Environmental groups issued hopeful responses to the announcement of Obama’s climate speech. “A strong climate plan from President Obama will demonstrate that this administration understands the potentially catastrophic threat posed by climate disruption and is stepping up boldly to take on this historic challenge,” said Michael Brune, the head of the Sierra Club, in a statement. “A clear and bold commitment from the President to address climate disruption also gives us hope that he is prepared to cement his legacy by rejecting the dirty and dangerous Keystone XL pipeline, ending destructive oil drilling in the Arctic, halting mountaintop removal, and abandoning dirty energy.”

It is worth noting that the EPA would play a major role in a lot of these actions, but still doesn’t have a new administrator confirmed because Republicans have been holding up the nomination of Gina McCarthy. As the assistant administrator for EPA’s Office of Air and Radiation in Obama’s first term, McCarthy was behind many of the tough new emission standards, which is exactly why Republicans have blocked her confirmation.

It’s also worth noting that while the EPA has crafted a lot of new environmental rules under Obama, many of them have been stuck at the OMB awaiting approval. Lisa Heinzerling, who was the senior climate policy counsel at the EPA from January to July 2009 and as the associate administrator of the Office of Policy from July 2009 to December 2010, has been highly critical of the administration for delaying implementation of those rules.

Without knowing exactly what Obama’s plan entails, enviros struck optimistic poses over the weekend. “I don’t know what the president will tell us on Tuesday,” said Frances Beinecke in a blog post. “If his climate plan rises to the challenge we face, it will mark a historic turning point for the future of this country, and the fate of our planet.”