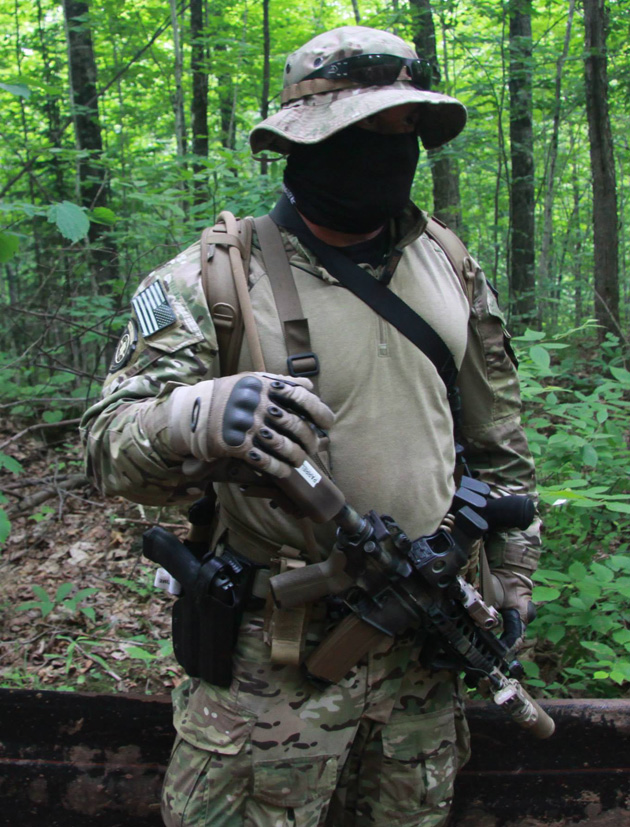 Debate over a proposed open-pit iron ore mine in northern Wisconsin went from heated to outright bizarre last week when masked guards brandishing assault rifles showed up at the site in the remote and scenic wilderness of Penokee Hills.

Local activist Rob Ganson, 56, first came upon three heavily armed guards while leading a small group on a hike to view the mining site. (The drilling site is on private land, but the owner has been given a tax break in exchange for keeping it open to public use.) The guards, said Ganson, carried semi-automatic guns, were dressed in camouflage, and wore masks covering their faces. “As you can imagine, it was quite a shock for five middle-aged people out for a walk,” he said. Ganson tried to engage the guards, but was “met with stony-faced silence.” He was alarmed but managed to grab a few photos of the men. “I was thinking if the worst scenario happened, at least there would be photos on my camera.”

After they determined that the guards worked for Arizona-based Bulletproof Security, Ganson and the other activists posted their photos of the guards online, drawing local and national news coverage of the mine, a proposed four-mile-long, 1,000-feet-deep open pit operation in Ashland and Iron counties. In June, the company began exploratory drilling in the region for taconite, a type of iron ore used in steel.

Last Wednesday, the mining company, Gogebic Taconite—G-Tac for short—a subsidiary of the West Virginia-based Cline Group, pulled the armed guards after finding that the security firm lacked permits to work in the state. A spokesman for the company has said that the Bulletproof guards will be back once they’re properly licensed.

“Basically almost every environmental protection and public health protection you could think of is eliminated under this bill.”

One of the activists in the area, however, told Mother Jones on Monday that a new group of armed guards—including one whose shirt bore the insignia for Watchmen of America, a militia group active in at least 21 states—was on patrol last Thursday, the day after Gogebic Taconite pulled the Bulletproof guards.* A spokesman for G-Tac said that the guards are necessary to protect its workers from “eco-terrorists.” The company pointed to an incident in June when protesters had a confrontation with workers; one of the protesters allegedly took a worker’s camera. But most of the protesters’ actions around the mine have been peaceful; local tribes have planted a small garden nearby, and others are leading educational tours on the ecology of the region.

Gov. Scott Walker signed sweeping changes to the state’s mining regulations into law in March, thus allowing the mine to move forward. The new law, which creates a separate set of laws for taconite mining, abbreviates the permitting process, reduces the number of opportunities for public comment, and weakens rules on dumping mine waste into wetlands and waterways. It also reallocates mining revenues that previously went to local communities into the state’s Economic Development Corporation, a problem-plagued program Walker created in 2011 to spur job growth in the state. G-Tac worked closely with lawmakers to draft the legislation. Proponents of the law argue that it will generate new jobs in the state.

But environmental groups argue that the law sets a bad precedent for environmental regulations more broadly. “Basically almost every environmental protection and public health protection you could think of is eliminated under this bill,” Kerry Schumann, executive director of the Wisconsin League of Conservation Voters.

Tribal groups, too, are worried about the impacts on the area, which is surrounded by wetlands, rivers, lakes that drain down into the Bad River and eventually into Lake Superior. The mining waste, they fear, will leach toxic chemicals like sulfuric acid into the groundwater and waterways. “If the mining company is allowed to proceed unfettered, I think what we would have is an atrocity here in the watershed,” said Mike Wiggins Jr., chairman of the Bad River Band of the Lake Superior Chippewa Indians. The Bad River reservation lies about six miles north of the proposed mine site.

Pete Rasmussen, vice president of the Penokee Hills Education Project, which has been running a public education against the mine, thinks the heavily armed guards stationed at the site are meant “fully for intimidation”—an effort to scare protesters out of the wilderness around the site. “We have been gathering more and more people who want to come up to the area,” Rasmussen said. “Once they see what’s at stake, it’s hard for them to fathom that they want to blow it all up.”

UPDATE: On Tuesday, Mike Freebyrd, CEO of Watchmen of America, told Mother Jones that the new guards are not working for his organization. “The Watchmen of America is not a security company that provides commercial security services and we are not involved in any way in the security operations with respect to GTAC mining operation in Wisconsin, nor do we sanction or approve of any of our members doing so while wearing our patches or logos,” said Freebyrd via email. “We sell many promotional materials including T-shirts, stickers, patches, pens, etc. to our public supporters, therefore we have no control if a person wears our logos while conducting activities which are not conducive to our true representation.” 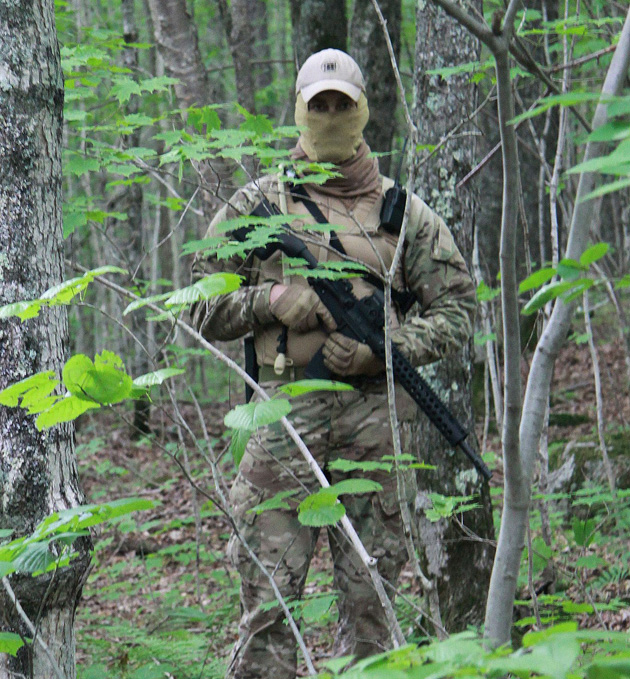