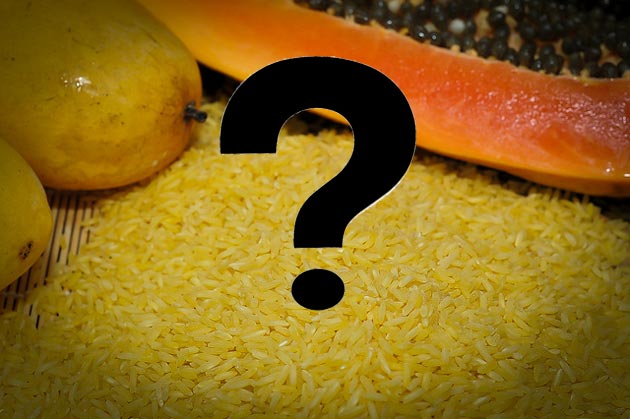 By now, you’ve likely heard about genetically modified organisms (GMOs) and the controversy over whether they’re the answer to world hunger or the devil incarnate. But for right now, let’s leave aside that debate and turn to a more basic question: When you go to the supermarket, do you know which foods are most likely to be—or contain ingredients that are—genetically engineered? A handy FAQ:

So what exactly are genetically modified organisms?
GMOs are plants or animals that have undergone a process wherein scientists alter their genes with DNA from different species of living organisms, bacteria, or viruses to get desired traits such as resistance to disease or tolerance of pesticides.

But haven’t farmers been selectively breeding crops to get larger harvests for centuries? How is this any different?
Over at Grist, Nathanael Johnson has a great answer to this question—but in a nutshell: Yes, farmers throughout history have been raising their plants to achieve certain desired traits such as improved taste, yield, or disease resistance. But this kind of breeding still relies on the natural reproductive processes of the organisms, where as genetic engineering involves the addition of foreign genes that would not occur in nature.

Am I eating GMOs?
Probably. Since several common ingredients like corn starch and soy protein are predominantly derived from genetically modified crops, it’s pretty hard to avoid GM foods altogether. In fact, GMOs are present in 60 to 70 percent of foods on US supermarket shelves, according to Bill Freese at the Center for Food Safety; the vast majority of processed foods contain GMOs. One major exception is fresh fruits and veggies. The only GM produce you’re likely to find is the Hawaiian papaya, a small amount of zucchini and squash, and some sweet corn. No meat, fish, and poultry products approved for direct human consumption are bioengineered at this point, though most of the feed for livestock and fish is derived from GM corn, alfalfa, and other biotech grains. Only organic varieties of these animal products are guaranteed GMO-free feed.

So what are some examples of food that are genetically modified?
1. Papayas: In the 1990s, Hawaiian papaya trees were plagued by the ringspot virus which decimated nearly half the crop in the state. In 1998, scientists developed a transgenic fruit called Rainbow papaya, which is resistant to the virus. Now 77 percent of the crop grown in Hawaii is genetically engineered (GE).

2. Milk: RGBH, or recombinant bovine growth hormone, is a GE variation on a naturally occurring hormone injected into dairy cows to increase milk production. It is banned for milk destined for human consumption in the European Union, Canada, New Zealand, and Australia. Many milk brands that are rGBH-free label their milk as such, but as much as 40 percent of our dairy products, including ice cream and cheese, contains the hormone.

3. Corn on the cob: While 90 percent of corn grown in the United States is genetically modified, most of that crop is used for animal feed or ethanol and much of the rest ends up in processed foods. Sweet corn—the stuff that you steam or grill on the barbecue and eat on the cob—was GMO-free until last year when Monsanto rolled out its first GE harvest of sweet corn. While consumers successfully petitioned Whole Foods and Trader Joe’s to not carry the variety, Walmart has begun stocking the shelves with it without any label.

4. Squash and zucchini: While the majority of squashes on the market are not GE, approximately 25,000 acres of crookneck, straightneck, and zucchinis have been bioengineered to be virus resistant.

5. “All natural” foods: Be wary of this label if you’re trying to avoid GE foods. Right now there is no strict definition of what constitutes a natural food. This could be changing soon as federal court judges recently requested the Food and Drug Administration to determine whether the term can be used to describe foods containing GMOs to help resolve pending class action suits against General Mills, Campbell Soup Co., and the tortilla manufacturer Gruma Corp.

Are there any foods I’ve heard might be genetically modified—but actually aren’t?
1. Potatoes: In 1995, Monsanto introduced genetically modified potatoes for human consumption, but after pressure from consumers, McDonald’s and several other major fast food chains told their French fry suppliers to stop growing GE potatoes. The crop has since been removed from the market.

3. Salmon: Currently no meat, fish, or egg products are genetically engineered, though a company called Aqua Bounty has an application in with the FDA to approve its GE salmon.

4. Soy milk: While 93 percent of soy grown in the United States is genetically engineered, most major brands of soy milk are GMO-free. Silk, the best-selling soy milk brand in the country, joined the Non-GMO Project in 2010. Many popular tofu brands in the United States also sell GMO-free tofu products.*

5. Rice: A staple food for nearly half the world’s population, there are currently no varieties of GM rice approved for human consumption. However, that could soon change. A genetically modified variety called golden rice being developed in the Philippines has been altered to include beta-carotene, a source of vitamin A. Backers are lauding it as a way to alleviate nutrient deficiency for the populations in developing countries.

How about organic foods?
Since the late ’90s, USDA organic standards have prohibited any genetically modified ingredients. Originally, the agency tried to include GE foods under the organic umbrella, but it backed down in 2002 after a massive public outcry to save organic standards.

How long have I been eating GE food?
Scientists conducted the first GE food trials the late 1980s, and in 1994, a biotech company called Calgene released the first GMO approved for human consumption: the “Flavr Savr tomato,” designed to stay ripe on the vine longer without getting squishy. The product, which Monsanto eventually picked up, flopped, but it paved the way for others: Biotech companies have made billions since with GE corn, soy bean, cotton, and canola.

Aren’t food companies required to let me know whether their products contain GMOs?
Not in the United States. Sixty-four developing and developed countries require GMO food labeling, according to Freese at the Center for Food Safety. You may have heard about the recent string of “Right to Know” bills in state assemblies across the country. The bills are aimed to require food companies to label any products that contain genetically modified organisms. Connecticut and Maine recently passed laws that would require food manufacturers to reveal GE ingredients on product packaging, but those laws won’t go into effect until other states adopt similar measures. Americans overwhelmingly support such laws, with poll after poll showing that over 90 percent of respondents support mandatory labeling. Biotech companies and the food industry say that such labeling would be expensive and pointless since genetically engineered foods have been declared safe for human consumption.

So if the food is safe, what’s all the fuss about them?
First off, not everyone agrees that GMOs are safe to eat, especially over the long term. The European Union remains decidedly skeptical, with very few approved GE crops grown on the continent and mandatory labeling in place for products that contain GMOs. Some scientists fear that GMOs could cause allergies in humans. Others point to the environmental consequences of the farming of GE crops.

How do GMOs affect the environment?
One word: Pesticides. Hundreds of millions of extra pounds of pesticides. The six biggest producers of GE seeds—Monsanto, Syngenta, Dow Agrosciences, BASF, Bayer, and Pioneer (DuPont)—are also the biggest producers of chemical herbicides and insecticides. Monsanto’s Roundup Ready crops, for example, are genetically engineered to be immune to herbicide so that farmers can destroy weeds without killing their cash crops. But the process has spawned Roundup resistant weeds, leading farmers to apply greater and greater doses of the chemical or even resort to more toxic methods to battle back the superweeds.

Where can I learn more about GMOs?
Mother Jones‘ Tom Philpott writes critically about GMOs often. In this 2011 Scientific American piece, Brendan Borrell lays out the pro-GMO case very well. Grist‘s Nathanael Johnson has written several posts that clarify the basic science behind GE crops, and a New York Times Room for Debate from 2009 offers a pretty good synopsis of the controversy. Food policy wonks might enjoy perusing the Food and Agriculture Organization’s page on biotechnology in agriculture; if you’re looking for a more entertaining way to educate yourself, a documentary called GMO OMG opens in select theaters this fall.

Clarification: Previously this story stated most tofu sold in the United States is GMO-free. While the top-selling US tofu brand Nasoya and many other major manufacturers in the US have items verified by the Non-GMO Project, this doesn’t necessarily encompass all tofu products.