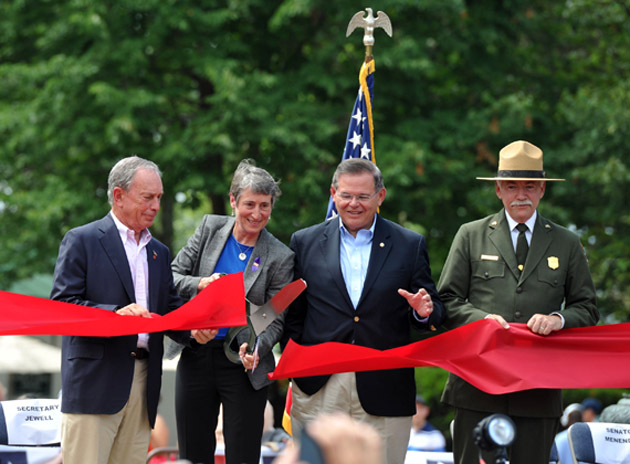 Mayor Michael Bloomberg and others at the reopening ceremony for the Statue of Liberty, which had been closed since Superstorm Sandy, on July 4, 2013.Wang Lei/ZUMA

One year after Sandy, many of the affected communities remain vulnerable to another storm because of indecision about how best to respond. There are three basic options to mitigate risks from sea level rise and storm surge: Protect against the rising tides with engineered structures, accommodate the rising waters and make structures as resilient as possible, or retreat from risky low shorelines to higher ground. Our challenge is to tailor these options to particular locations, and to balance this with cost-effectiveness and sustainability over the long run. Retreat needs to be considered not as a defeatist last-resort, but as proactive strategy needed in some places.

Take New York City, for example, where Mayor Michael Bloomberg has proposed 257 initiatives to be pursued over the next 10 years at an estimated $20 billion. He has repeatedly emphasized that the city “will not retreat from the waterfront.” But it will be hard to stand by this categorical commitment as sea levels continue to rise.

Meanwhile, New York Governor Andrew Cuomo proposed a $400 million home-buyout program, of which a meager $170 million has been HUD-approved. Only homes with damage more than 50 percent of their value are eligible. The Oak Beach community in Staten Island has applied as a pilot program for a community-based buyout, but hasn’t yet been approved. New Jersey Governor Chris Christie is encouraging rapid rebuilding while also proposing a limited buyout program. But with no funding set aside for it, he has made clear he prefers to rebuild rather than retreat.

For individual homeowners, the options are bleak. The cost to accommodate, to raise a structure—if that’s even technically possible—normally far exceeds insurance claims. But to not raise it or otherwise adapt means increasing insurance premiums by factors of five or more, making flood insurance simply unaffordable for many (though it is mandatory for mortgage holders). Selling is not a viable option either, since many home prices have plummeted below half the original cost. Owners can become trapped with foreclosure as the only option—which is why governments need to take a leading role in developing other, more feasible, options.

These options should include support for buyouts in mid-Atlantic communities, at least for coastal and estuary locations that are either at elevations of ten feet or less above the local mean higher high tide or 5 feet above the latest mapped FEMA 1 percent per year base flood elevations, whichever is higher. Once buyouts at these elevations are secured, they should progress to higher elevations.

Disallow new residential development in those low-lying elevations unless it is flood-adapted (safely moored and floatable or substantially raised with raised or floodable utility connections). With urgency, local building codes need to be re-written to take this into account, since those specifications don’t yet exist.

Know that flood-protective structures—sea gates, levees, or walls—have limits. To start, sea levels will inevitably surpass their finite design heights. But before that ever happens, they introduce their own collateral hazards. A barrier system meant to protect an estuary or river with considerable discharge could flood communities behind the protective systems.

Develop a set of land-use priorities. Infrastructure, including transportation networks, sewage treatment plants, solid waste facilities, energy supply and distribution systems, utilities, and public health facilities demand the highest priorities for adaptation, whether by protection, accommodation (some utility distribution systems could be made submergible; other system elements could be raised or made floatable); or by retreat to higher ground. In any case, for this essential infrastructure, higher flood standards need to be considered (such as the 0.2%/year flood elevations), and margins for sea level rise must be added that are in a time horizon commensurate with the expected lifetime of the facility itself. New rights of way will need to be relocated from low-lying areas to higher elevations.

These measures should be seen as an opportunity. The benefits of rebuilding more resiliently and at safer grounds can catalyze the modernization of what, for many municipalities, has become antiquated infrastructure. Subways, other mass transit systems, and road tunnels should be reconsidered before they become victims to ever more frequent saltwater flooding. Rail systems along the East Coast are a century old in their basic designs, and are located at ever more flood prone elevations and locations. Facing up to the demands imposed by climate change provides us with an opportunity to see a long overdue high-speed train network connecting storm-resilient cities.

Likewise, our energy-wasting land-use patterns should be consolidated and transformed from a suburban to a denser urbanized mode with reduced home-to-work travel time facilitated by mass transit, which not only makes us more resilient, but it just makes better sense. If we needed Sandy to advance us into a better future, we should celebrate Sandy’s first anniversary with optimism, and then get to work.

The “Rethink, Rebuild” series is a co-production of The Atlantic Cities and NYU’s Institute for Public Knowledge.