The airline industry uses about 4.5 million barrels of oil per day, or 10 percent of the oil that goes towards transportation. But there’s a sizeable difference between the carbon footprints of various airlines: According to recent research from the International Council on Clean Transportation, America’s most fuel-efficient major airline, Alaska Airlines, is 26 percent more fuel efficient than Allegiant, the least fuel-efficient.

It’s difficult to determine how much CO2 a plane burns on a given flight because many factors affect its overall efficiency. Old plane models tend to be less efficient than new ones, a plane that spends more time taxiing on the runway burns excess fuel, and empty seats on a flight result in the plane burning more fuel than necessary per passenger. Layovers make a big impact, too: Let’s say you’re flying from San Francisco to New York, for example, and have the option of choosing a layover in Chicago or Atlanta. Choosing Atlanta adds 300 miles to your trip overall, and the plane will consume 11 percent more fuel over the course of the flight than it would have on the more direct route, according to ICCT.

Planes are generally less fuel efficient than cars, trains, or Greyhound buses. In a separate analysis run by the ICCT, planes came up short of trains and cars and leagues behind the Greyhound when it came to burning less fuel. The chart below ranks modes of transportation in “miles per gallon equivalent,” which takes into account the more carbon-dense fuels that planes, trains, and buses usually use, while cars use less dense fuels. Since the ICCT measures fuel-efficiency per passenger, the number of people traveling affects the fuel efficiency of a given mode of transportation. The ICCT assumed that 2.2 people were traveling in a car (the average for mid-distance trips). Buses, which transport many people at once and don’t consume nearly as much fuel as planes, came out ahead in the ICCT analysis: 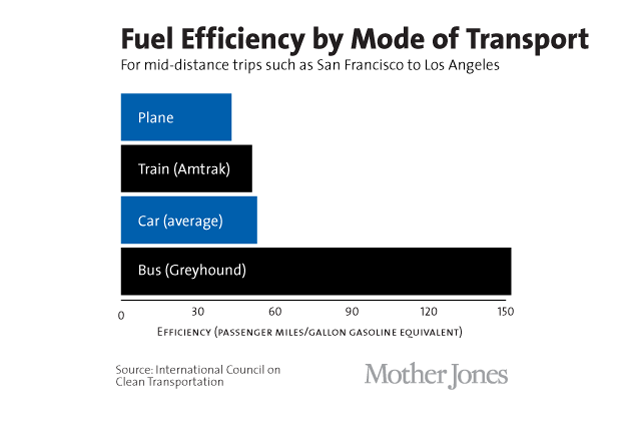 After controlling for factors like the overall number of flights per airline, the report found a whopping 26 percent difference in the fuel consumed between Alaska Airlines, which ranked first, and Allegiant Air, which ranked last on its list. 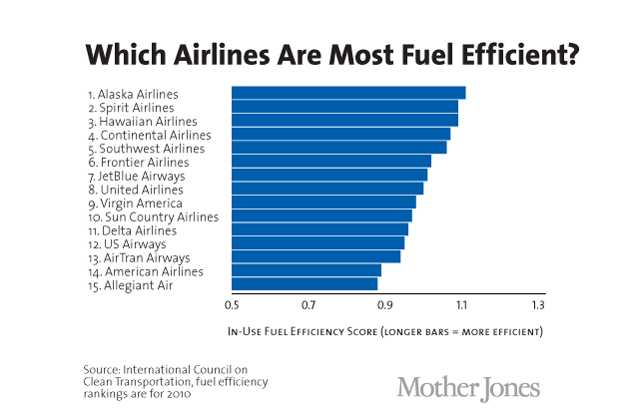