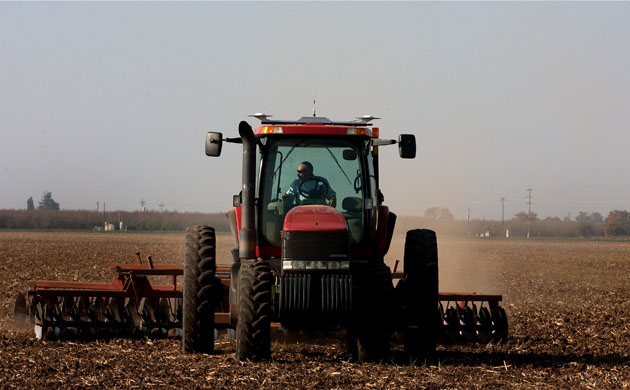 Agriculture, which uses roughly 40 percent of the world’s land, will be deeply affected by climate change in the coming years. In 2007, the Intergovernmental Panel on Climate Change predicted that warming will lead to pest outbreaks, that climate-related severe weather will impact food security, and that rising temperatures will hurt production for farms in equatorial areas. (In areas further from the equator, temperature rise is actually estimated to increase production in the short term, then harm production if temperatures continue to rise over 3 degrees Celsius in the long term.) Meanwhile, increases in the global population will make it crucial for farmers to be efficient with their land, says UC Davis professor Tu Jarvis. “The increase in food production, essentially, in the future needs to be in yields—output per acre,” Jarvis says, even while weather patterns make farming less predictable or more difficult in some places.

Monsanto, meanwhile, has been gearing up to sell its wares to farmers adapting to climate change. Here are five climate change-related products the company either sells already, or plans to:

1. Data to help farmers grow crops in a changing climate. Climate Corporation, which Monsanto is acquiring, sells detailed weather and soil information to farmers with the stated mission of helping “all the world’s people and businesses manage and adapt to climate change.” This data is meant to help farmers better plan, track, and harvest their crops, ultimately making farms more productive. According to its press release, Monsanto thinks the ag data business will be a $20-billion market, and that farmers using these tools could increase their yield BY 30 to 50 bushels (that’s between 1,700 and 2,800 shelled pounds).

In a video interview about the acquisition, Monsanto vice president of global strategy Kerry Preete told TechCrunch: “We think weather patterns are becoming more erratic, it places a huge challenge on farmers with their production. We think a lot of the risk can be mitigated out of weather impact through information,” Preete said. “If you know what’s going on every day in the field, based on climate changes, soil variations that exist, we can really help farmers mitigate some of the challenges that impact their yield.”

2. Insurance for when it’s too hot, cold, dry, wet, or otherwise extreme outside. Climate Corporation currently sells both federally subsidized crop insurance and supplemental plans that pay out additional benefits when crops go awry. While federal insurance repays farmers up to the break-even point for a failed crop, Climate Corporation insures the lost profits as well. Monsanto says it will maintain this insurance business.

Though the broader insurance industry is concerned about losses due to major natural disasters occurring more often as the result of climate change, insuring crops is less risky because payouts for a damaged crop season a generally smaller than those for dense, damaged urban areas, according to Gerald Nelson, a professor emeritus at the University of Illinois.

3. Drought-resistant corn. Monsanto lists the effects of climate change-related precipitation changes and droughts as a potential “opportunity” in its most recent filing with the Carbon Disclosure Project, explaining that “climate changes also will require agriculture to be more resilient.” The company adds that it is “positioned well to deliver products to farmers that are climate resilient.” This year, Monsanto started rolling out a new line of patented, first-of-its-kind genetically engineered corn seeds that are resistant to drought. The seeds are engineered so that they can withstand the stress of a drought by using less water when it is dry outside, but still yield the same amount of corn during a regular harvest, according to Farm Progress.

In southern Africa, where corn is the largest agricultural product, last month’s report from the IPCC predicts that by the end of the century, it is “likely” that the area will become dryer due to climate change and that this “will [increase] the risk of agricultural drought.” Though the drought-resistant corn is currently only being sold in the US, the market for hybrid corn in South Africa alone is worth an estimated $250 million, according to Reuters, and the continent has an estimated 75 million acres of land available for corn production. Monsanto has been ramping up its presence in sub-Saharan Africa through the Gates foundation-funded Water Efficient Maize for Africa program, donating germplasm (starter seeds) and drought-tolerant corn traits and, Reuters says, developing relationships with local organizations.

4. Cotton that needs less water to grow. Corn isn’t the only crop that Monsanto is reengineering for a changing climate. The company is piloting genetically modified cotton with “improved water use” that that can grow while using less water and survive drought.

The IPCC predicted in 2007 that climate change will lead to decreased cotton yields across the South in the coming years. In cotton-producing states such as Texas, water scarcity is an issue and heat waves can evaporate the water available in soil and in reservoirs, which may make water-preserving crops attractive when they come to market. States along the cotton belt, which stretches across much of the southeastern US and into Texas, have been stricken by extreme heat and drought in recent years. A recent report from NOAA found that climate change increased both the magnitude and likelihood of extreme heat waves taking place in the us but “had little impact on the lack of precipitation in the central United States in 2012.”

5. Crops for biofuel. Since 1993, Monsanto has sold high-yield, highly fermentable corn seed specifically designed to be made into ethanol—it was the first company to do so. Ethanol processors that have partnered with Monsanto through a related program buy the corn at a premium because it produces more fuel per bushel of corn. The company also sells soybeans and sorghum, which can be used to produce biofuel.

Whether ethanol is actually a “green” fuel is debatable. But in recent years, laws aiming to reduce greenhouse gas emissions and reliance on foreign oil have helped boost its production, and if corn-based ethanol continues rising in demand, “the financial opportunity could be significant for the business,” Monsanto says in its Carbon Disclosure Project filing.