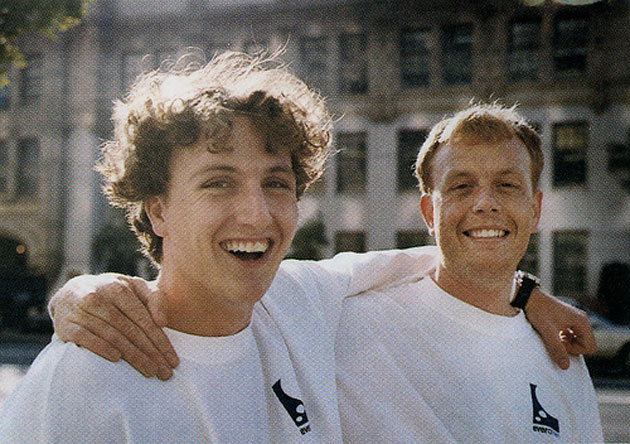 In 2004, Lyndon Rive was in an RV on his way to Burning Man when his cousin gave him five words of advice: “You should look into solar.” The way Rive tells it, it sounds a little like Mr. McGuire in The Graduate telling Dustin Hoffman to think about plastics.

Except that Rive’s cousin is Elon Musk. And Musk’s runic advice has led to a $5 billion business that is reshaping how Americans get their electricity.

Just 27 at the time of that RV ride, Rive was already the co-founder and chief executive of a Silicon Valley information-technology business, Everdream, which sold desktop management services to small businesses. It was flourishing, but Rive felt unfulfilled. “I just had this bug I had to address, which is that we have to change the way we burn fossil fuels,” he says over coffee in Manhattan this past summer. “We just have to.” The intensity with which he states this is startling.

Rive had always looked up to Musk, his eldest cousin, billionaire co-founder of PayPal, SpaceX, and Tesla. Unlike Musk, Rive is not an inventor or a technological genius. He was nearly expelled from high school in South Africa, never went to college, and at one point, secured a US visa not by his technological prowess but by his skill at the little-known sport of underwater hockey. But he’s always had a nose for unconventional business opportunities, and he shares Musk’s attraction to seemingly impossible challenges. So when Musk mentioned solar, Rive took the suggestion seriously—even though he knew next to nothing about the solar-energy market.

Nine years later, Rive has built a company, SolarCity, that threatens to upset the country’s fossil-fuel-based electric-utility industry. By offering solar panels to homeowners for less than the price they’re already paying for electricity, SolarCity quickly became the nation’s largest residential solar-panel installer. As other solar startups have struggled and gone bust—Solyndra is one of many—SolarCity has roughly doubled in size each year. Its market value has multiplied sixfold since it went public in December 2012, making it the hottest clean-technology stock since Tesla.

Rive isn’t a billionaire; his share of SolarCity is 4 percent, the equivalent of about $200 million today. Despite its soaring stock, it hasn’t yet turned a profit. But the company may have already made $1 billion for Musk, who is both its chairman and largest shareholder. And if it reaches the stunningly ambitious goal that Rive has set for it—1 million customers in the next five years—Rive might just join his cousin on the Forbes list after all.

When Rive set out to learn about solar power, the residential market in the US was tiny and fragmented, with most of the work done by local installers who had more affinities with plumbing and landscaping businesses than with Silicon Valley startups. At a small industry conference, Rive says, “We kept asking questions about innovation: ‘What are you doing to change? How are you accelerating adoption?’ And no one had any answer.”

Those panel installers weren’t idiots. The obstacles to growth were real. Solar panels were expensive, and it took time and manpower to install each one. Regulations and subsidies varied from city to city and state to state. Most Americans felt they couldn’t afford solar power, even if they wanted it. Sure, they might save money over time, but the upfront costs were daunting, running upward of $20,000 for equipment, installation, and permits. The Silicon Valley venture capitalists that Rive approached weren’t interested. As a business, solar-panel installation just wouldn’t scale, they said.

Rive ignored their warnings—out of naïveté, he says now, but also out of a stubborn confidence that he’s displayed since childhood. Son of a chiropractor father and a mother who taught massage and reflexology, Rive’s business career began at age 12, when he began teaching ballroom dance lessons to adults four times his age. He started his first company at 17, selling homeopathic remedies for arthritis, constipation, and other maladies. He adopted a network-marketing model, enlisting his mother’s clients and their friends as salespeople. The money flowed in—up to $20,000 a month. Soon Rive was spending so much time on his business that the principal of his public high school threatened him with expulsion.

Rive had never been good at schoolwork anyway—he’s dyslexic—and he was already making more money than he could ever expect to in an entry-level job out of college. Instead, he sold his natural-remedies business and moved to the US There he co-founded Everdream with his brother Russell, who had expertise in the information-technology business. By the time Rive took that trip to Burning Man, Everdream was starting to attract attention from the likes of IBM, WebEx, and Dell. Rive left in 2006, and Dell bought the company in 2007 for an undisclosed sum.

With the help of a big investment from Musk, Rive founded SolarCity in 2006 with another brother, Peter. Again, Peter provided the technical expertise, while Rive brought the vision. Rive saw that people felt uncomfortable putting down thousands of dollars on new equipment for a service they were already receiving, so he adopted a model mirroring that of the existing utilities. SolarCity wouldn’t sell solar panels—it would install them on people’s roofs for free, then sell them the resulting power at a monthly rate competitive with the one they were getting from their energy company. Over the years, it has added other financing options, including lease arrangements similar to those offered by car companies. In many cases—especially in states like California, where sunlight is copious and power rates exorbitant—customers end up paying less per month than they were without the solar power.

In recent years, a slew of other startups have adopted similar zero-down financing models, including SunRun, Sungevity, and SunPower. But SolarCity has the largest market share at 26 percent, and claims to have achieved economies of scale by hiring its own employees to install and maintain the panels. The downside for SolarCity is that it requires a lot of capital to grow. The upside is that it can build a full-service brand that people recognize and trust, like Apple with hardware and software—or Tesla, which has bucked auto-industry trends by both building cars and selling them directly to consumers.

When SolarCity went public in December 2012, investors were divided on its prospects. Its growth was phenomenal, they agreed, and the residential energy market is vast, but thus far it had reinvested all of its revenues to continue growing and hiring. Since its IPO, however, the SolarCity bulls have trampled the bears, sending its stock ballooning from an opening price of $8 a share to more than $60 as of Nov. 14. When I first talked to Rive in June, he told me the company was hiring 10 people a day. It probably hired at least one just in the time it took me to finish my coffee.

There are billions to be made in the US solar power industry if it keeps growing at its present rate of nearly 40 percent per year. When I asked Rive how big he thought SolarCity could ultimately become—in his wildest dreams—he didn’t hesitate. “I think it could be the largest electric-energy company in the United States,” he said. If somehow the bottom falls out—if customers sour on the financing plans or default on their payments, if some of the panels prove defective, if a big shift in energy prices leaves solar looking as unaffordable as it did a decade ago—Rive and SolarCity could lose everything. Rive doesn’t see that happening, of course. But he insists—even more vehemently than most in Silicon Valley—that he’s not in business for the money anyway. “If I wanted money, I would have cashed out a long time ago,” Rive says. “What’s important is the mission.”