Meals for “moderately active” preschoolers—kids between two and five—should contain about 410 calories (slightly less for kids on the younger end of that range and slightly more for the older ones), according to USDA recommendations (PDF).

Yet when we looked at kids’ meals from 10 different fast-food chains, we found that all of them contained more than the recommended amount of calories—and some contained much more. The most caloric, from Carl’s Jr., had a whopping 990 calories, more than twice what a preschooler should be eating (and about 33 percent more than what’s recommended for a 10-year-old). The least caloric was KFC’s Li’l Bucket, with 570 calories.

Here’s what a Carl’s Jr. Kids’ Meal looks like—and how it would look at 410 calories: 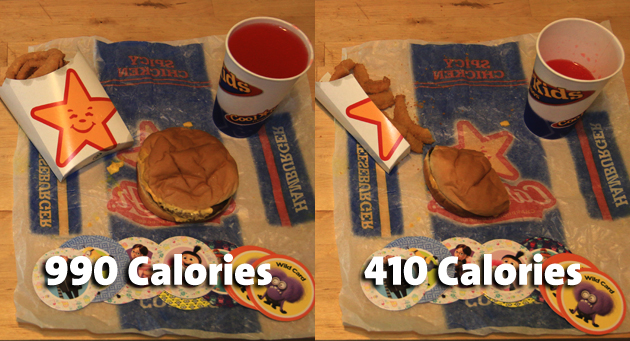 To find out how the others stacked up—and to learn how to make a healthy, kid-friendly meal in 10 minutes or less—check out the video at the top of this post. (The 410-calorie portions shown in the video are approximate, not exact.)

When we asked the fast food companies to comment on their kids’ meals’ high calorie counts, many noted that it’s possible to select a meal that adds up to 400 calories or less from their kids’ menus. For example, a Burger King representative wrote in an email:

To clarify, our kids meals are under 400 calories when selecting the following options for lunch and dinner: entrée + apple slices + fat free milk and provides 1 serving of fruit + 1 serving of dairy. If a parent chooses French fries and soda or soft serve instead of apple slices and fat free milk, the calories can reach more than 600.

But Jennifer Harris, a social scientist with Yale’s Rudd Center for Food Policy and Obesity, points out that customers don’t always opt for the healthiest combination. “When you bring in a younger kid, it’d be hard to get them interested in the apple slices, even if they are there,” she says. “Even if you show apples and milk on the ads, once the kid gets in there, they are going to be smelling French fries and wanting that.”

A Rudd Center report found that between 2010 and 2013, while there was a 54 percent increase in the overall number of kids’ meals available at 18 different fast-food restaurants, the percentage of kids’ menu items that qualified as healthy—less than 1 percent—remained the same.

The researchers noted that fast food companies spent $4.6 billion on marketing to kids in 2012. Harris points out that many fast-food chains’ advertising appeals to preschoolers. “The companies say they are not targeting kids this young, that they are actually targeting 6- to 11-year-olds,” she says. But toddlers watch a lot of television. “McDonald’s has ads with dinosaurs and animated farms. That’s perfect for really young kids.”

Here’s a quick look at the calorie counts for the kids’ meals at the 10 fast-food restaurants we visited:

And for comparison, here’s the falafel meal that we made in the video: