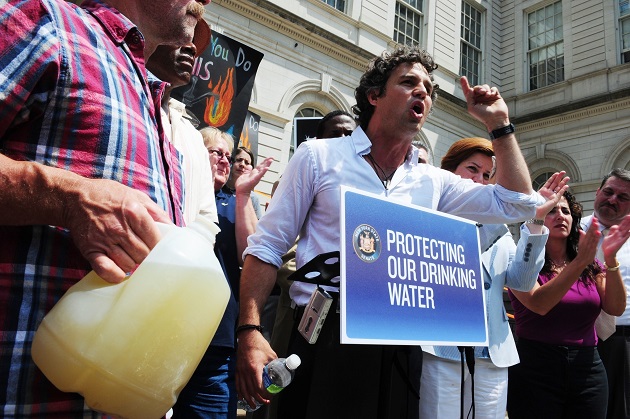 For Mark Ruffalo, environmental activism started out with something to oppose, to be against: Fracking. It all began when the actor, perhaps best known for his role as Bruce Banner (The Hulk) in Marvel’s The Avengers, was raising his three small children in the town of Callicoon, in upstate New York. At that time the Marcellus Shale fracking boom was coming on strong and was poised to expand into New York, even as the area also saw a series of staggering floods, each one seemingly more unprecedented than the last.

“That was alarming,” remembers Ruffalo on the latest episode of the Inquiring Minds podcast (stream below). “Not only alarming to me, but also alarming to all the farmers who used to make fun of me for talking about climate change and global warming.”

In response, Ruffalo launched Water Defense, a nonprofit that takes on fracking and extreme or unconventional energy extraction in general (from mountaintop removal mining to deep sea drilling), and does so with a focus on grassroots activism. In the process, Ruffalo has become quite the visible spokesman: He even unleashed some Hulk-style anger toward the energy industry on the Colbert Report. But if you think Ruffalo is just another celeb with an anti-corporate tilt, you’re missing the real story. His true passion is promoting a clean energy solution to our climate and water problems, and demonstrating how feasible it is. Today. Like, now. 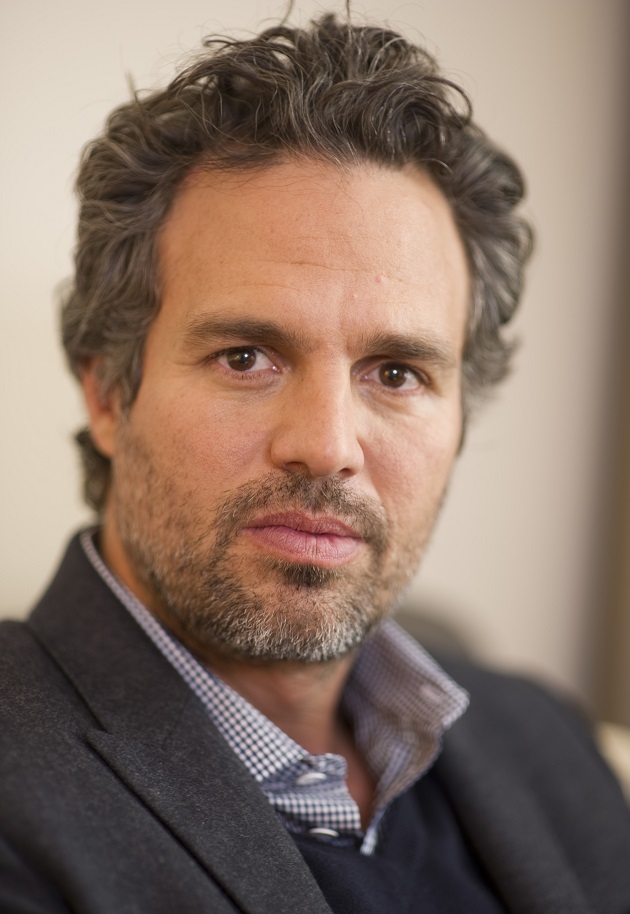 “For the first time in human history, we’re actually at a place, technologically speaking, where we can make this transition,” explains Ruffalo. “And the amount of money, and resources, that we pour into this fossil fuel infrastructure, which has been an appendage to us, like a third leg that we’re dragging around, will be freed up, and no longer will we be worrying about having to extract energy. We’ll be just harvesting what’s already pouring on us every single day.”

Ruffalo’s shift toward clean energy advocacy was a natural evolution from the fracking fight. “What I started to feel was, you can’t credibly say ‘no’ to something unless you can come up with an alternative that is equal to or better than what is being offered,” he says.

And for that alternative, he naturally turned to scientists.

Ruffalo had come across research by Mark Jacobson, a Professor of Civil and Environmental Engineering at Stanford, on the potential for the US to move to 100 percent renewable energy in the coming decades. “So I went to him and I said, ‘Hey Mark, could you make a plan for New York state based on this broad concept that the United States could actually do it, and do it in my lifetime hopefully, and definitely in my kids’ lifetime?”

Jacobson initially demurred, saying he didn’t have time to write down much more than a few paragraphs. But he didn’t hold out for long. “The next day in my email inbox I had 40 pages of what is now a feasibility study on moving New York state from fossil fuels to renewable energy by 2030,” laughs Ruffalo. That study is here; it describes a state drawing 50 percent of its power from wind (10 percent onshore and 40 percent offshore), 38 percent from various forms of solar power, and the remainder from sources like geothermal and hydroelectric power—all while saving money, producing more jobs, and even saving lives (thanks to cleaner air).

Notably, the New York state plan doesn’t just eliminate oil and coal; it also avoids nuclear power and natural gas. Here’s a figure from Jacobson’s paper, showing how much of New York’s total area would have to be devoted to clean energy projects to pull it off: 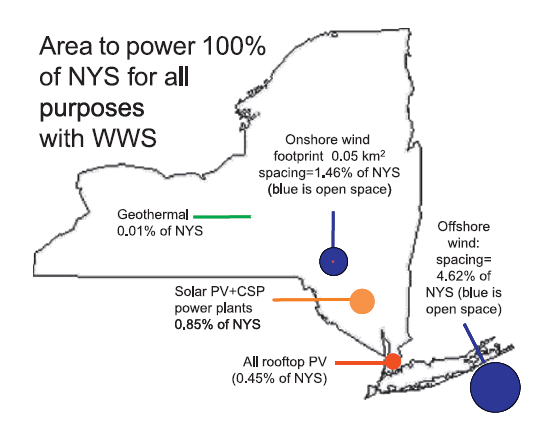 To be sure, critics have questioned the feasibility of such a swift and absolute energy transformation. But Ruffalo isn’t deterred; the New York state study was just the beginning. “In the next few months, we will be dropping 50 plans for 50 states,” he says. The draft plans for California and Washington are already available. Meanwhile, Jacobson, Ruffalo, banker Marco Krapels, and documentary filmmaker Josh Fox have formed a new organization called the Solutions Project, which declares that “it’s not enough to simply be against something”; rather, the organization wants to use “science + business + culture to accelerate the transition to 100% renewable energy.”

So is all of this just crazy and unrealistic? Consider some facts about the impressive growth of solar energy of late:

* A solar energy system is now installed every four minutes in the US, according to GTM Research. By 2016, that’s projected to be down to 83 seconds.

* According to the Solar Energy Industry Organization, the price of a solar panel has declined 60 percent just since 2011.

* Walmart is now producing more solar power at its stores than 38 US states.

But the most impressive statistics about solar power involve its abundant supply and stunning potential. According to one estimate, the amount of solar energy reaching the Earth’s surface in one and half hours exceeds the entire world energy consumption in the year 2001.

Such are the facts, but grasping what they really mean is another matter. And to hear Ruffalo talk about clean energy is to encounter a degree of optimism that is as infectious as it is rare. “We’re not getting the messaging about how wonderful a world we’re going to be living in when we make this change,” he says. People don’t know, Ruffalo continues, “what it will look like to go outside and see no smog. What it will look like to have cars that don’t make any noise, or have any exhaust come out of them.”

To help in that visualization, Ruffalo is teaming up with the filmmaker and TV personality Jason Silva to make short-subject videos about “this beautiful concept of the abundance that will be manifested to us once we move to renewable energy.” And he has partnered with Mosaic, a company that helps to crowd-fund solar projects, in a “Put Solar on It” campaign to rapidly increase the number of US solar installations in 2014 (while making money for investors along the way). Just last week on the Fox Business Network, Ruffalo could be found promoting the Mosaic project to an audience of not-exactly-lefty investors.

So will Ruffalo ever act in or produce a clean energy or global warming movie? He’s “mulling it over,” he says. “An issue has got to mature to a place that that story can be told without it smacking as a polemic,” he adds. You have to hit a kind of cultural sweet spot, sort of like what happened with Ruffalo’s influential 2010 film The Kids Are All Right, about same-sex parenting.

In the meantime, Ruffalo wants you to simply imagine what our energy future could be. “A spill for a solar panel,” he says, “is a sunny day.”

You can stream the full Inquiring Minds interview with Mark Ruffalo here:

This episode of Inquiring Minds, a podcast hosted by best-selling author Chris Mooney and neuroscientist and musician Indre Viskontas, also features a discussion of what the year 2013 meant for climate and energy.

To catch future shows right when they are released, subscribe to Inquiring Minds via iTunesorRSS. You can also follow the show on Twitter at @inquiringshow and like us on Facebook. Inquiring Minds was also recently singled out as one of the “Best of 2013” shows on iTunes—you can learn more here.