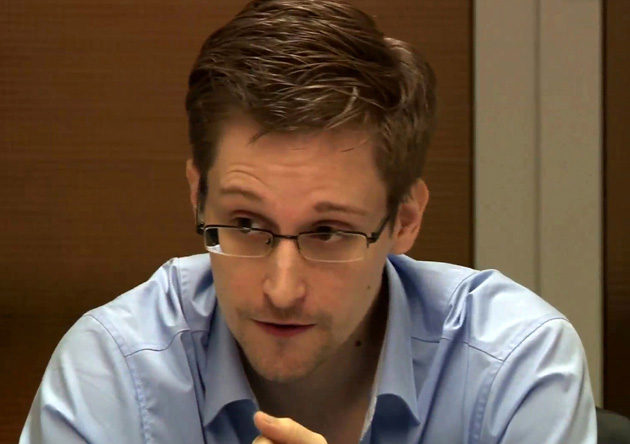 The story originally appeared on Huffington Post and is reproduced here as part of the Climate Desk collaboration.

The National Security Agency monitored the communications of other governments ahead of and during the 2009 United Nations climate negotiations in Copenhagen, Denmark, according to the latest document from whistleblower Edward Snowden.

The document, with portions marked “top secret,” indicates that the NSA was monitoring the communications of other countries ahead of the conference, and intended to continue doing so throughout the meeting. Posted on an internal NSA website on Dec. 7, 2009, the first day of the Copenhagen summit, it states that “analysts here at NSA, as well as our Second Party partners, will continue to provide policymakers with unique, timely, and valuable insights into key countries’ preparations and goals for the conference, as well as the deliberations within countries on climate change policies and negotiation strategies.”

“Second Party partners” refers to the intelligence agencies of the United Kingdom, Canada, Australia, and New Zealand, with which the US has an intelligence-sharing relationship. “While the outcome of the Copenhagen Climate Change Conference remains uncertain, signals intelligence will undoubtedly play a significant role in keeping our negotiators as well informed as possible throughout the 2-week event,” the document says.

The Huffington Post published the documents Wednesday night in coordination with the Danish daily newspaper Information, which worked with American journalist Laura Poitras.

The December 2009 meeting in Copenhagen was the 15th Conference of the Parties to the United Nations Framework Convention on Climate Change, which brings together 195 countries to negotiate measures to address rising greenhouse gas emissions and their impact. The Copenhagen summit was the first big climate meeting after the election of President Barack Obama, and was widely expected to yield a significant breakthrough. Other major developed nations were already part of the 1997 Kyoto Protocol, which set emissions limits, while the United States—the world’s biggest emitter of greenhouse gases when the protocol went into effect in 2004—had famously declined to join. The two-week meeting was supposed to produce a successor agreement that would include the US, as well as China, India and other countries with rapidly increasing emissions.

The document indicates that the NSA planned to gather information as the leaders and negotiating teams of other countries held private discussions throughout the Copenhagen meeting. “[L]eaders and negotiating teams from around the world will undoubtedly be engaging in intense last-minute policy formulating; at the same time, they will be holding sidebar discussions with their counterparts—details of which are of great interest to our policymakers,” the document states. The information likely would be used to brief US officials, such as Secretary of State Hillary Clinton and Obama, among others, according to the document.

The document does not detail how the agency planned to continue gathering information during the summit, other than noting that it would be capturing signals intelligence such as calls and emails. Previous disclosures have indicated that the NSA has the ability to monitor the mobile phones of heads of state. Other documents that Snowden has released indicate that the U.K.’s intelligence service tapped into delegates’ email and telephone communications at the 2009 G-20 meetings in London. Other previous Snowden disclosures documented the surveillance of the G-8 and G-20 summits in Canada in 2010, and the U.N. climate change conference in Bali in 2007.

The document also refers to some intelligence gathered ahead of the meeting, including a report that “detailed China’s efforts to coordinate its position with India and ensure that the two leaders of the developing world are working towards the same outcome.” It refers to another report that “provided advance details of the Danish proposal and their efforts to launch a ‘rescue plan’ to save COP-15.”

The Danish proposal was a draft agreement that the country’s negotiators had drawn up in the months ahead of the summit in consultation with a small number key of countries. The text was leaked to The Guardian early in the conference, causing some disarray as countries that were not consulted balked that it promoted the interests of developed nations and undermined principles laid out in previous climate negotiations. As Information reports, Danish officials wanted to keep US negotiators from seeing the text in the weeks ahead of the conference, worried that it may dim their ambitions in the negotiations for proposed cuts to greenhouse gas emissions.

The Danes did share the text with the US and other key nations ahead of the meeting. But the NSA document noting this as “advance details” indicates that the US may have already intercepted it. The paragraph referring to the Danish text is marked “SI” in the Snowden document—which most likely means “signals intelligence,” indicating that it came from electronic information intercepted by the NSA, rather than being provided to the US negotiators.

That could be why US negotiators took the positions they did going into the conference, a Danish official told Information. “They simply sat back, just as we had feared they would if they knew about our document,” the official said. “They made no constructive statements. Obviously, if they had known about our plans since the fall of 2009, it was in their interest to simply wait for our draft proposal to be brought to the table at the summit.”

Members of the Danish delegation indicated in interviews with Information that they thought the American and Chinese negotiators seemed “peculiarly well-informed” about discussions that had taken place behind closed doors. “Particularly the Americans,” said one official. “I was often completely taken aback by what they knew.”

Despite high hopes for an agreement at Copenhagen, the negotiations started slowly and there were few signs of progress. Obama and heads of state from more than 100 nations arrived late in the second week in hopes of achieving a breakthrough, but the final day wore on without an outcome. There were few promising signals until late Friday night, when Obama made a surprise announcement that he—along with leaders from China, India, Brazil and South Africa—had come up with the “Copenhagen Accord.”

The three-page document set a goal of keeping the average rise in global temperature to less than 2 degrees Celsius, but allowed countries to write their own plans for cutting emissions—leaving out any legally binding targets or even a path to a formal treaty. Obama called the accord “an unprecedented breakthrough” in a press conference, then took off for home on Air Force One. But other countries balked, pointing out that the accord was merely a political agreement, drafted outside the U.N. process and of uncertain influence for future negotiations.

The climate summits since then have advanced at a glacial pace; a legally binding treaty isn’t currently expected until 2015. And the US Congress, despite assurances made in Copenhagen, never passed new laws cutting planet-warming emissions. (The Environmental Protection Agency is, however, moving forward with regulations on emissions from power plants, but a new law to addressing the issue had been widely considered as preferable.)

The revelation that the NSA was surveilling the communications of leaders during the Copenhagen talks is unlikely to help build the trust of negotiators from other nations in the future.

“It can’t help in the sense that if people think you’re trying to get an unfair advantage or manipulate the process, they’re not going to have much trust in you,” said Alden Meyer, director of strategy and policy for the Union of Concerned Scientists and a seasoned veteran of the U.N. climate negotiations. Meyer said he worried that the disclosure might cause the parties to “start becoming more cautious, more secretive, and less forthcoming” in the negotiations. “That’s not a good dynamic in a process where you’re trying to encourage collaboration, compromise, and working together, as opposed to trying to get a comparative advantage,” he said.

Obama has defended the NSA’s work as important in fighting terrorism at home and abroad. But the latest Snowden document indicates that the agency plays a broader role in protecting US interests internationally.

National Security Council spokeswoman Caitlin Hayden declined to comment directly on the Snowden document in an email to The Huffington Post, but did say that “the US Government has made clear that the United States gathers foreign intelligence of the type gathered by all nations.” She noted that Obama’s Jan. 17 speech on the NSA “laid out a series of concrete and substantial reforms the Administration will adopt or seek to codify with Congress” regarding surveillance.

“In particular, he issued a new Presidential Directive that lays out new principles that govern how we conduct signals intelligence collection, and strengthen how we provide executive branch oversight of our signals intelligence activities,” Hayden said. “It will ensure that we take into account our security requirements, but also our alliances; our trade and investment relationships, including the concerns of our companies; and our commitment to privacy and basic liberties. And we will review decisions about intelligence priorities and sensitive targets on an annual basis, so that our actions are regularly scrutinized by the President’s senior national security team.”