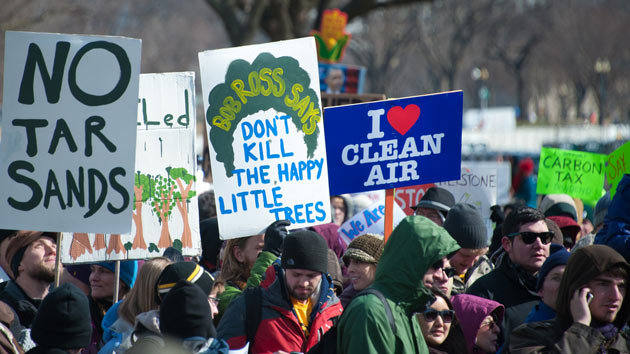 This story originally appeared in Huffington Post and is republished here as part of the Climate Desk collaboration.

The contractor that evaluated greenhouse gas emissions for the State Department’s Keystone XL report is the latest company to come under fire for its ties to TransCanada, the prospective builder of the controversial pipeline.

A conflict-of-interest statement from the consulting firm ICF International, submitted to the State Department in 2012, reveals that the company had done other work for TransCanada.

ICF International analyzed greenhouse gas emissions from tar sands oil, the kind that would flow through the pipeline, for the State Department’s supplemental draft environmental impact statement, released in March 2013. Its website states that the firm was hired to compare life-cycle emissions associated with oil derived from Canada’s tar sands to those associated with oil from conventional crude.

The final environmental impact statement (FEIS), released in January 2014, also includes ICF International on its list of preparers, with ICF staffers working on the greenhouse gas and market analysis portions of the report.

The FEIS concludes that the projected 830,000 barrels of oil that would flow through the pipeline every day would add between 147 million and 168 million metric tons of greenhouse gas emissions to the atmosphere annually. But it also says that the pipeline would be “unlikely to significantly impact the rate of extraction in the oil sands, or the continued demand for heavy crude oil at refineries in the United States.” In other words, the report concludes, those greenhouse gas emissions from tar sands oil would probably be produced with or without Keystone.

The State Department recently posted ICF’s conflict-of-interest forms on its website. Before it was approved to work on the supplemental draft EIS and the final EIS, the company had to make these disclosures.

ICF International submitted a letter dated Aug. 26, 2012, which said that the firm and its Canadian affiliate, ICF Consulting Canada Inc., had done work for TransCanada before. However, the letter said, “we have thoroughly considered the matter and are confident that this work does not represent an Organizational COI [conflict of interest] based on several important considerations detailed in the attached materials.”

Those earlier services included work as a subcontractor on the first environmental impact statement for Keystone XL released in August 2011, which was produced by the consulting firm Cardno ENTRIX. “This project represents by far the largest body of ICF work paid for by TransCanada,” ICF said in its letter. But it said the work did not constitute a conflict of interest because “the work was actually overseen and directed by the [State] Department.”

That kind of arrangement is, in fact, normal: A company seeking the State Department’s approval for a project with potential environmental impacts will fund contractors’ work on the EIS–instead of shifting the cost to the American taxpayer–while the department oversees the actual evaluation.

But that was not the ICF’s only tie to TransCanada. Its 2012 letter said that its Canadian affiliate had been retained by TransCanada Pipelines Limited since 2008–and was still doing work at the time of the disclosure–”to provide advisory services related to air emissions issues associated with operations in Canada and the US” Those services included “climate policy analysis and regulatory support.” ICF said that it was paid “less than $300,000” for that work between 2010 and August 2012, which accounted for “less than 0.1 percent” of its total revenues over that period. The company said that it believed the “nature and scale of this work do not represent an Organizational Conflict of Interest,” but that it would take “additional mitigation measures to ensure that no such conflict arises,” a description of which the company said appeared in its conflict-of-interest plans-and-procedures document. The State Department published the plans-and-procedures document, too, but it is heavily redacted and the mitigation steps are not visible.

Ross Hammond, a senior climate and energy campaigner at Friends of the Earth, said the disclosure is further evidence that the FEIS was “hopelessly compromised” and that the conflict-of-interest screening procedures “are a complete and total joke.”

ICF has also provided services to other oil interests that support the construction of the Keystone XL pipeline. The firm did consulting work in 2008 for the American Petroleum Institute, evaluating the potential effects on the oil and gas industry from greenhouse gases cap-and-trade legislation then under consideration in Congress. That study concluded that the bill would increase the cost of drilling and operating natural gas wells and would likely lead to a decrease in drilling.

ICF’s disclosures feed into the allegations that environmental organizations have been making for months about contractors for the Keystone FEIS having conflicts of interest that should have precluded them from working on the report. The State Department’s Office of Inspector General released a report last month concluding that the department had adequately followed its conflict-of-interest procedures in selecting the main FEIS contractor, Environmental Resources Management. Pipeline supporters have said that the inspector general’s report should remove any remaining barriers to approving Keystone.

But the report also noted that the process for selecting contractors requires “very little” documentation and that while those “minimal requirements” had been met, the process “can be improved.” The inspector general had made similar comments about the process in February 2012, in response to earlier conflict-of-interest complaints regarding Cardno ENTRIX.

Now the ICF disclosure is renewing environmentalists’ criticism of the FEIS report. Ross Hammond, a senior climate and energy campaigner at Friends of the Earth, said the disclosure is further evidence that the FEIS was “hopelessly compromised” and that the conflict-of-interest screening procedures “are a complete and total joke.”

“If there’s one thing that the oil industry and environmentalists agree on, it’s that Keystone XL is critical to developing the Canadian tar sands,” said Hammond. “By hiring a known TransCanada contractor to reach the opposite conclusion, State Department bureaucrats have proven that they simply cannot be trusted to oversee an objective and unbiased review of this controversial pipeline.”

“These documents were submitted to the State Department pursuant to our rigorous guidelines on selection of third party contractors,” said a State Department spokesperson in an email to The Huffington Post. “Every document submitted is thoroughly reviewed by the Department. The Office of Inspector General found that our processes not only avoided conflicts of interest, but were more rigorous than required.”

Environmental groups say that how much the pipeline will contribute to greenhouse gas emissions is a fundamental question for the Obama administration to consider as it decides whether to approve Keystone XL. While the FEIS concluded that the pipeline’s impact would be minimal, another recent study, from the group Carbon Tracker, argues that the State Department report fails to adequately consider the degree to which the pipeline would facilitate more rapid development of the tar sands because shipping the oil by pipeline is cheaper than shipping by rail. The Carbon Tracker study found that “KXL-enabled production” of tar sands oil would create as much as 5.3 billion metric tons of carbon dioxide-equivalent by 2050.

President Barack Obama said in his climate change speech last June that Keystone should be approved only if it “does not significantly exacerbate the problem of carbon pollution.” The emissions question, he said, will be “absolutely critical to determining whether this project will go forward.”

“At this point, it’s no surprise to find yet other questionable consultant on the State Department’s Keystone XL environmental study. And it’s not surprising that an oil pipeline consultant that’s currently working for TransCanada would say there’s no conflict of interest,” said Michael Brune, executive director of the Sierra Club. “But what’s really important to keep in mind is that State’s study, compromised as it was, found that Keystone XL would create a significant amount of climate pollution–the equivalent of nearly 6 million automobiles–and that the final decision rests with President Obama.”