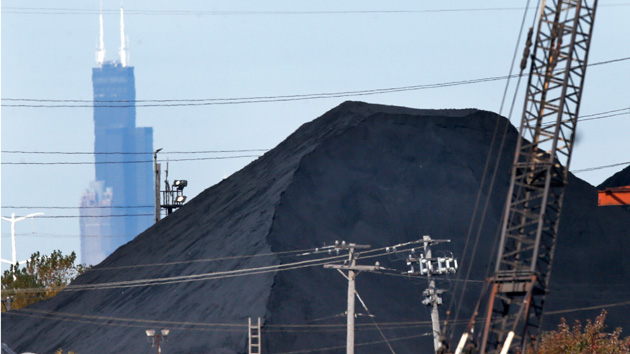 A huge mound of petroleum coke in a residential area in Southeast Chicago.Charles Rex Arbogast/AP

This story originally appeared in The Atlantic Citylab, and is republished here as part of the Climate Desk collaboration.

Jan Rodolfo went on a tour of the Southeast side of Chicago last week. When she got home, it took some time to wash off the residue of the trip. “I don’t remember touching much of anything,” says Rodolfo, the Midwest director of National Nurses United, a nationwide public-health advocacy group. “But I came home with petcoke under my fingernails that I had to work to scrub off.”

That didn’t bother her nearly as much, though, as what she saw on that tour: piles of petcoke in the middle of a residential neighborhood, right next to a youth baseball field, close to schools, and looming over backyards where children play. “I saw kids with petcoke dust on their faces,” says Rodolfo, describing the Dickensian scene. “It doesn’t rub off. You have to scrub it off.”

You might never have heard of petcoke before, but it’s a term that some people in the industrial Midwest have become all too familiar with in the last couple of years. It’s short for petroleum coke, and it’s a dusty byproduct of the tar-sands oil refining process. Sticky, filthy, and smelly, it is not something you want to find on your house, on your children’s faces, or in your lungs.

“We’re hearing reports of advanced asthma in children who are really too young. We heard of an infant on a ventilator.”

Petcoke contains a mix of chemicals including sulfur, heavy metals, and volatiles, whose health threats are not fully understood, says Rodolfo. The negative effects of the type of dust that whirls off the piles and into the neighborhood on windy days are well known, however. “Smaller particulates cause heart attacks in people who are already disposed to heart disease, asthma, and emphysema,” she says. “We’re hearing reports of advanced asthma in children who are really too young. We heard of an infant on a ventilator.”

Rodolfo’s group says that the city’s recently enacted ordinance regulating petcoke storage didn’t go far enough. The NNU wants to see a moratorium on petcoke storage on the city’s Southeast side. And local environmental activists have teamed up with the Natural Resources Defense Council to file notice of intent to sue several companies owned by fossil fuel magnates Charles and David Koch, which are responsible for the huge black piles on the Calumet River.

As refineries dealing with tar sands oil have ramped up in recent years—a boom that is growing, regardless of what ultimately happens with the Keystone XL pipeline—petcoke has become an increasingly common fact of life in some parts of the country. There is a developing market for the waste product, which can serve as a low-grade source of energy. But oil companies such as BP need a place to put it while it awaits sale and shipment (often to Asia). There’s a lot to store. Take BP’s huge new refinery in Whiting, Indiana: it will be turning out more than 2 million tons of petcoke each year.

On Chicago’s Southeast side, residents have been complaining about the black dust coming off the petcoke piles owned by KCBX, a subsidiary of Koch Industries, for more than a year now. The mounds of black refinery byproduct sit on two sites covering a total of nearly 150 acres, right alongside schools, parks, and residences in a poor and working-class neighborhood with a long, dirty industrial history. The dust gets into people’s eyes, comes through their windows, and makes their backyards effectively off-limits.

Back in February, Chicago Mayor Rahm Emanuel responded to the residents’ outcry by introducing an ordinance that he said would address their concerns. “Protecting the health and safety of our communities is the No. 1 priority in Chicago,” Emanuel said in a statement when he announced the introduction of the ordinance. “Prohibiting new and expanded facilities is a significant step to prevent petcoke dust from settling in residential areas. We will continue to work to regulate their operations to ensure our residents have the best possible quality of life.”

But the ordinance that passed fell short of an outright ban. The existing piles will stay where they are, and the operators have two full years to enclose the petcoke to prevent dust from settling on the surrounding neighborhood.

Peggy Salazar says that isn’t good enough. Director of the volunteer Southeast Environmental Task Force, Salazar is a lifetime Southeast Chicago resident who grew up when steel mills still provided hundreds of thousands of jobs to the people who lived there. “I grew up across the street from USX,” she says. “I know what it was like to live with that kind of pollution. We got rust-colored dust everywhere then. Today, we understand more about how the environment impacts us. Now that we have this better understanding, we are surely not going to stand for this.” Hence the notice to file federal suit with the NRDC.

The NRDC’s Josh Mogerman says that while the city’s ordinance is a welcome check on the proliferation of petcoke storage inside the city, his group deemed it necessary to pursue other avenues to protect Chicago residents from immediate threats posed by the petcoke piles. The suit asks the court to consider remedies under the Resource Conservation and Recovery Act, which allows citizens to seek direct protection at the federal level from environmental hazards.

“We don’t want the stuff to go in someone else’s backyard.”

Mogerman says that even as some activists continue to battle the Keystone XL pipeline, tar sands oil refining—and its byproducts—are a present-day reality on the ground, and millions more tons of petcoke waste will have to be dealt with, very soon. “As the country embraces tar sands, we need to think, how do you plan for it, where does it go?” Mogerman says. “We are going to have more and more of this stuff. Is it appropriate to be dumped in Rust Belt cities willy-nilly? Those are all questions we need to ask before it starts showing up in people’s backyards and near their schools.”

One place petcoke piled up, until recently, was Detroit. But in September 2013, then-Mayor Dave Bing ordered the Detroit Bulk Storage Company to move it out, saying they didn’t have the proper permits. It’s not clear where the waste ended up, although its reported destination was somewhere in Ohio.

Peggy Salazar’s group and its allies want to see a moratorium on petcoke storage in Chicago. They don’t just want to see it pushed into other places where people live. That kind of dumping, they say, represents an outdated view of what residents of urban neighborhoods should have to deal with. “We don’t want the stuff to go in someone else’s backyard,” she says. “I’m sure there’s other places that are not in the middle of a residential community.”

She adds that petcoke storage hardly fits with Chicago’s carefully cultivated new image as a forward-thinking, environmentally conscious city. “We find it’s an environmental injustice issue,” she says. “They say, ‘We’re green, were moving forward, we’re sustainable.’ But over here they keep us in the past. We want our community to also share in that transformation of the city. We want our community to change the way that other parts of the city are changing.”