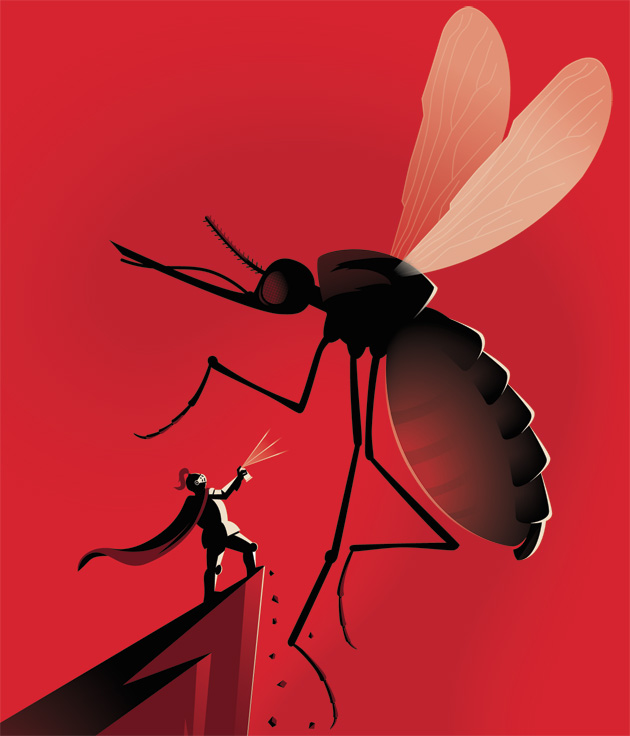 If you’re planning on spending time outdoors this summer, you’ll find that the insect repellent aisle of your local pharmacy offers a dazzling array of options to protect you from hungry bugs. Hardcore DEET-based sprays like Off! Deep Woods ($6.79 for 6 oz.) promise to ward off ticks, mosquitoes, flies, chiggers, and gnats for an entire day. Other products—such as Avon Skin So Soft Bug Guard Plus ($6.99 for 4 oz.)—contain sunscreen in addition to insect repellent. There are plenty of plant-based potions—Aromaflage ($30 for 8 ml) claims that its proprietary blend of “citrus fruit, warm cedarwood, and silken vanilla” makes for “a sophisticated, uplifting fragrance that also repels insects.” So do any of them get the job done? And do they cause problems for more than just bugs?

Scientists believe that mosquitoes choose their human victims by the scent of the bacteria on our skin and in our sweat.

What’s the big deal? I can handle a few mosquito bites. Scientists believe that mosquitoes choose their human victims by the scent of the bacteria on our skin and in our sweat. Because our bacterial communities vary, some of us are more prone to bites than others. To anyone who has scratched herself silly after a camping trip, the importance of an effective repellent is obvious. But even if you’re lucky enough to be unappetizing to mosquitoes, there’s another reason to choose your bug defense carefully: Insect-borne illnesses are on the rise, and some can be serious, even deadly. Lyme disease, which is transmitted by deer ticks, causes debilitating symptoms in more than 20,000 people every year. In 2013, 2,374 people in 48 states contracted the mosquito-borne disease West Nile virus, and 114 of them died. As climate change intensifies, public health experts expect that more breeds of mosquito will thrive in the United States. As a result, they predict an uptick in West Nile and other insect-borne illnesses, such as yellow fever. Since 2001, Florida, Hawaii, and Texas have had outbreaks of dengue, another mosquito-borne disease that had been considered eliminated in the United States since 1945.

What should I look for in a repellent? Good question. Despite massive industry lobbying, sunscreen manufacturers must now state clearly on the packaging how well and how long a product works. Repellent companies, however, are hardly required to follow any rules at all. In 2013, when the health watchdog Environmental Working Group analyzed various repellents, researchers found that manufacturers’ claims about how long products last varied widely—even with the same active ingredient in the same concentrations. Some manufacturers claimed that their products were waterproof, even though—beachgoers beware—they did not offer proof. Others boasted exotic active ingredients—like clove oil and lemongrass oil—that have not been adequately tested and may contain high concentrations of allergens. “There should be a way for consumers to compare products,” says EWG senior scientist David Andrews. “And right now, there is really not.”

Doesn’t the government have some basic rules about what they can put on the labels? Not really. Last year, the Environmental Protection Agency drafted a label template that tells consumers what kinds of insects a product protects against and how often it needs to be reapplied. But it’s completely voluntary. What’s more, the graphic will only apply to repellents that you apply to your skin, not wristbands, patches, candles, sonic devices, or any other products that claim to deter bugs.

So do those wristbands work? Not as well as skin-applied repellents. In 2011, Australian medical entomologist Cameron Webb tested mosquito repellent wristbands and found them much less effective than skin-applied products containing DEET; they only offered protection in a very small area around the wrist. “There is no product—candles, fans, coils, patches, or anything else—that I am aware of that provides comparable protection to a DEET skin-based repellent,” he says. “Even if they work a little bit, they’re not going to protect all of your exposed skin.” Spatial products such as candles, coils, and smoke do drive away bugs, though the Centers for Disease Control and Prevention notes that they “have not yet been adequately evaluated in peer-reviewed studies for their efficacy in preventing vectorborne disease.”

Studies have found virtually no health risks associated with DEET at the concentrations found in commercial repellents.

Wait, isn’t DEET toxic? No. In the ’80s, there were reports of children having seizures after using DEET-based products, but the exact cause of the seizures was never determined. Subsequent studies have found virtually no health risks associated with the ingredient at the concentrations found in commercial repellents.

Anything else I should steer clear of? EWG suggests skipping products with plant-based active ingredients, even though they sound greener; the EPA does not require registration of these substances, and no one knows how safe or effective they are. The CDC recommends avoiding combined sunscreen-repellents because sunscreen requires much more frequent application than repellent—and the effect of overapplication of repellent hasn’t been well studied. And don’t trust label claims about how long a product can last. That’s determined by the percentage of its active ingredients—but without any way to compare, consumers are left to trial and error.

So what does work? For the best protection against both mosquitoes and ticks, the CDC recommends products containing DEET. For just mosquitoes, the agency also approves of products with the active ingredients picaridin (the active ingredient in most Avon Skin So Soft products), IR3535, and oil of lemon eucalyptus—which, despite its natural-sounding name, is actually a synthetic formulation. EWG found all three of these ingredients to be just as effective as DEET. “You don’t really want to mess around with a product that might or might not work,” says Webb, the Australian entomologist. “Where insect-borne diseases are concerned, it only takes one bite.” And as for the sheer itchy misery of being a mosquito’s idea of a five-star restaurant? Well, you probably don’t want to mess around with that, either.