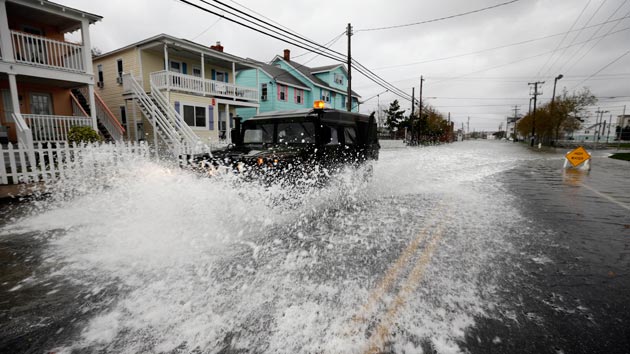 Forget the future. The world already is nearly five times as dangerous and disaster prone as it was in the 1970s, because of the increasing risks brought by climate change, according to a new report from the World Meteorological Organization.

The first decade of the 21st century saw 3,496 natural disasters from floods, storms, droughts and heat waves. That was nearly five times as many disasters as the 743 catastrophes reported during the 1970s—and all of those weather events are influenced by climate change.

The bottom line: natural disasters are occurring nearly five times as often as they were in the 1970s. But some disasters—such as floods and storms—pose a bigger threat than others. Flooding and storms are also taking a bigger bite out of the economy. But heat waves are an emerging killer. 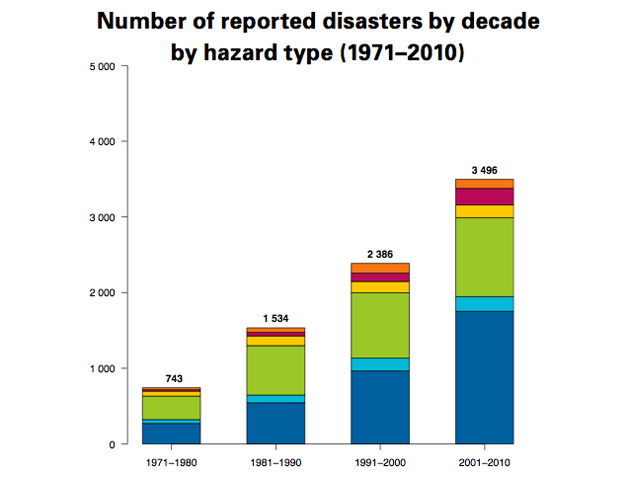 Flooding and mega-storms were by far the leading cause of disaster from 2000-2010. About 80 percent of the 3,496 disasters of the last decade were due to flooding and storms. Seas are rising because of climate change. So are extreme rain storms. There is growing evidence that warming temperatures are increasing the destructive force of hurricanes.

2) Heat waves are the new killer 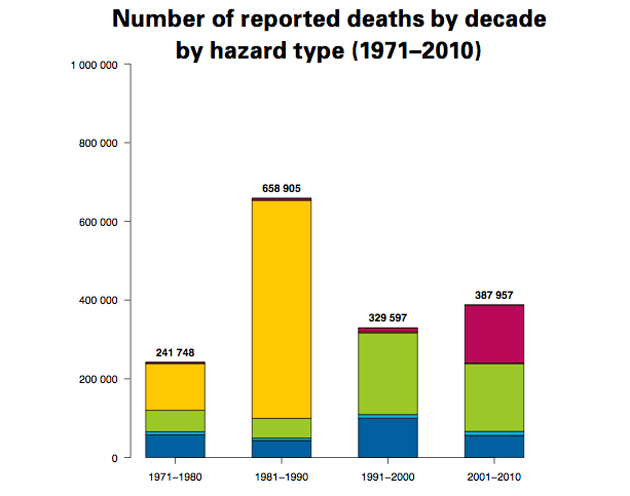 Heat waves didn’t even register as a threat in the 1970s. By 2010, they were one of the leading causes of deaths in natural disasters, along with storms. In Russia alone, more than 55,000 people died as a result of heat wave in 2010.

3) Floods are getting more costly 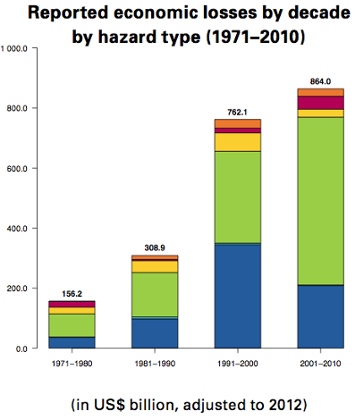 Disasters were about 5.5 times more expensive by 2010 than they were in the 1970s, and most of that was because of the rising losses due to floods. The cost of disasters rose to $864 billion in the last decade.

4) Nearly all of the 8,835 disasters—about 89 percent—were due to flooding and storms

5) But storms were by far the bigger threat to life, accounting for about 1.45 million of the 1.94 million global disaster deaths. Drought was the next big killer, mainly because of the horrific toll during the 1980s famine in Africa

6) About half of the $2390.7 billion cost of disasters over the last 40 years was due to storms, with hurricane Katrina and super storm Sandy, both in the US, accounting for $196.9 billion of those damages

7) Droughts in East Africa in the 1970s and 1980s were the deadliest disasters of modern times, killing 600,000 in Ethiopia, Mozambique Somalia, and Sudan. But storms were also a big killer for Bangladesh

8) Hurricanes and other severe storms are taking an increasing toll on the US economy. Five of the costliest global disasters were in the US. All five were caused by storms, and caused a total of $294 billion in damage