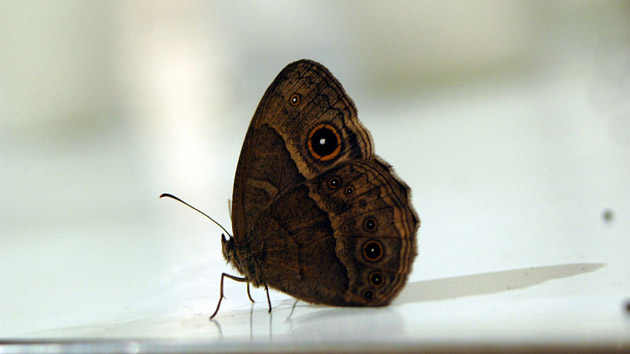 A butterfly whose wing design was altered by the artist. <a href="http://martademenezes.com/portfolio/projects/">Marta de Menezes.</a>

American artist Deborah Aschheim makes the “invisible visible”: In one series of works, she created room-size installations that allowed art lovers to walk through a nervous system, with each subsequent installation becoming “smarter” than the previous one. The sixth and final piece in the series was the most like a real brain—using motion sensors, closed circuit TVs and baby monitors, the network responded to the movement of its audience, capturing their actions and encoding “experiences” into “memories.” (For images of the fourth installation in the series, see below.)

Ascheim’s work calls into question an idea that was once widely accepted: That no two disciplines differ more greatly than science and art. The scientifically trained British novelist C.P. Snow crystallized this notion in his famed 1959 lecture about the “two cultures.” Scientists and those in the humanities, Snow said, just couldn’t communicate.

But to hear Arthur I. Miller tell it, that’s an antiquated point of view. Miller is a physics Ph.D., a science historian, and a philosopher—and an art aficionado to boot. And in his new book, Colliding Worlds: How Cutting-Edge Science is Redefining Contemporary Art, he makes the case for the existence of a “third culture” that, today, is mashing together art, science, and technology into one big domain. “There are still people who think science is science, and art is art,” says Miller on this week’s episode of the Inquiring Minds podcast. “But that is very far from the situation because it is very, very common and meaningful today for artists to indulge in science and technology in doing their work.”

Miller’s argument is supported not only by the myriad examples of artists who, like Aschheim, are highly reliant on science, but also by the surprising symmetries between how artists and scientists go about their work. One of his most important points: Scientists not only appreciate, but are in some cases driven by, aesthetic considerations. And artists don’t just pull ideas out of their imaginations: They engage in detailed work that often resembles scientific research.

“There’s aesthetics in biology: form is beautiful in biology, but it’s form as adapted to nature,” says Miller. “And when one gets into the physical sciences, one can even quantify aesthetics even more, in that, for example, we’ve heard the phrase, ‘This is a beautiful equation.'” Einstein, famously, put it like this: “The most beautiful thing we can experience is the mysterious. It is the source of all true art and science.”

At the frontier of this new culture, there is a blossoming of workshops and events in which artists and scientists are thrown together into a room and forced to interact. The thinking is that cross-pollination will occur and new creative ideas will emerge. The CERN laboratory, home to the Large Hadron Collider, even has an artist in residency program.

Here are five artists who are using cutting edge science and technology to change the landscape of contemporary art:

Deborah Aschheim—Neural Architecture. Aschheim‘s installations are inspired by her personal connection to neurological disorders; her focus has been on investigating memory, both autobiographical and collective—in part because memory disorders like Alzheimer’s disease run in her family. She’s worked as an artist-in-residence at several academic institutions, and she immerses herself into the science behind her pieces. (At the University of California, San Francisco, she and I worked together on a piece that explored the subjectivity of neuroimaging.) 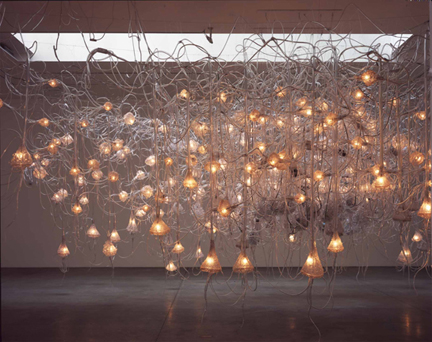 In the work pictured here, entitled Panopticon, Ascheim used 260 light cells on motion sensors, 23 pocket televisions, 3 DVDs, 3 closed circuit TV cameras, 14 nanny cams, and 4,000 feet of clear PVC tubing to create a series of “cells” in a type of neural network. This work was the fourth installment in her Neural Architecture series, in which each subsequent piece was “smarter” than the previous one—in essence, the architecture was “learning.” As people walked through the Panopticon installation, they triggered motion sensors that altered which cells were “on,” as lights in the nodes would turn on and off depending on the signal from the sensors. (See a video here.) Then, monitors inside the piece screened video footage from external galleries at the college, as well as a live feed of viewers from embedded spy cameras. This installation was not only responsive, it could also “remember”: monitors played short animated “memories” from the previous installation.

Here’s a close-up of the Panopticon:

Marta de Menezes—Modified Butterflies. Menezes creates “designer” butterflies: Not through genetic engineering, but by “interfering with the normal development of the wing, inducing the development of a new pattern never seen before in nature.” Her work of “art,” then, is actually the live animal that was altered by her vision. For examples of these butterflies see the lead image above, or below: 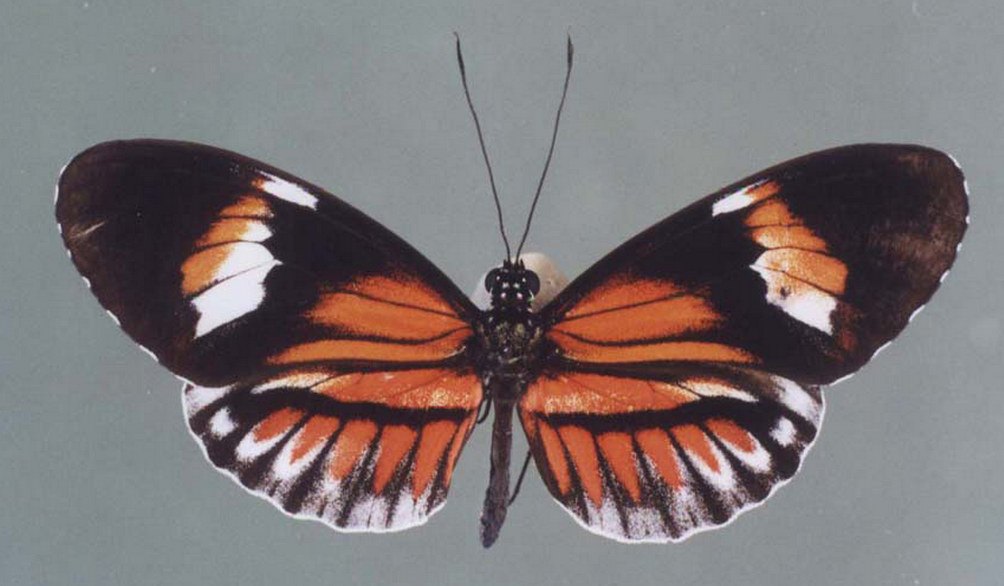 “They’re not genetically modified at all,” explains Miller of Menezes’ butterflies. “That’s the big thing about them. [Menezes] takes a hot needle and probes into the caterpillar. And out comes butterflies with asymmetrical wings.” Here’s Menezes’s description of her work:

Brandon Ballengée—Ecological Art. Ballengée is an artist, activist and ecological researcher. He participates in biology field studies, works in a lab and uses his art to document the changes that are happening in various ecosystems. His artistic products put his biological specimens on display, and his most common subjects are frogs, toads and salamanders. In his book, Miller quotes Ballengée as saying that “amphibians are a ‘sentinel’ species, the environmental ‘canaries in the coal mine.'”

In some pieces, like the one pictured here, Ballengée uses biological technology to “clear and stain” a specimen, making it transparent and highlighting certain parts. DFA186:Hades, below, was created using more than 10 different chemicals and dyes. 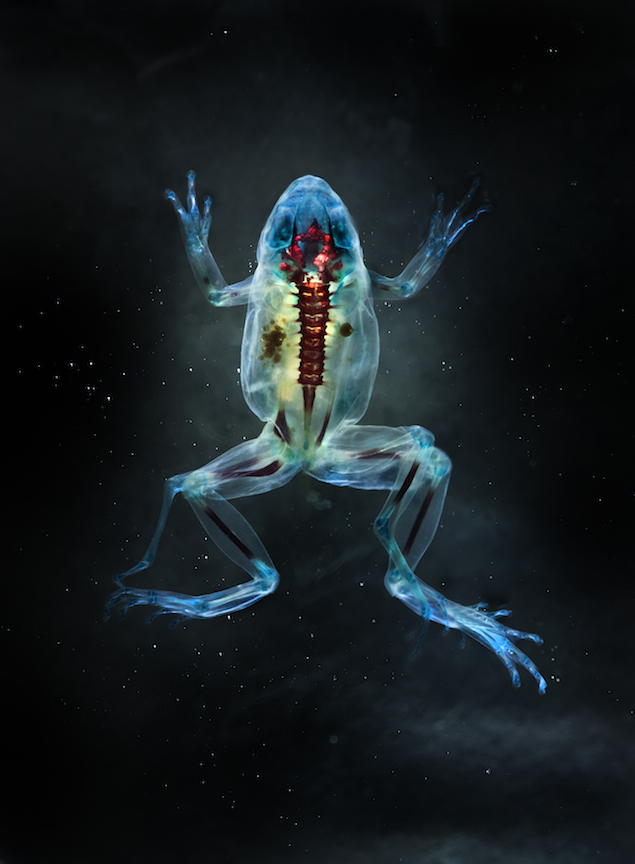 According to Ballengée’s website, his work is designed to “re-examine the context of the art object from a static form (implying rationality and control) into a more organic structure reflecting the inherent chaos found within evolutionary processes, biological systems and nature herself.”

Mark Ackerley—DNA Melody. Ackerley is a composer and former employee of 23andMe, a biotech company that pulls genetic information out of a sample of your spit and helps you research your ancestry. While working at 23andMe, Ackerley developed an algorithm that translated snippets of DNA into music. Using four different musical parameters—rhythm, pitch, timbre and key signature—he turned genes into melodies. To hear an excerpt of a DNA melody played by a string quartet, click here.

Ken Perlin—Perlin Noise. At NYU’s Media Research Lab, Perlin invented a new way of making animation more life-like. His technique, called Perlin Noise, is used by animators world-wide, including in Pixar movies. He’s even won an Academy Award for his work. “Which is something pretty good for somebody who has an undergraduate degree in physics and a graduate degree in computer science,” comments Miller.

Watch this video to see how Pixar used mathematics and Perlin Noise to create life-like moss in the film Brave:

“When I asked Perlin what he considers himself to be—either an artist or a scientist—he said neither,” recalls Miller. Rather, Perlin identifies himself simply as “a researcher.”

“In other words,” argues Miller, “the labels ‘artist’ and ‘scientist’ are becoming increasingly irrelevant.”

This episode of Inquiring Minds, a podcast hosted by neuroscientist and musician Indre Viskontas and best-selling author Chris Mooney, also features a short discussion with Joe Hanson, writer and host of the “It’s Okay to Be Smart” video series, about the science of Game of Thrones, what blowing on Nintendo cartridges has to do with your cognitive biases, new evidence disproving Bigfoot, the relationship between seeing UFOs and alcohol consumption, why men born in winter are more likely to be left-handed…and more.