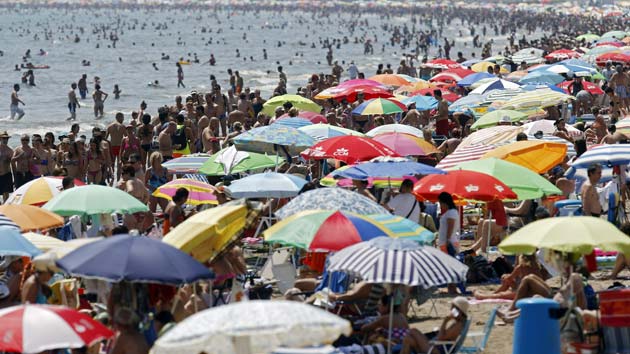 The story originally appeared in Slate and is republished here as part of the Climate Desk collaboration.

The Earth’s oceans have never been this far beyond the bounds of normal.

New data released Thursday by the National Oceanic and Atmospheric Administration showed that Earth’s oceans reached a level last month not seen since humans have been keeping comprehensive records. Global ocean temperatures in August 2014 warmed to “the largest departure from average for any month on record” according to a NOAA statement. The previous record was set just two months ago, in June 2014.

Records date back to 1880, though there’s ample evidence that the new record hasn’t been matched in much longer than that.

Climate scientists took the news with a sense of foreboding:

+ this is certainly what AGW looks like – a record hot summer globally (& yes, a few spots cooler than normal) pic.twitter.com/2eDAg49yLl

@TucsonPeck @EricHolthaus I remember being in grad school seeing these 20 year projections and thinking they looked scary…and here we are.

The NOAA data also showed the temperature of the Earth as a whole hit a new all-time August record last month, confirming similar results earlier this week from NASA and the Japanese Meteorological Agency, which use slightly different ways of crunching the numbers.

Additionally, the combined temperature of June, July, and August was also unprecedented in historical records. According to the JMA, four of the last five months have now been record-breaking for that particular month. (July was No. 2, just a hair behind the super-charged El Niño year of 1998.) The eastern United States is among the only land areas on Earth still running below normal for 2014, a legacy of the polar vortex outbreaks of earlier this year.

Later Thursday morning, NOAA expanded on the implications of the new records in a conference call, saying that on its current pace—and with the help of a newly resurgent El Niño—2014 is poised to become the warmest year ever measured.

The warming effect of El Niño, which boosts temperatures in the tropical Pacific Ocean, appears to have begun finally kicking into gear over the last week or so. In a separate announcement Thursday, the International Research Institute for Climate and Society declared that “borderline El Niño conditions have now returned in both ocean and atmosphere.” The El Niño is expected to persist until at least March 2015, affecting a range of weather patterns around the globe over the coming months.

Should 2014 become the new warmest year, a lingering El Niño means the record may not last long.

“Having an El Niño would increase the chances of 2015 at least starting out much warmer than average, and approaching record or near record warmth,” said Crouch.

The news came just days before a planned march in New York City, which organizers expect to be the largest ever mass demonstration on global warming in the world. More than 100,000 people are expected to attend, including UN Secretary General Ban Ki-Moon.