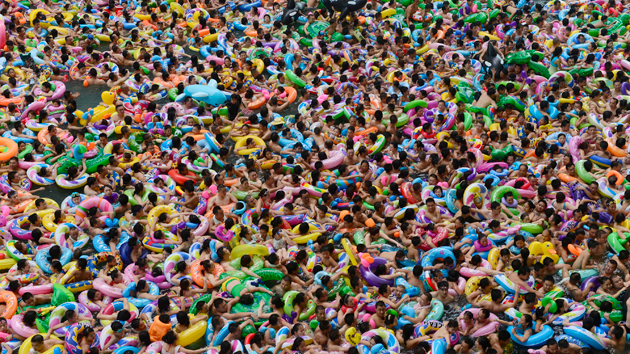 Last year was an absolute scorcher in China. In the eastern part of the country, more than a half-billion people sweltered through 31 days with daily maximum temperatures of 95 degrees Fahrenheit or more, a historical record. The heat wave killed dozens of people. Nightmare-inducing crowds swamped public pools and beaches. NASA reported that Shanghai broke its all-time temperature record three times in as many weeks. The blistering heat was accompanied by a drought that afflicted the country’s food bowl, the Yangtze River basin, that cost China around $9.6 billion. The Associated Press reported at the time that “folks are grilling shrimp on manhole covers, eggs are hatching without incubators and a highway billboard has mysteriously caught fire by itself.”

Now the verdict is in: China better get used to it. New research released Sunday reveals that 2013 was not just some statistical blip—and man-made climate change is likely the main culprit. In just two decades, 50 percent of summers are likely to be hotter than the one Chinese people suffered through in 2013, according to the study. That means extreme summers like last year’s, which normally only happen once every 270 years, could happen every other year.

The research was conducted by the China Meteorological Administration, the Canadian government, and a researcher from the University of Victoria in British Columbia, and is featured in the latest edition of the science journal Nature Climate Change. The team analyzed historical climate data in eastern China, and found that man-made climate change has caused a 60-fold increase in the likelihood of extreme temperatures since the early 1950s, when reliable national records began. Similarly hot summers are becoming increasingly likely, they found. Heat waves are also starting earlier and ending later. The five hottest summers in China since records began all happened since 2000, according to the report.

“Human influence has produced a very large increase in the probability of clustering of extremely hot summers in the twenty-first century and of long-lasting severe heat waves such as that of 2013,” the researchers write. “The increase in summer heat, combined with the region’s rising population and wealth, would produce higher risks for human health, agricultural systems and energy production and distribution systems if sufficient adaptation measures are not in place.”

The link established by the report’s authors to man-made climate change adds yet another worry for China’s leaders, who are already battling an ongoing air pollution crisis that is currently blanketing the country’s north in extreme smog. China already has an alarming climate rap sheet: It is the world’s leading emitter of greenhouse gases and the world’s top coal producer and consumer; some 70 percent of its energy supply comes from coal. As Chinese leaders throw every new technology—including fracking—at breaking its decades-long coal addiction, China promised world leaders at UN climate talks that it would peak its emissions “as early as possible”—the first time a high-ranking Chinese government official has mentioned such a target. China has also recently promised to start a nationwide cap-and-trade program to put a price on its carbon emissions. 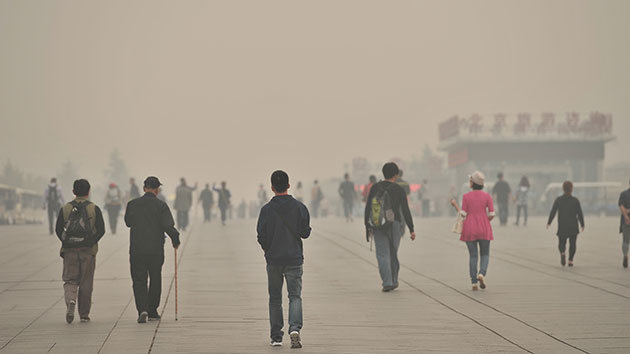 The report is the latest in a string of new research linking last year’s heat waves around the world—in Australia, China, Japan, Korea, and Europe—to climate change with an ever-increasing amount of scientific certainty.

Martin P. Hoerling, a meteorologist at the National Oceanic and Atmospheric Administration, who reviewed the study for me during an interview, said the Chinese results are useful in understanding why heat waves are happening more often around the globe. “We can generalize some of the heat wave experiences in China from these authors to other areas.”

Hoerling, who called Sunday’s Chinese study “solid” and “entirely consistent” with previous findings, edited a supplement to last month’s Bulletin of the American Meteorological Society that summarized results from 20 separate research groups analyzing 16 different events in 2013. They found that while the climate change connection to events like droughts and storms remained unclear, scientifically, “human-caused climate change greatly increased the risk for the extreme heat waves.” The combined research shows that long heat waves are as much as 10 times more likely due to human-induced climate change.

Hoerling said that the authors of this latest Chinese study may even be taking a slightly conservative approach to “some of the more severe consequences that ongoing warming would have if you pushed this out a little bit into the second half of the 21st century.”

The 2013 heat wave in China, he said, would be a “cold summer for those living in the latter half of the 21st century in this area if we continue on our pathway of emissions.”

Environment Canada, a government department, declined to make their lead researcher for the study, Zhang Xuebin, available for interview, and did not respond to written questions—a practice that appears consistent with widely reported policies that bar government researchers, including climate scientists, from discussing their work with journalists. A survey last year of 4000 Canadian researchers revealed widespread “muzzling” of federal scientists.