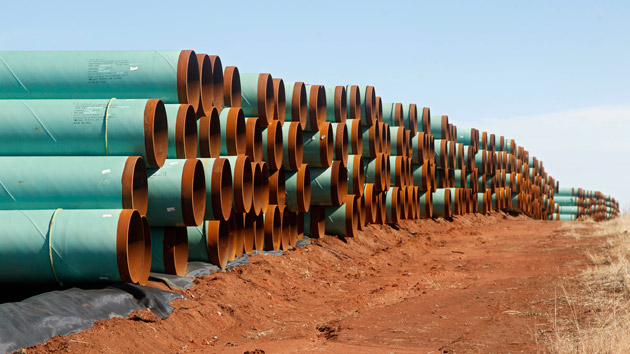 TransCanada Corp., the company seeking to build the Keystone XL pipeline, has teamed up with the world’s largest public relations firm to promote a proposed alternative pipeline that’s entirely in Canada.

Greenpeace Canada obtained documents that the US public relations firm Edelman drafted for TransCanada that outline a campaign to promote Energy East, the company’s proposed 2,858-mile pipeline that would transport crude oil from the Alberta tar sands to the east coast of Canada. The company filed an application to build the Energy East pipeline last month—a project that has been described as an “oil route around Obama” amid political wrangling over Keystone XL in the United States.

Greenpeace says the documents show a company increasingly concerned about the fate of Keystone XL, which would connect the tar sands with Gulf Coast refineries. TransCanada’s Energy East also faces increasing opposition, as does a proposed pipeline to the west, Enbridge’s Northern Gateway. Enbridge got approval from the Canadian government to build Northern Gateway, but work has been delayed, in large part because of opposition from First Nation communities along the pipeline route.

“TransCanada has been saying, ‘If you don’t let us build Keystone, we will build to the east,'” said Keith Stewart, the climate and energy campaign coordinator for Greenpeace Canada. “These documents show that they’re clearly worried about the Energy East pipeline as well. It’s going to face just as rough a ride as Keystone or Northern Gateway.”

The Energy East documents outline plans to create a “grassroots” advocacy campaign on behalf of TransCanada, recruit outside voices backing the company, and investigate environmental groups seen as threats to the project.

Stewart said the documents show Edelman and TransCanada “systematically organizing what we’d call a dirty tricks campaign” typical in the US, but not in Canada. “We’re nice, we don’t do things like that,” Stewart said.

A campaign organization document, dated Aug. 5, details what it calls a “Promote, Respond, Pressure approach” to “respond to allegations and protect the company.” The plan includes typical public relations work, such as promoting the “positive message” on the project and responding to “unfavorable coverage, charges, or negative attacks.” It also includes a plan to “work with third parties” to pressure opponents (emphasis theirs):

Add layers of difficulty for our opponents, distracting them from their mission and causing them to redirect their resources. We cannot allow our opponents to have a free pass. They will use any piece of information they can find to attack TransCanada and this project—attacks are part of a larger, modern oppositional effort to silence those on the other side…This point should particularly be made in communication to supportive third parties, who can in turn put the pressure on, especially when TransCanada can’t.

Many of the documents appear to be part of a pitch to get TransCanada to hire Edelman for the project, while others are action plans. TransCanada’s Keystone XL pipeline awaits a final decision in the US after years of delays and strong pushback from environmental opponents.

Edelman spokesman Michael Bush declined to respond to questions about the firm’s work for TransCanada. “We do not talk about the work we do for clients,” he said via email.

“While the versions you have are not the latest, we have moved forward with implementing certain components of the strategy,” said Howard. He pointed to the site EnergyEastPipeline.com and a pro-Energy East petition as part of that campaign (both of which are clearly labeled as TransCanada-sponsored).

“We have been working with Edelman for several months now and appreciate the support they have provided in helping us better engage in the public conversation, both in Quebec and the rest of Canada,” said Howard. “Edelman was chosen because of their presence in Quebec and their ability to understand the culture. This is an important component for TransCanada’s communications outreach as we move forward with this project.”

Howard said the company has not implemented all of the recommendations in the documents, but is “focused on the pieces that support a coordinated and organized communications program to ensure communities, landowners, First Nations and all Canadians have the facts to make an informed decision about Energy East.”

This type of campaign work is not new for Edelman. A “Grassroots Advocacy Vision Document” dated May 15, 2014, describes Edelman’s previous work on “mobilization” for energy interests. It includes the “Energy Citizens” campaign that Edelman ran on behalf of the American Petroleum Institute—a campaign designed to look like it came from ordinary citizens, but was in fact run by oil lobbyists.

“Companies like ExxonMobil, Chevron, Shell, and Haliburton (and many more) have all made key investments in building permanent advocacy assets and programs to support their lobbying, outreach, and policy efforts,” Edelman wrote. “In launching a program like this, TransCanada will be in good company with a strong roadmap to follow.”

In a document focusing on its plan for the province of Quebec, Edelman outlines identifying and recruiting “third-party voices” that can help “build an echo chamber of aligned voices.” That document notes that Edelman’s general manager for digital public affairs, Mike Krempasky, would serve as the senior counsel for the TransCanada work. Krempasky, co-founder of the conservative blog Red State, was also involved in a previous Edelman campaign that enlisted bloggers to promote WalMart without disclosing that the company was paying them.

Edelman faced pushback earlier this year after The Guardian and Motherboard published stories pointing out that the company had done work for interests that deny climate change. In a blog post responding to those stories, CEO Richard Edelman wrote, “We do not work with astroturf groups and we have never created a website for a client with the intent to deny climate change.”

While the TransCanada documents predate Edelman’s August blog post, they include descriptions of work that some may consider “astroturf” work. “If astroturf is using artificial grassroots to support a corporate agenda, this is clearly it,” said Kert Davies, executive director of the Climate Investigations Center, which has been investigating the role of public relations firms in energy and climate campaigns.

Davies said the documents aren’t that surprising, but it’s not often you see the “full battle plan” for an industry PR effort. “This is a small window into the type of campaigns that oil companies and the American Petroleum Institute have been running for many years to try to affect the political arena.”