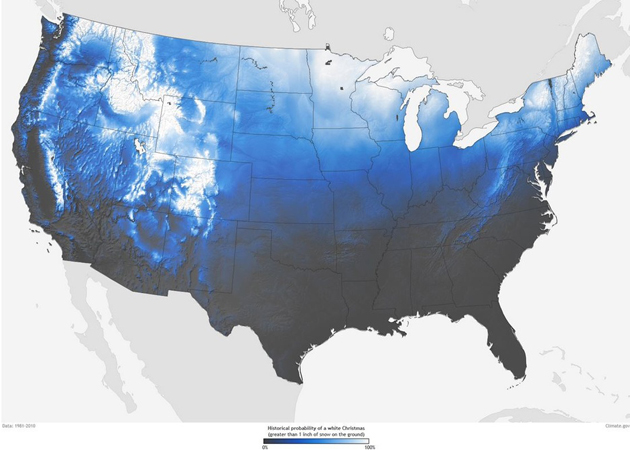 The lighter the shade of blue, the higher the chance of a White Christmas. NOAA/NCDC

This story originally appeared in CityLab and is published here as part of the Climate Desk collaboration.

Those determined to have a White Christmas should grab crampons and a bottle of scotch and prepare for a tough slog. Many places in the lower 48 with a lock on holiday snow are located in rugged, altitudinous climes—the bony ridge of the Sierra Nevada, for instance, and the wind-burned peaks of the Rockies.

That much is clear in this delightful NOAA map plotting probabilities across the US for a White Christmas, defined here as a December 25 with more than an inch of snow on the ground. Based on three decades of climate normals from the National Climatic Data Center, the graphic shows a stark geographic divide when it comes to unwrapping presents in snow-globe conditions: A region of zero to 10 percent probability curves from Washington State through coastal California and then explodes in the deep South and Southeast. Parts of the Midwest also are likely to be snowless, with places like Kansas, Missouri, and lower Illinois having only an 11 to 25 percent chance of a White Christmas.

New York, Baltimore, and Washington, D.C., have piddling shots at this charming weather, though their brethren higher on the East Coast fare better: Boston and Providence each have a 41 to 50 percent chance. Chicago racks a (considering its frosty reputation) low-sounding 41 to 50 percent chance, and Buffalo, home to sudden crashing currents of lake-effect snow, takes it up to 51 to 60 percent.

Aside from the West’s mountain ranges, NOAA says the best-performing powder points for December 25 are Maine, upstate New York, Minnesota, the highlands of West Virginia and Pennsylvania, and almost “anywhere in Idaho.” But even these crystal-crusted locales could shake off the holiday snow this year, the agency says: “While the map shows the climatological probability that a snow depth of at least one inch will be observed on December 25, the actual conditions this year may vary widely from these probabilities because the weather patterns present will determine the snow on the ground or snowfall on Christmas day.”

Here’s another version of the map that’s less smooth, but clearer at delineating regional probabilities: 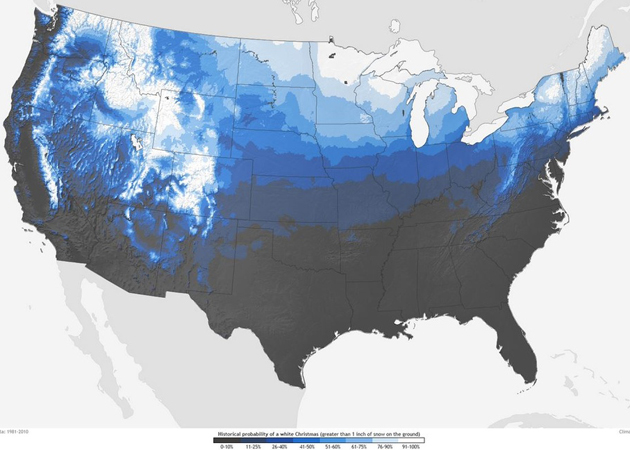