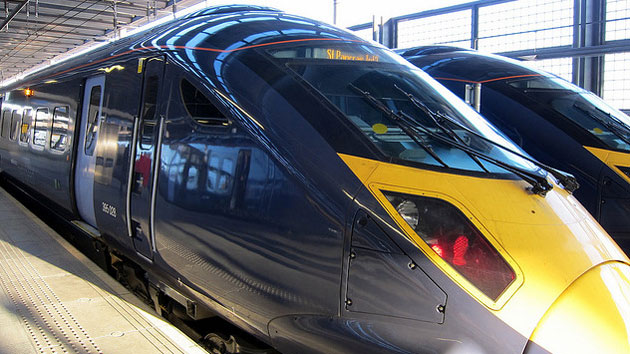 Construction work began in California on Tuesday for the nation’s first truly high-speed rail project, which will eventually connect San Francisco and Los Angeles. The promised travel time between the two cities is just three hours with top speeds up to 220 mph. (The current trip by Amtrak is 12 to 15 hours, not counting frequent delays.) This is the moment environmental advocates have been waiting for, right? Not so fast.

High-speed rail would have been great if it had been built back in the late 1970s, when then-California Gov. Jerry Brown first proposed it. On Monday, during his fourth inauguration ceremony, the modern Gov. Jerry Brown relished the moment as he announced bold new climate targets for California.

But there’s a huge catch. The $68 billion project is already running behind schedule and won’t be completed until at least 2028. The Los Angeles Times reports that there are still significant political and financial hurdles ahead: The system isn’t fully funded yet, some parcels of land within the right-of-way haven’t been acquired, and a deal with freight railroads hasn’t been worked out yet. There’s a very real risk the rail line won’t be completed at all.

Meanwhile, the world has only a few short decades to tackle blossoming carbon emissions in time to keep global warming under so-called safe levels, defined as a rise of no more than 2 degrees Celsius. On the world’s current carbon emissions trajectory, we’ll use up our total carbon budget by 2042. Amtrak’s true high-speed rail line in the Northeast corridor, promising three-hour transits between Washington, D.C., and Boston (down from seven hours currently on the Acela), isn’t slated for completion until 2040. Time is not on our side.

Given the incredible pressure that global warming is inflicting, we can’t waste precious resources on high-speed rail. It’s impractical to hope that truly high-speed rail—the kind that will compete with air travel—will arrive in time to do much good.

Instead, limited public transportation funds should be prioritized for climate-friendly projects that will pay off more than high-speed rail in the same time frame. Some options for politicians: 1) Expand the use of upscale electric buses, 2) support self-driving vehicle technology, and 3) regulate airline emissions.

Borrowing from Donald Rumsfeld, you go to war with the transportation system you have, not the transportation system you might want. In the United States, that means we’re committed to highways and airports for the time being. In 2012, Americans traveled nearly 3 trillion passenger-miles by car, 580 billion by air, and more than 300 billion by bus. Passenger rail was barely even comparable—just 7 billion passenger-miles.

That $68 billion California plans to spend on its high-speed rail system could buy 82,000 state-of-the-art electric buses, 55 times Greyhound’s entire nationwide fleet. And they could start operating immediately. Dedicated bus lanes and congestion pricing have done wonders for reducing commute-hell in many cities, like London. There are ways to make intercity bus travel more appealing, too, as evidenced by the expansion of carriers like wifi-enabled MegaBus in recent years. Similar “curbside” buses are the fastest growing mode of intercity transport and are the most carbon-friendly way to travel medium to long distances in the United States.

Self-driving cars would also do wonders for the climate if they can fulfill their promise to virtually eliminate traffic. A recent Columbia University study showed that replacing New York City’s fleet of taxis with an optimized swarm of self-driving cars would reduce operating costs (and presumably fuel use) by more than 80 percent. Plus, you’d have to wait only seconds to catch one. Of course, there are significant technical, cultural, and legal hurdles before this vision becomes a reality—but the potential is truly immense.

Short-haul flights, those 400 miles or less, are the single most carbon-intensive activity most of us ever do. The proportion of domestic flights that are short-haul (and thus could hypothetically be replaced with rail or bus travel) has been declining in recent years, thanks in part to a rise in video conferencing and frustration with security procedures. But total miles flown on airlines are still increasing in the United States and booming internationally. High-speed rail would do precious little to slow that growth any time soon. The Environmental Protection Agency is expected to issue new rules pertaining to air travel by 2016. Since planes frequently fly overseas, the EPA is likely to coordinate its rules with the United Nations, which could result in the first-ever emissions standards for newly built aircraft.

When President Obama announced federal funding for a national high-speed rail system five years ago, I admit I was caught up in the glamor of the new maps and the promise of finally catching up to existing high-speed rail systems in Europe and Japan (not to mention planned systems in Mexico and in China, especially one connecting Moscow and Beijing). But I’ve come to my senses. High-speed rail will eventually be useful in America—just not quite yet. Besides, it would probably be better to wait for maglev costs to come down or for something like Elon Musk’s hyperloop technology, anyway.

As sexy as high-speed rail is, it’s probably better to just focus on improving the transportation systems we already have, rather than creating a whole new one from scratch.