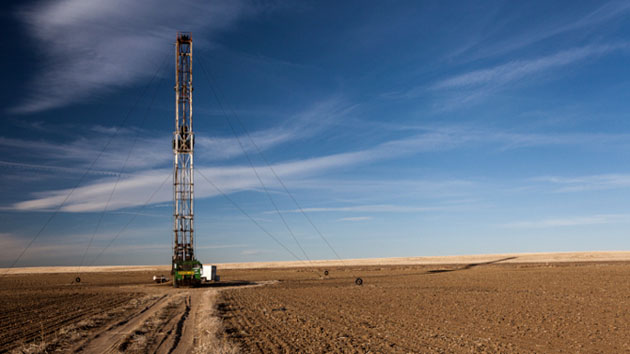 
This story originally appeared in the Guardian and is republished here as part of the Climate Desk collaboration.

President Barack Obama will unveil a new plan to cut methane from America’s booming oil and gas industry ahead of the State of the Union address, in an attempt to cement his climate legacy during his remaining two years in the White House.

The new methane rules—expected ahead of the State of the Union speech next week—are the last big chance for Obama to fight climate change, campaigners said.

“It is the largest opportunity to deal with climate pollution that this administration has not already seized,” said David Doniger, director of the climate and clean air program at the Natural Resources Defense Council.

Methane is the second biggest driver of climate change, after carbon dioxide. On a 20-year timescale, it is 87 times more powerful as a greenhouse gas.

US officials acknowledge that Obama will have to cut methane if he is to make good on his promise to cut US greenhouse gas emissions 17 percent from 2005 levels by 2020, and by 26 percent to 28 percent by 2025.

“It is the largest thing left, and it’s the most cost-effective thing they can do that they haven’t done already, and all the signs are there that they intend to step forward on that,” Doniger said.

The Environmental Protection Agency is expected to roll out a combination of regulations and voluntary guidelines for the oil and gas industry, people familiar with the plan said.

The rules represent Obama’s first big climate push on the oil and gas sector, after moving to cut emissions from power plants and, during his first term, cars and trucks.

But the clock is ticking. Any new EPA regulations would have to be finalized by the end of 2016—and Republicans in Congress and industry lobby groups are already mobilizing to oppose the standards.

Methane accounts for about 9 percent of greenhouse gas emissions, according to the EPA. The biggest share of this by far comes from the oil and gas industry, which has exploded over the last decade.

Most of those greenhouse gas emissions are from leaky equipment—faulty casing on newly fracked wells, but also millions of miles of pipelines and aging infrastructure.

The EPA had originally promised to announce a new methane plan by the end of last year.

The agency administrator, Gina McCarthy, indicated that the agency would combine regulations with voluntary guidelines for industry.

Unlike the power plant rules, which left industry a fair amount of latitude in cutting emissions, the methane standards are believed to be tightly focused on plugging leaks.

The new rules could directly target leaking valves and other equipment that allow methane to escape from wells, pipelines and other infrastructure.

The new rules could also be backed up with voluntary guidelines for other types of air pollutants that would also lower methane emissions.

“If you take steps to reduce volatile organic compounds, those steps would automatically have the secondary benefit of reducing methane emissions,” said Sandra Snyder, an environmental attorney at the Bracewell Giuliani law firm.