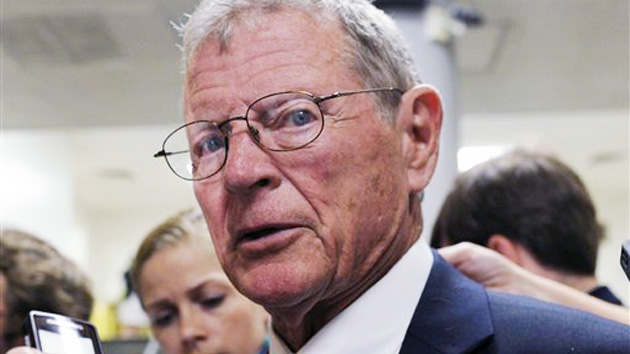 Let it be recorded for history that late in the afternoon of January 21, 2015, the United States Senate formally acknowledged that climate change is real.

As to that other critical question of whether human beings are contributing to it? Well, the Senate is not so sure. In a series of largely symbolic votes Wednesday afternoon, newly-disempowered Democrats tried to force Republicans to stake out a firm position on climate change after years of party leaders trying to dodge the question by saying they’re “not scientists.”

The result was a split decision: The Senate overwhelmingly voted, 98-1, in favor of an amendment stating that “climate change is real and not a hoax.” In an amusing twist, the chamber’s most notorious climate denier, Senator Jim Inhofe of Oklahoma, signed on to the amendment at the last minute, mostly because it didn’t attribute a cause to global warming. “The climate is changing. The climate has always changed,” Inhofe said. He then criticized supporters of man-caused climate change by saying that the real “hoax” was “that there are some people that are so arrogant to think” that they can change the climate. (The only senator to oppose that statement was Roger Wicker, a conservative from Mississippi.)

So why all the votes on climate change? In short, Democrats were trying to take advantage of a pledge by the new Senate majority leader, Mitch McConnell, to open up the floor to amendments after years in which Republicans complained that Harry Reid shut down debate, and shut down the minority party. The Senate is now debating legislation to approve the Keystone XL pipeline, which critics worry would increase carbon pollution. The amendments would not have substantively changed the bill or any other aspect of federal policy—they merely stated what “the sense of the Senate” was on the topic.

Politically, Democrats wanted to shame Republicans who won’t go on record supporting what a vast majority of experts say is scientific reality. But from a legislative standpoint, they wanted a baseline vote to see just how far they needed to go to persuade the GOP to support federal policies—a carbon tax, for example—aimed at reversing climate change. While Senator Bernie Sanders said the mere acknowledgement of climate change was “a significant step,” it’s clear Democrats have a long way to go.