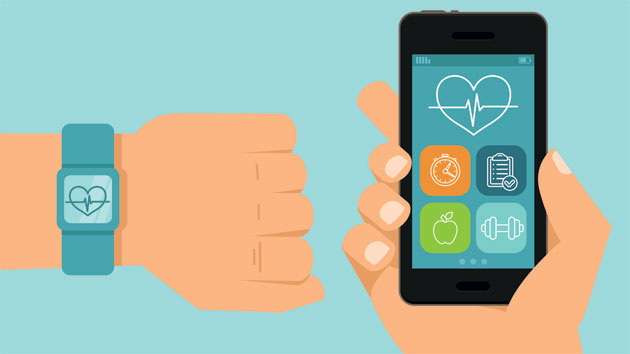 Recently, bands in assorted colors began appearing on the wrists of everyone from young athletes to old lawyers. FitBits, FueldBands, and other wearable fitness trackers promised to enhance the health of the wearer by accurately monitoring every step, calorie, and sleep pattern. But, according to a new study published Tuesday in the Journal of the American Medical Association (JAMA), the apps on your smartphone do the job just as well, or even better—at least in terms of measuring your steps and your calories.

“There is strong evidence that higher levels of physical activity are associated with weight loss,” says Mitesh Patel, the study’s senior author and an assistant professor of medicine and health care management at the University of Pennsylvania. “For most adults that want to track their general activity, smartphones will meet their needs.”

Penn researchers compared 10 of the top-selling smartphone fitness applications and pedometers with wearable devices, tracking 14 healthy adults as they walked on the treadmill.

According to the results, the smartphones were just as accurate and consistent as wearable devices. Wearable devices had as much as a 22 percent variation in the range of step counts compared to the observed number of steps taken. There was only a 6 percent difference in the range of the step counts from smartphones in comparison to observable steps. The number of steps is important to accurately estimate the number of calories burned, which the apps and devices track by detecting the shifting position of your body.

If smartphones are just as accurate, why spend $100 or more on a fancy tracker bracelet?

“Smartphones may be harder to carry with more vigorous activity such as running or biking, and that might be one reason an individual chooses to use a wearable device,” explains Patel, pointing to an obvious objection for people who might reject smartphones as fitness trackers.

But fitness trackers still might not be the right choice for heavy exercisers. According to Live Science, a site that tracks scientific news, when fitness trackers first came out, workout enthusiasts were disappointed in the basic functions like step counters. “A lot of [people] stopped using fitness trackers altogether because it wasn’t telling much more then they already knew,” Wes Henderek, a market researcher at NPD Group told Live Science. JAMA also reported that only about 1 to 2 percent of adults own wearable devices, and one-third completely stop using the devices after only six months.

More than 65 percent of American adults own smartphones and generally carry them throughout the day. For those hoping to get a handle on how active they were during the day, smartphone applications that track food consumption, activity, sleep, and other health factors may be more convenient and less expensive.

“While smartphones and wearable devices can help track health behaviors, they may not alone drive behavior change,” says Patel. The key, he says, is to figure out how to engage individuals so they use technology to lead them to changing unhealthy behavior, especially those that most in need of making the change.