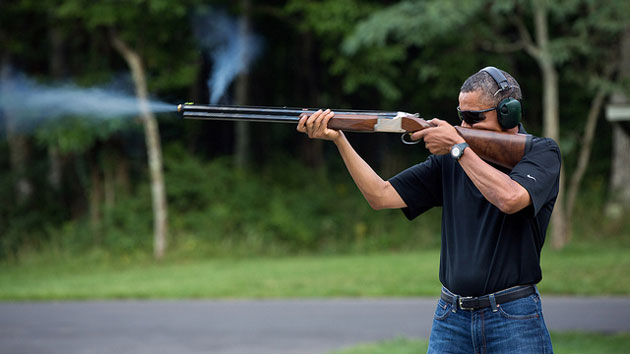 No animals were harmed in the making of this photograph. <a href="https://www.flickr.com/photos/whitehouse/8436110735/">White House</a>

No, not the list of suspected terrorists targeted for extrajudicial killing—the Department of Agriculture’s tally of every animal it killed or euthanized over the last fiscal year. All 2,713,570 of them, from 319 different species.

The culling, conducted by the agency’s Wildlife Services division, is controversial. That’s because—much like the actual kill list—the USDA’s operations are shrouded in secrecy, prone to collateral damage, and symptomatic of an approach that often uses force as something other than a last resort. (A 2012 Sacramento Bee series explored the problems with the USDA’s methods in detail.) One of the problems with culling wildlife is that once you’ve gotten into the business of killing some animals to save other animals, it’s awfully hard to get out of it.

The contradictions can be glaring. To wit, the USDA killed cats (730) to save rats, but if you’re scoring at home, it also killed 1,327 black rats, 353 Norway rats, 74 Hutia rats, 7 Polynesian rats, 4 bushy-tailed woodrats, and 3 kangaroo rats. It slaughtered more than 16,500 double-breasted cormorants to save salmon. It’s shooting white-tailed deer (5,321) to save various plant species and the small fauna, like rabbits, that eat them. But the woods aren’t safe for Thumper either—the agency bagged 7,113 cottontail rabbits, plus assorted varieties of jackrabbits, swamp rabbits, and feral pet rabbits. The USDA killed 322 wolves and 61,702 coyotes to save livestock, perhaps in an attempt to atone for the 16 unspecified livestock it killed by accident.

Mostly, the federal government is killing starlings. Wildlife Services used a toxicant called DRC-1339 to ice 1,140,331 invasive European starlings in the 2014 fiscal year, in the name of protecting feedlots, dairy farms, poultry interests, and public health. Because starlings roam in enormous flocks (known as “murmurations”), they also tend to produce extreme quantities of excrement in urban areas, putting humans at risk of salmonella or the respiratory infection histoplasmosis. They eat cherry blossoms. Occasionally, they short-circuit power substations. Starlings are bastards. (But don’t blame them—blame Eugene Schieffelin, the druggist who set the birds loose in New York City’s Central Park in 1890 in an attempt to populate the continent with every species of bird that existed in Shakespeare’s London.)

The USDA’s final tally is striking. But it also represents the lowest total since Obama took office. In fiscal year 2013, Wildlife Services killed 4,378,456 animals, including more than 2 million starlings.