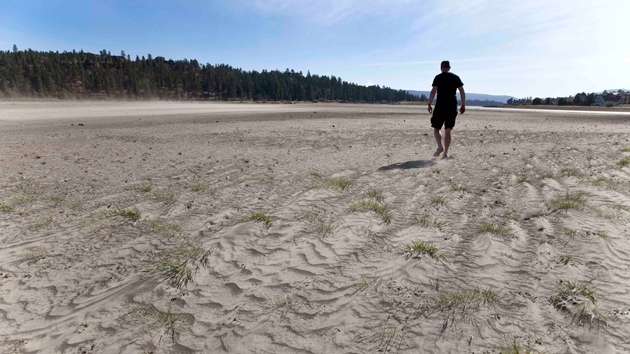 Update: On Friday, June 12, California’s State Water Resources Control Board ordered about 100 senior water rights holders—those whose rights date back to 1903 or later—to stop drawing from local rivers and streams. This is the first time since the drought of 1976 that the state has regulated farmers whose water rights date from before 1914. Farmers who don’t comply with the new cuts face fines of as much as $1,000 a day and $2,500 per acre-foot of water.

As California endures its fourth year of grueling drought, officials are getting more serious about mandatory water cuts. Gov. Jerry Brown imposed the state’s first-ever water restrictions last month, ordering cities and towns to cut water by 25 percent. But the vast majority of water in California goes not to homes and businesses but to farms, which so far have suffered minimal cuts.

On Friday, the state’s Water Board approved a deal with farmers in the Sacramento-San Joaquin River Delta in which some farmers will voluntarily reduce water use by 25 percent in exchange for assurances that they won’t suffer reductions later in the growing season. “We’re in a drought unprecedented in our times,” said Board Chair Felicia Marcus on Friday. “The action we’re announcing today is definitely unusual, but we are in unusual times.”

Here’s a primer on how farms are using water now, who holds rights to it, and what restrictions may come next.

What are water rights? Water rights enable individuals, city water agencies, irrigation districts, and corporations to divert water directly from rivers or streams for free. The rights are based on a very old seniority system: “Senior” water rights holders are the first to get water and the last to suffer from cuts. There are two primary types of these senior holders: Those who started using the water before 1914 (when the water permit system was put in place), and “riparians,” who own property directly adjacent to streams or rivers. Water rights often, but don’t always, transfer with property sales.

Who are senior water rights holders? Senior water rights holders are the corporations, individuals, or entities who either staked out the water before 1914, when the state started requiring permits and applications for water; those who live directly adjacent to a river or stream; or those who have bought property with senior water rights. This system made sense in the era of pioneers settling the Wild West: As the Associated Press recently put it, “Establishing an early right to California water was as simple as going ahead and diverting it. Paperwork came later. San Francisco got the Sierra Nevada water that turned its sand dunes into lush gardens by tacking a handwritten notice to a tree in 1902.” Today, there are thousands of senior water rights holders; most of them are corporations, many of which are farms. The holders include utilities company Pacific Gas and Electric, the San Francisco water agency, a number of rural irrigation districts, and Star Trek actor and rancher William Shatner.

What water cuts were announced Friday, and what’s coming next? The Water Board announced that it would accept a voluntary deal in which riparians in the 6,000-acre Sacramento-San Joaquin Delta (shown in the map below) would reduce their water use by 25 percent, or fallow 25 percent of their land. In exchange, the Water Board promised them that they wouldn’t suffer cuts in the coming year. There are about 1,000 water holders in the area who could be candidates for the deal, which will be enforced by a combination of a complaint system, satellite imagery, and spot checks.

In addition, the Board will announce mandatory curtailments to other senior water holders next week for the first time since the 1970s. The Board is still figuring out the location and percentage of these cuts. 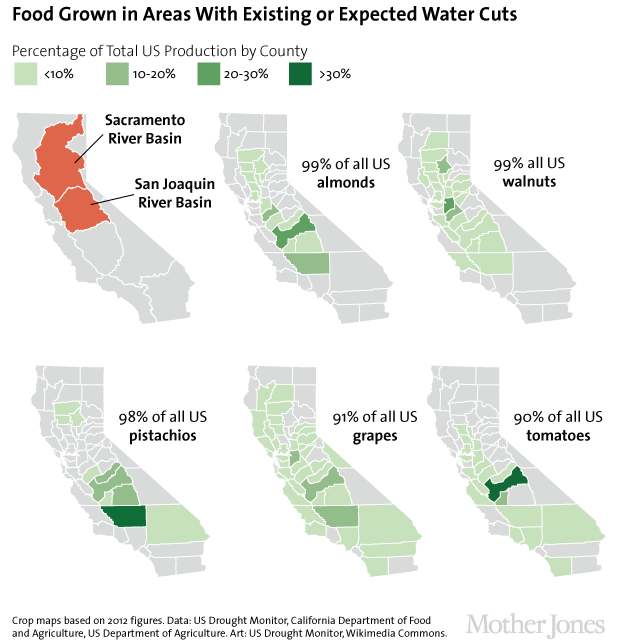 So before Friday’s cuts, farmers were just using as much water as they wanted? Well, not exactly. Farmers with “junior” (post-1914) rights in the San Joaquin and Sacramento River basins, home of the normally fertile Central Valley, were ordered to stop using the river’s water a month ago. But the regulations are enforced by the honor system and reported complaints; so far, only a fifth of junior water holders in the area have confirmed that they are complying.

The Department of Water Resources has also made substantial cuts to the state’s two major water projects—a system of aqueducts, dams, and canals across the state that distributes water from water-rich Northern California to the water-poor Central Valley. Growers who use water from the Central Valley Water Project are only receiving 20 percent of their allocated water, and farmers of the State Water Project aren’t receiving any at all.

All of this has led more and more farmers to rely almost exclusively on groundwater, but it’s undeniable that the drought has led to less farming overall: Last year, five percent of irrigated cropland went out of production, and officials expect that number to rise this year.

What is groundwater, and how much of it are farmers using? Groundwater is the water that trickles down through the earth’s surface over the centuries, collecting in large underwater aquifers. It’s a savings account of sorts—good to have when it’s dry but difficult to refill—and it wasn’t regulated until last year, when Gov. Brown ordered local water agencies to come up with management plans. The water agencies are still in the process of implementing those plans, and in the meantime, no one knows exactly how much groundwater is being used. We do know this: Groundwater usually makes up about 40 percent of the state’s total freshwater usage, but lately, the state has been running on it. It made up 65 percent of freshwater use last year, and may make up as much as 75 percent this year. As a result of overpumping, the land is sinking—as much as a foot a year in some areas—and officials are worried that the changing landscape threatens the structural integrity of infrastructure like bridges, roads and train tracks.