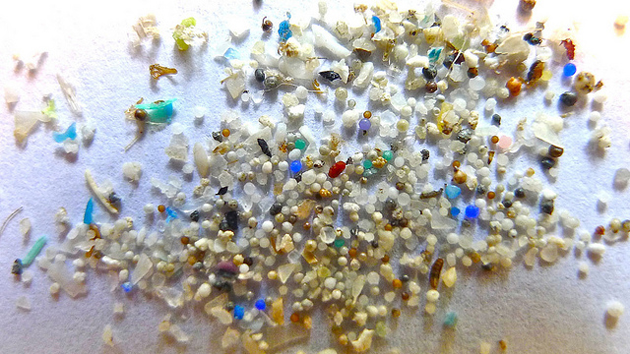 These microbeads, less than one millimeter wide, were found in face scrubs.5 Gyres Institute

California is the latest state to consider banning products with microbeads, the tiny pieces of plastic, often less than a millimeter wide, that have become a popular addition to cosmetics and personal care products. Usually made of polyethylene, microbeads primarily serve as exfoliants in face washes and body scrubs, but also add color and texture to toothpastes, lip balms, moisturizing creams, and makeup. A single tube of face wash can contain more than 300,000 of the plastic beads, which are cheaper than other common natural exfoliants like apricot seeds, coconut husks, or diatomaceous earth. Here’s a primer on which products contain microbeads and why consumers and politicians are concerned about them.

What’s the environmental impact of microbeads?
Microbeads are so small that they aren’t caught by most water treatment plants, so they wind up in lakes, streams, and oceans. According to a report by New York’s attorney general, as many as 19 tons of microbeads could be discharged into the state’s waterways each year. Assuming all Americans are dumping microbeads at that rate, 300 tons per year end up in US waterways.

The beads, which can resemble fish eggs, are mistaken for food and ingested by fish and other marine animals. The plastic also acts as a sponge for toxins, soaking up pesticides, phthalates, and heavy metals and carrying them through the food chain. Tuna and swordfish are turning up with microbeads in their stomachs.

What’s the health impact of microbeads?
The movement to ban microbeads has really gathered steam because of concerns about their effects on human health. In March 2014, dental hygienist and blogger Trish Walraven sounded the alarm with an article about how she was finding “bits of blue plastic in my patients’ mouths every single day.” The plastic, she wrote, came from Crest toothpaste, and it was getting stuck in patients’ gums. Now, dentists are concerned that the microbeads trap bacteria, possibly causing gingivitis. Procter and Gamble, which makes the toothpaste, insists that microbeads are safe, but has pledged to rid Crest products of plastic microbeads by next March.

There are other concerns about ingesting microbeads—both from using products like toothpaste and from eating fish containing the plastic bits. The Environmental Working Group notes that the plastics that make up some microbeads are suspected to be hormone disruptors, so “eating them at your fish fry would not only lend an unpleasant texture to your beer-battered fish but could also add an unhealthy dose of estrogen-mimicking chemicals.”

How do I tell if my products contain microbeads?
Look for polyethylene on the list of ingredients; this is the most common type of microbead. (Note: Polyethylene isn’t the same as polyethylene glycol.) Other ingredients to watch out for: polypropylene, poly-e-terephthalate, and polymethyl methacrylate. Below are a few products that are microbead-free. The advocacy organization Beat the Microbead has more extensive product lists.

What are cosmetics companies doing?
Facing consumer pressure, several large cosmetics manufacturers have either already removed microbeads from their products or have pledged to phase them out. Johnson & Johnson, which makes Neutrogena, and L’Oréal, which owns Garnier, have pledged to remove the beads by 2017. Unilever phased polyethylene microbeads out of its products, including Dove and Axe soaps, earlier this year.

What are states doing?
Last year, Illinois became the first state to crack down on the sale of products with nonbiodegradable microbeads: They will be phased out starting in 2017 and completely banned by 2019. Since then, Colorado, Maine, and New Jersey have passed similar laws, and California, Michigan, Minnesota, Oregon, Wisconsin, and Washington have bills on the table. But environmentalists say that most of these measures aren’t going far enough, as they leave loopholes for biodegradable plastics. So far, there are no plastics that consistently break down in a marine environment.

Last week, the California state assembly approved the most stringent bill so far. It would prohibit both synthetic and biodegradable microbeads. If the bill becomes law, it may force manufacturers to change their entire product lines to avoid the cost of making microbead-free products just for the California market.