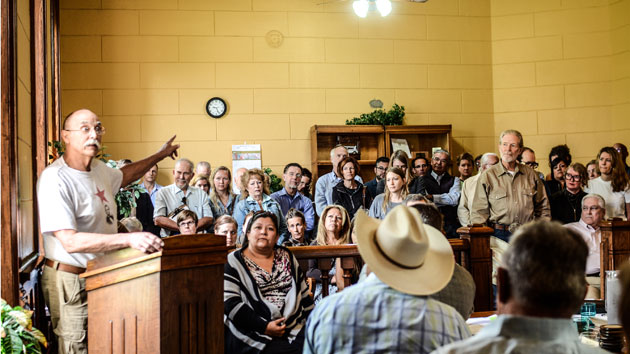 A lone pipeline supporter speaks to local officials and citizens at a County Commissioners meeting in Marfa, Texas, on Tuesday.<a href="http://jessicalutz.com/">Jessica Lutz</a>

Earlier this year a couple of billionaires landed a nearly $770 million contract to run a 143-mile-long natural gas pipeline through Texas’s pristine Big Bend region. As of May 11, rail shipments of pipe had begun to arrive in Big Bend’s Fort Stockton area. This recent progress on the pipeline project is fueling pushback from locals who’ve been concerned about this project since it was announced in November 2014. Big Bend is one of Texas’ last unspoiled wilderness areas and one of few remaining holdouts in a state riddled with energy transmission pipelines and large-scale oil and gas activity. Fearing potential land grabs, increased traffic, and environmental desecration, locals have been mobilizing through town hall meetings and launching activist campaigns to oppose it.

What is the Trans-Pecos pipeline? At 42 inches wide and under 1,400 pounds of pressure per square inch, the Trans-Pecos pipeline will carry as much as 1.4 billion cubic feet of natural gas a day after its projected completion in early 2017. The gas will originate in Texas’s Permian Basin, travel the length of the pipeline to the border at Presidio, Texas, and Ojinaga, Mexico, where it will be piped further into Mexico for industrial use and power generation. The project was commissioned by the Mexican Federal Electricity Commission (CFE) as part of the country’s push to modernize its energy systems.

A consortium that includes two energy companies, Mexico-based Carso and Texas-based Energy Transfer Partners, won the contract to construct the pipeline in January. Carso is owned by Carlos Slim, the world’s second-richest man, who made his original fortune by charging Mexico’s phone customers monopoly prices, while levying some of the highest fees disproportionately on the poor.

ETP is led by Republican megadonor and multibillionaire Kelcy Warren of Dallas. In February, the company brought on former Texas Gov. Rick Perry to the company’s Board of Directors to offer “strategic guidance to ETP’s executive management team,” according to a spokeswoman for the company. Even before that, Perry and Warren had ties: Perry has received at least $250,000 in campaign donations from Warren since 2011. ETP is also currently embroiled in a separate controversial pipeline project to transport crude from the Bakken oil fields of North Dakota to Illinois. The company is also facing claims that a representative from a subsidiary offered the services of a teenage prostitute to a landowner in exchange for letting ETP run the crude oil pipeline through his property. “We take these types of matters very seriously and are investigating further,” an ETP spokeswoman told KCRG of the claims.

What’s controversial about this project? ETP is running construction of the pipeline on the US side of the border, and Big Bend locals are frustrated with what they’re calling a lack of transparency from the company. Among their key complaints is confusion from ETP on which agency will provide regulatory oversight for the pipeline. This question hinges on whether the pipeline is designated as “interstate” or “intrastate.” The former means that the pipeline is crossing an international border, which would require a Presidential Permit, triggering more rigorous federal guidelines for the pipeline’s construction and operation. The latter, “intrastate,” would require a T-4 form from the Railroad Commission of Texas, the standard application for a permit to own and operate a pipeline through Texas. 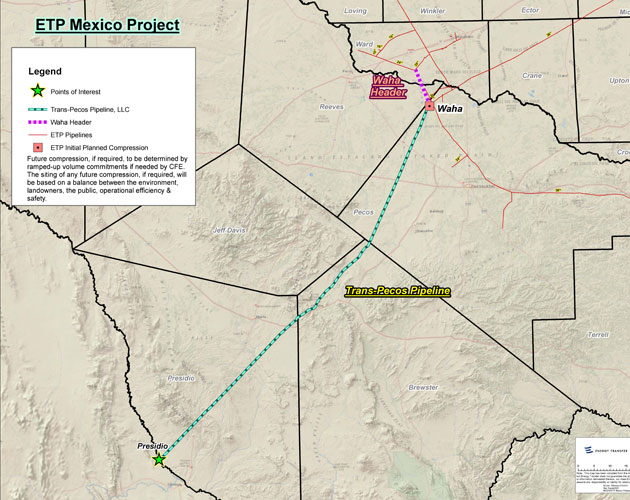 Given current plans to have the gas transported into Mexico, some local activists argue that the pipeline should be designated interstate. But in mid-April, ETP hosted several “open house” meetings for Big Bend locals where they claimed the pipeline would be assigned the intrastate designation, and that the company had already applied for and received a T-4 permit from the Railroad Commission.

But a spokesperson for the Railroad Commission told Big Bend Now that’s not the case:

“The Railroad Commission’s pipeline safety jurisdiction applies only to intrastate pipelines that begin and end in Texas. The Energy Transfer flyer you provided me on this pipeline states the pipeline will terminate with an interconnect with a pipeline near Ojinaga, Chihuahua, Mexico, which means this is an interstate and international pipeline under the pipeline safety authority of the U.S. Department of Transportation Pipeline and Hazardous Materials Safety Administration, and the U.S. Department of State. In short, their flyer is incorrect, and we are contacting the company to make a correction.”

The Railroad Commission did not respond to phone calls or emails from Mother Jones. In a recent email, Vicki Granado, a spokeswoman for Energy Transfer Partners, says that only the small section of pipeline that crosses the international border requires a presidential permit, while the remaining 140-plus miles of pipeline across West Texas would fall exclusively under the Texas Railroad Commission’s authority.

How might this project affect the natural habitats? The Big Bend area is a geologically rich, wide-open expanse of mountains, desert, and ranch land; the nearby UNESCO biosphere reserve Big Bend National Park is home to 1,200 species of plants and scores of mammals, birds, reptiles, and other animal species. While the exact route isn’t yet known, the proposed direction shows the pipeline running through private ranch land, close to Big Bend Ranch State Park, and even closer to the Chinati State Natural Area, an undeveloped swath of land known for its diverse flora and fauna. In Texas, pipeline companies are legally allowed to use eminent domain to seize private land if an agreement isn’t reached with individual landowners. ETP’s Granado says that land condemnation is “always an option of last resort.”

But Big Bend is the kind of place where locals take private property seriously and have a distaste for outside interlopers. As local former justice of the peace and rancher Mary Luedeke told San Antonio Express-News, if “you go to talking about condemning something by eminent domain, you’ll get shot in this part of the country.” Anticipating a potential land grab, some locals have already sought legal counsel from San Angelo lawyer Joe Will Ross, who often handles eminent domain cases. (Citing his clients’ interests, Ross declined to comment for this story.)

More than anything, many locals object to what they see as a potential start to wider oil and gas activity in a region that has, up until now, managed to avoid it. “We don’t want the pipeline to impact the sanctity of this region,” says David Keller of Big Bend Conservation Alliance, which is organizing informational meetings on the pipeline for residents in affected counties. “If you go to Midlands just a couple hours north of here, it’s just an industrial wasteland, a sacrifice zone for the oil and gas industry. We see what that does to other communities,” he says, adding: “[Big Bend] is the last frontier of Texas. Wide-open spaces, beautiful open landscapes, antelope, all that, and we don’t want it to start getting industrialized.”

What’s next for the Trans-Pecos pipeline? Despite mounting opposition, ETP is laying the groundwork for construction, which they’ve announced will begin late this year or early 2016, with hopes of having natural gas flowing by 2017. The company has sent out land surveyors, one of whom was caught trespassing on a ranch; according to Granado, the rail shipments of pipe that began arriving in Big Bend this week will continue to do so through early July.

Correction: This article originally stated that the pipeline would run through public land areas.