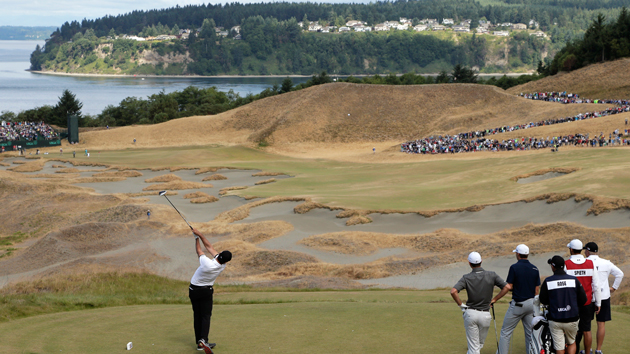 Australian golfer Jason Day tees off at the US Open in Chambers Bay on Friday. Charlie Riedel/AP

This weekend, the world’s most accomplished golfers have gathered at Chambers Bay on Washington state’s Puget Sound for the most challenging golf major of them all—the US Open Championship. The course’s difficulty and Scotland-style “links” layout has been the talk of the golfing world, as have the unique grasses used on the fairways and greens. Indeed, even the most fair-weather of golfing fans will notice the course is much browner than the typical sites for golf championships. Ever-fussy golfers are already complaining, but the landscaping of Chambers Bay is a win for the environment.

I think a championship of the caliber of @usopengolf deserves better quality green surfaces that we have this week but maybe I’m wrong!

According to the Alliance for Water Efficiency, a typical golf course soaks up between 100,000 and one million gallons of water a week; golf courses in California’s Palm Springs use on average 800,000 gallons per day—more water than an Olympic-sized swimming pool. Golf resorts in dry states facing government-mandated water reductions and drought-shaming have begun to find ways to use recycled water and minimize the area they irrigate.

Chambers Bay—located in a region that’s also suffering from drought—aims to change golf courses’ wasteful reputation. The course is irrigated with reclaimed wastewater and fertilized with sewage from a nearby treatment plant. The groundskeepers landscape with native plants and have cleaned up land and marine habitats for local wildlife. Oh, and that brown grass everyone is fussing over? That’s Fescue, a drought resistant grass well-adapted to the relatively cool climate of Western Washington.

Ed Osann, who heads the water efficiency team at the Natural Resources Defense Council, praises efforts like those Chambers Bay have made—especially the fertilizer trick. Taking potable drinking water and spreading it on the ground, he says, simply “doesn’t make sense.”

The 950-acre land mass about 40 miles south of Seattle began as bluffs overlooking the waters of the Puget Sound and the Olympic Mountains before turning into a mine at the turn of the twentieth century, eventually becoming the nation’s largest producer of gravel. By the 1970s, the area’s groundwater became so polluted with waste runoff that the US Environmental Protection Agency required Pierce County to build a wastewater treatment plant to clean up the area. The sewage plant, which opened in 1984, serves 250,000 Pierce county residents to this day. 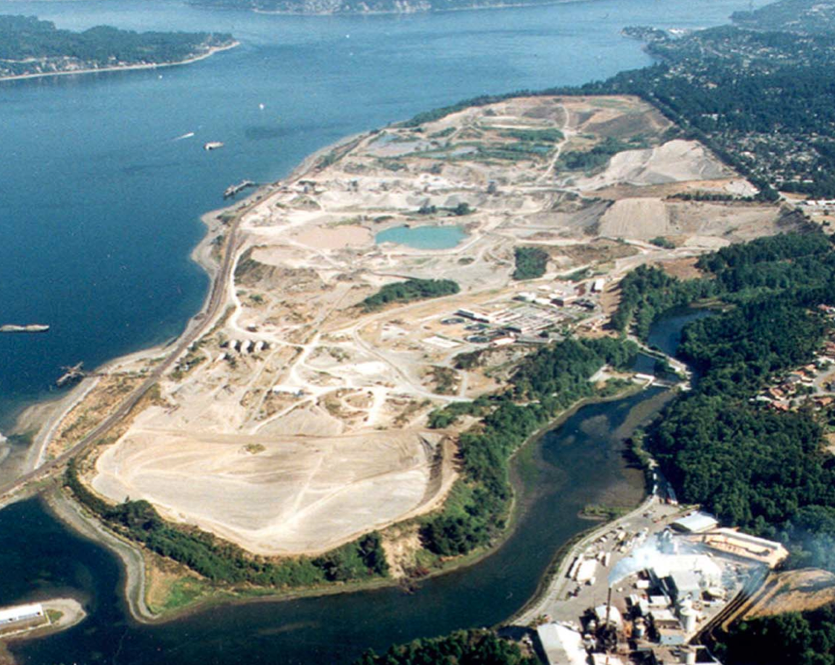 The current site of Chambers Bay golf course used to be a gravel mine. Pierce County Public Works and Utilities

Ten years later, the mine had no more gravel to extract and the owners put the land up for sale. Fearing developers would encroach on their plant, the county decided to buy the remaining 600 acres for $40 million, financed by the taxpayers of Pierce County. In just over a decade, community leaders and citizens turned the barren mine into a public park complete with trails, meadows, picnic areas, a rehabilitated marine shoreline, and, not least, a world class municipal golf course.

In order to minimize the use of chemicals and herbicides on the grounds and landscaping, in 2006 the county began to manufacture its own fertilizer out of biosolids (aka poop) from the wastewater treatment plant. The product, dubbed SoundGRO, has been awarded the highest standard by the EPA.

By next year, the course will not use a single drop of municipal water.

They didn’t stop there. The plant’s gas byproduct is being used to power the treatment plant itself, and the county has begun an effort to irrigate the grounds with reclaimed wastewater that would otherwise flow into the Puget Sound. Using reclaimed wastewater will also minimize the use of potable water from drought-stricken Washington state’s water reserves. By next year, the course will not use a single drop of municipal water.

In an effort to revive the ecosystems destroyed by mining, the park cleaned up leftover industrial waste and restored wildlife habitats. The course has at least two eagles’ nests, as well as hawks, osprey, fox, beaver, coyote, and deer. At the marine shoreline, closed to the public for a century, two creosote docks, used to load barges with sand and gravel from the mine, were taken out, allowing the area’s many different species of salmon to return to Chambers Bay.

These efforts won the course designation as an Audubon International Silver Signature Sanctuary, the golf course equivalent of LEED certification. It was the first in the Pacific Northwest to earn this distinction, and only 20 other golf courses in the world have this certification (15 more are Gold Signature courses).

Osann hopes that other courses will follow Chambers Bay’s lead. After all, he says, “This is an industry that can afford to invest in its future.”