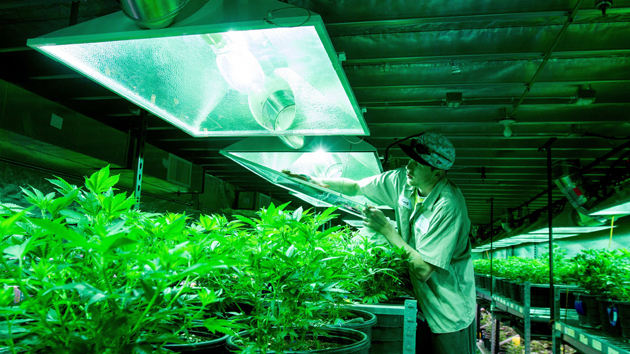 A worker cleans the lights in the vegetative room at Medicine Man in Denver. Kai-Huei Yau/ZUMA

This story was originally published by City Lab and is reproduced here as part of the Climate Desk collaboration.

Since states like California, Washington, and Colorado have adopted laws allowing for the legal growth and sale of marijuana, a new reefer madness has taken shape. In some areas, the bud industry has been credited for performing “economic miracles.” In others, it’s to blame for everything from pollution and deforestation to water shortages. And while it has been touted as a possible gateway to reducing racial arrest disparities, that has not been the case so far in Colorado. 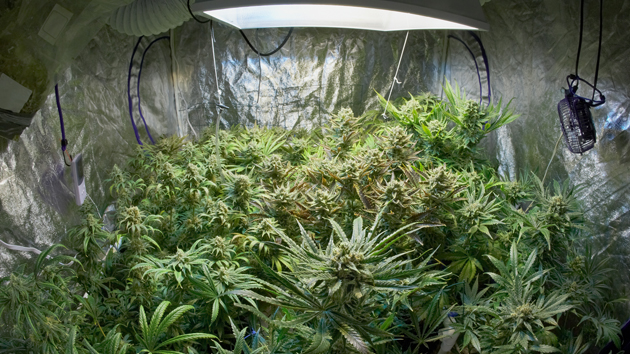 Charge another social problem to the weed game: It’s getting too high on cities’ energy supply. At least that’s the case in Denver, where the recreational marijuana industry is reportedly sucking up more of the city’s electricity than it may have bargained for.

Colorado became the first state to legalize recreational weed use in 2012, and the commercial industry has grown exponentially ever since. But that blooming market has placed a huge burden on the grid that distributes electricity throughout the state, particularly in Denver, where the largest cluster of growing facilities exist. The city’s 354 weed-cultivation facilities sucked up 200 million kilowatts of electricity last year, up from 86 million at 351 facilities in 2012, according to the Denver Post.

That large jump still makes up less than 2 percent of the total electricity Denver consumes right now. But the city’s electricity use has been rising at a rate of 1.2 percent annually, with 45 percent of that increase due to marijuana-growing operations. The city, however, has little energy planning in place to account for what will be continuing effects due to the exploding growth of the pot market. Elizabeth Babcock, Denver’s manager of air, water, and climate told the Denver Post that city officials are not currently considering energy-efficiency rules for the weed industry.

“Indoor marijuana cultivation is highly energy-intensive. Overall, energy costs account for about one-third of the cost of production. With $6 billion in energy costs annually, marijuana cultivation is one of the most energy-intensive of the major industries in the United States. It consumes six-times as much energy as the pharmaceuticals industry and requires eight-times as much energy per square foot as the average US commercial building. It is estimated that marijuana currently consumes at least one percent of all of the nation’s electricity. And in California, which reportedly has the largest marijuana growing industry in the United States, consumption totals three percent of California’s total electricity consumption. The energy consumption is expected to grow exponentially as marijuana becomes legalized throughout the country.”

The volume of heat and light needed for growing quality cannabis plants accounts for much of the energy use. As Berkeley University researchers reported in 2013, lamp lights used for indoor-plant growing are 500 times more intense than standard reading lights and match the intensity of lamps used in hospital operating rooms. Another report found that the electricity used for a small hydroponic unit yielding just five pounds of cannabis crops a year would be the same amount as used by the average US home.

When Colorado’s recreational weed law first passed, Boulder County proposed a number of measures to push growers toward using renewable energy—important given the state’s plans to comply with EPA’s Clean Power Plan. The county originally told commercial and medical weed growers that they had until October 22, 2014, to find a way to offset at least 51 percent of their power consumption with on-site renewable energy generation, with the expectation for them to make all energy use renewable by this October.

That plan was reconsidered, though, when everyone realized there wasn’t enough renewable energy supply in the state to absorb the impact of the pot industry’s usage. So, the county created another compliance method: a fee of 2.16 cents per kilowatt hour, which is used for the Boulder County Energy Impact Offset Fund, which is set up to offset fossil fuel consumption. Problems still remain, though, both in terms of energy use and climate change implications. As Warren noted in her report:

“Connecting to the existing national energy delivery system and utilizing energy efficiency programs and innovation are great opportunities to lessen some of marijuana’s carbon footprint, but it will do little to offset the millions of metric tons of carbon dioxide that the industry has emitted and will continue to emit.”

Which is why Warren implores that, as more cities and states legalize pot, expanding the market in the process, that electricity use is regulated upfront with indoor growers urged to rely on renewable energy sources. As it is, weed-business owners doesn’t need any more reasons for certain policymakers to call for lights out on the industry.