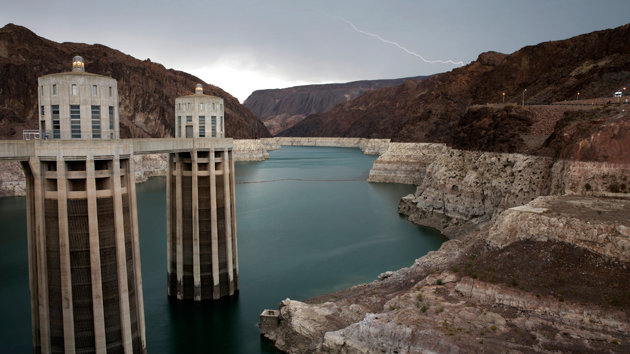 Lake Mead, the largest reservoir in the United States, is 38 percent full. It forms part of the border between Nevada and Arizona.John Locher/AP

California’s been getting a lot of attention for the drought, but it’s not alone in its lack of rain: This year is on track to be the driest on record for several western states. As the map below—a recent iteration from the US Drought Monitor—shows, virtually all of Washington, Oregon, and Nevada are covered in swaths of “severe,” “extreme,” or “exceptional” drought. 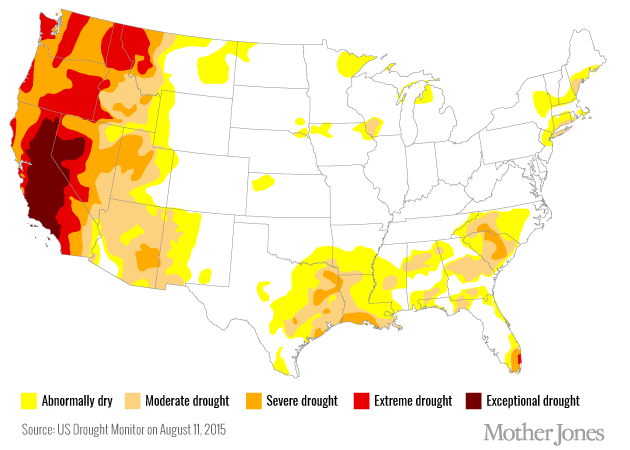 Here’s a primer of the situation in each state:

While Oregon is technically in its fourth year of drought, the state started feeling the effects in earnest in 2014. Since then, Gov. Kate Brown has declared two-thirds of the state’s counties to be in a state of emergency. “The extreme drought conditions we are experiencing reflect a new reality in Oregon,” she said in a July statement.

The past year hasn’t been particularly dry, but it has been abnormally warm, meaning some water is falling as rain but not freezing into a slow-trickling snowpack that feeds streams. While the western side of the state, which relies on rain-fed reservoirs, has been shielded from the worst effects of the drought, the eastern side relies on snowpack, which is at record low levels. The snow that did fall melted more than two months earlier than it usually does.

Of the water that’s diverted from streams and rivers, about 85 percent is used on agriculture. Top products include cattle and milk, hay, wheat, and “greenhouse products” (flowers and herbs). Like in California, irrigation districts are cutting off water to farmers with junior water rights. Farmers are compensating for the lack of surface water by pumping groundwater, but unlike California, Oregon has regulated its groundwater for more than 50 years. In water basins that are deemed to be in critical condition, farmers are prohibited from digging new wells.

Nevada relies on water from the Colorado River, which is stored in two giant reservoirs: Lake Mead, in Nevada, and Lake Powell, in Utah. Las Vegas gets 90 percent of its water from Lake Mead, just fifteen miles away, but the reservoir is just 38 percent full. Still, officials are confident there’s enough in the reservoirs to stave off water cuts, at least for the next year.

With its sprawling cities in the middle of the desert, Nevada has been forced to be smart about water for years. This is in part due to history: The amount of water that localities could take from Lake Mead was decided when the lake was created back in the 1930s, and that allocation has stayed constant while the population of the state has shot up. Las Vegas may seem like a giant party of fountains and pools, but the city recycles (treats and reuses) a whopping 94 percent of water used indoors. The state pioneered “cash for grass” programs, in which residents or businesses get rebates for replacing turf with desert landscaping; since 1999, the state has removed roughly 4,000 acres of turf. In Las Vegas, any home built after the year 2000 is prohibited from having a front lawn.

Like Oregon, Washington derives its water from snow melt and can’t count on El Nino to boost the water supply. Last June, snowpack levels in the state were at their median levels, but by this past May, when Gov. Jay Inslee declared a state of emergency, the levels were at 20 percent of the median. Now, stream levels across the state continue to reach record lows. This has spurred some action: The state allocated $16 million to drought responses over the next two years, including grants to help the agriculture industry, which is a leading producer of apples, milk, wheat, and hops. The Department of Agriculture estimates the drought will cost the state $1.2 billion in 2015 in lost crops, or about 12 percent of past crop values. Some localities are imposing restrictions on watering lawns, and the Seattle/Tacoma area is asking for a 10 percent reduction in voluntary water use to avoid future cuts. 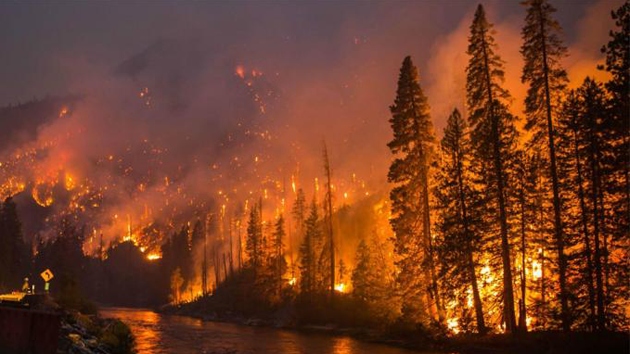 The drought has also turned the normally cool, rainy state into a wildfire hotspot: The state is on track to experience the most destructive and costly year of fires on record. Earlier this week, three firefighters were killed battling a wildfire. “Our fire season started a month ahead, our crops matured weeks ahead and the dry weather we usually get in August, we’ve had since May,” Peter Goldmark, Washington’s commissioner of public lands, told the New York Times earlier this month.

State ecologists are also concerned about the drought’s effects on fish, particularly salmon, which swim upstream in the late summer and fall to spawn but may have trouble doing so this year because streams are so shallow and warm. The state’s Department of Fish and Wildlife is now creating artificial channels, using sandbags and plastic sheeting, to help the fish move upstream.