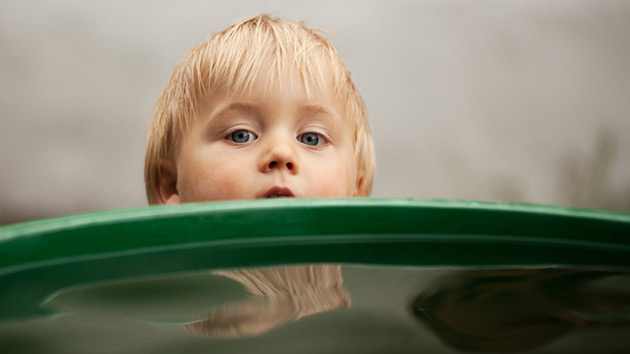 Rainwater harvesting sounds simple, right? People have been setting out containers to catch rain for thousands of years, but collecting rainwater in our thirsty modern world is a messy business. Here’s what you need to know if you’re hoping to stick a bucket under a gutter to conserve water and cut down your water bill.

Why should I collect rainwater? Rainwater can be used for just about anything—from watering plants and flushing toilets to drinking and cooking. With many states facing a serious drought and some areas enacting water-use rules, water conservation has become a popular motive for collecting rainwater. In some rural areas where groundwater is drying up, rainwater catchment has become a necessity.

In urban environments, most rainwater is lost: Only 15 percent of storm water reenters the ground on developed landscapes (as opposed to 50 percent on natural landscapes). The rest runs off or evaporates. A 2,500-square-foot roof can harvest around 1,500 gallons of water from an inch of rainfall, enough to supply a four-person household for four days. By that formula, a similarly sized roof in the San Francisco Bay Area, where it rains almost 24 inches a year (usually), could collect a 100-day supply of water.

Not surprisingly, sellers of rainwater catchment systems are seeing increased interest in dry states. Jesse Froehlich, founder and owner of BlueBarrel Rainwater Catchment Systems, says she has seen an uptick in business over the past year or so. “The drought has raised a lot of people’s consciousness about conserving water and the benefits of rainwater catchment,” she says. Mark Pape, a board member of the American Rainwater Catchment Systems Association and an investor in Rain Harvesting Supplies, says the company’s business has doubled during the last couple of years.

What’s the best way to collect rainwater? Rainwater catchment systems can range from a couple of 55-gallon barrels in the backyard to industrial-scale cisterns that can supply an entire building. But barrels will only get you so far. If you want to use rainwater for flushing toilets or washing clothes, you’ll need a much more complex system. Pape’s company’s systems include 30,000-gallon cisterns, pumps, gauges, and filters, and they can cost anywhere from $5,000 to $15,000 for a single household.

Wait, I heard it’s illegal to harvest rainwater. In every state but Colorado, you can install barrels under your gutters without permits or professional installers, as long as you only use the water outdoors. Colorado lawmakers recently made news when they failed to pass a bill that would allow homeowners to install two 55-gallon rain barrels on their property. The bill failed because of long-standing rules that guarantee the water coming down from the sky to the holders of downstream water rights. 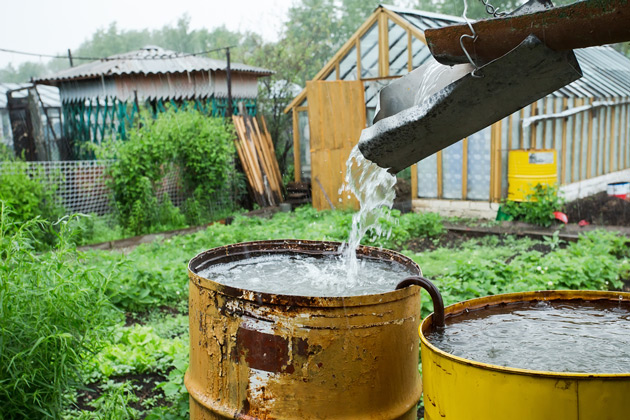 Even if your municipality does allow rainwater catchment, you might have to ask public health officials to approve your system if it connects to your plumbing. (If the system loses pressure, the water in your barrels could flow into city water pipes.) Many health inspectors are unfamiliar with rainwater harvesting and may not approve permits for rainwater harvesting systems, according to Neal Shapiro, a longtime rainwater harvesting advocate who leads the watershed management program in the Office of Sustainability and the Environment in Santa Monica, California.

How big could rainwater catchment get? Perhaps the biggest impediment for rainwater harvesting is the cost. Large-scale rainwater catchment systems remain pricey and municipal water remains very cheap. When you factor in the cost of the collection system, harvested rainwater can cost anywhere from 75 cents to a few dollars per gallon, while municipal water in most areas is as cheap as a fraction of a cent per gallon.* Furthermore, cisterns require a lot of space, which can be hard to come by in dense urban areas.

But as the drought drags on in Western states, the cost of municipal water is increasing, creating new incentives to scoop up rainwater. Last year California voters approved Proposition 1, which will allocate state funds for rainwater harvesting. Some cities have revised their building codes to require new construction to catch rainwater and reuse it on site, including Santa Monica and San Francisco, which recently required large buildings and commercial developments to use recycled water for irrigation and toilet flushing. Most ambitious of all, Los Angeles is developing a plan to harvest rainwater on a large scale by installing cisterns and massive basins around the San Fernando Valley.

Now all we need is some rain.

Correction: An earlier version of this article misstated the typical cost of municipal water.