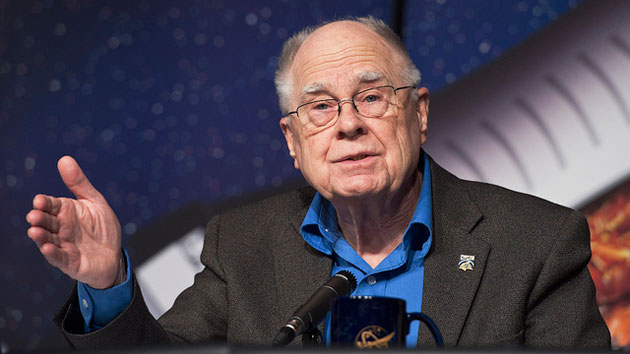 Borucki, 76, retired in July as the principal investigator of NASA’s Kepler Mission, an unmanned spacecraft that has been surveying a portion of the Milky Way for habitable planets since March 2009. The mission has discovered more than 1,000 confirmed planets and inspired many to think about what, if any, life is out there.

But Borucki said it also made him reconsider life on Earth—and its fate in light of climate change.

“The Earth is a very special place,” Borucki said in an interview with the Huffington Post earlier this month. “Unless we have the wisdom and technology to protect our biosphere, it could become like many other dead worlds.”

Borucki, who began his career at NASA in 1962 working on the Apollo mission, was recently awarded the prestigious Shaw Prize for Astronomy in Hong Kong. He is giving a $100,000 portion of his prize money to the science and environmental advocacy group Union of Concerned Scientists to help with climate work.

“There must be an enormous number of small planets roughly Earth size, in the habitable zone of the stars—billions or tens of billions of such planets,” said Borucki. If there were life there, one would assume it would evolve into organisms of higher intelligence capable of communication. Yet we haven’t heard from them, and there’s no evidence of other life forms visiting Earth. Borucki said that forces us to ask why not.

“It’s not a silly question anymore,” he said. “You used to be able to dismiss it—say there aren’t any planets, or they aren’t in the habitable zone. That’s not true anymore. We know there are habitable planets. The question that is really important is what happened to them?”

“Could that mean that other civilizations did not recognize the critical importance of maintaining a hospitable climate?”

One potential scenario Borucki raises: “Could that mean that other civilizations did not recognize the critical importance of maintaining a hospitable climate?”

That prospect concerns him. “It really warns us that we need to think very, very carefully about how we protect our biosphere, how to protect our climate,” he said. “It wouldn’t take a lot of change to make the planet uninhabitable for ourselves.

I asked Boruki whether the explorations had led him to believe there’s potential for human life on another planet—an idea raised often in science fiction. “No,” he said. “The possibility of being able to send people, particularly a large number of people, to settle another planet orbiting another star seems extremely small.”

Borucki’s earlier research contributed to improved understanding of the ozone layer, and of how human activity could cause its depletion. In the case of ozone, scientific research helped motivate world leaders to take political action to reverse the trend, leading to the signing of the Montreal Protocol in 1987 and subsequent updates. When it comes to climate change, which leaders have been slower to address, Borucki acknowledges that the “required changes are much more extensive in affecting changes in industry and livelihoods.”

Yet he said he remains optimistic: “We must not get discouraged because it takes such a long time for a consensus to occur among world leaders and for the development of practical methods to accomplish the necessary changes.

“Once mankind understands the threat, I think they will get together ultimately and conquer that threat,” he continued. “But they have to recognize it and really be dedicated to accomplishing the task, because the tasks are just enormous.”