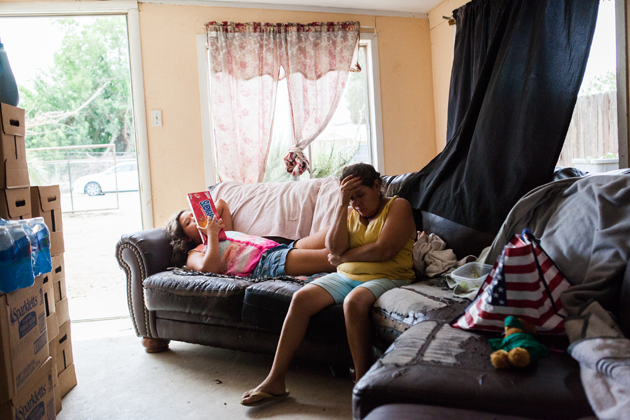 Juana Garcia, 49, and her daughter, Noemi Castro, 11, in their home in East Porterville, California. The family has had a dry well for the past two years. Gabrielle Lurie

Glance at a lawn in East Porterville, California, and you’ll instantly know something about the people who live in the house adjacent to it.

If a lawn is green, the home has running water. If it’s brown, or if the yard contains plastic tanks or crates of bottled water, then the well has gone dry.

Residents of these homes rely on deliveries of bottled water, or perhaps a hose connected to a working well of a friendly neighbor. They take “showers” from a bucket, use paper plates to avoid washing dishes, eat sandwiches instead of spaghetti so there’s no need to boil water, and collect water used for cooking and showers to pour in the toilet or on the trees outside.

East Porterville is in Tulare County, a region in the middle of California’s agriculture-heavy Central Valley that’s been especially hard hit by the state’s historic drought. More than 7,000 people in the the county lack running water; three quarters of them live in East Porterville. The community doesn’t have a public water system; instead, residents rely on private wells. But after years of drought, the nearby Tule River has diminished to a trickle and the underground water table has sunk as more and more farmers rely on groundwater. Last week, I spent a few days interviewing residents in the town, also known as “ground zero” of the drought. 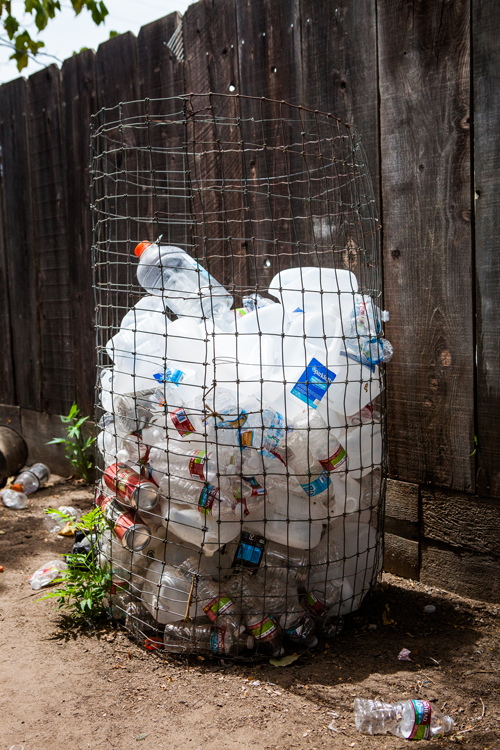 Tulare County delivers bottled drinking water to dry homes, where each resident receives half a gallon per day. Gabrielle Lurie

Like many small towns in the Central Valley, East Porterville is home to the pickers and packers of the fruits, veggies, and nuts grown nearby and distributed across the country. Many are poor; more than half of kids growing up in East Porterville fall below the poverty line. Throughout the town are the telltale signs of rural poverty: Dogs guard run-down trailers and homes, and roads of uneven pavement devolve into dirt without warning. The air is hazy with dust from the fields and roads. It clings to the tables and chairs and boxes of bottled water left outside; it collects between fingers and toes, turning the shower water a cloudy brown. Everyone coughs. Asthmatics end up in the emergency room. 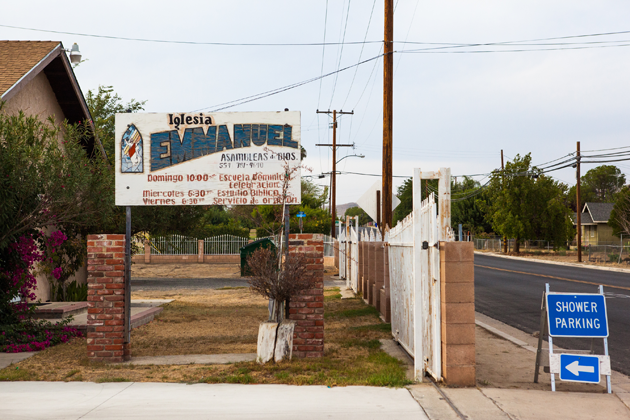 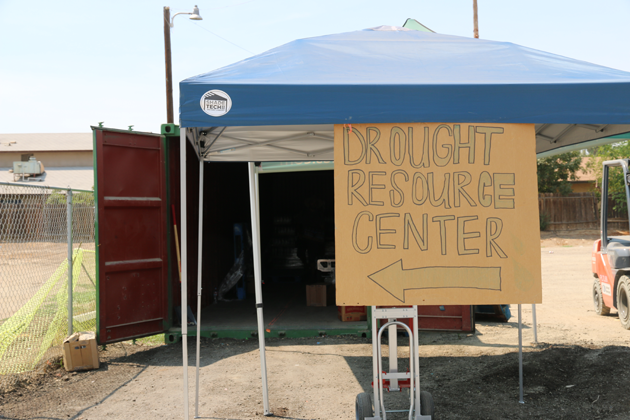 At the county’s drought resource center—a trailer in East Porterville—residents can sign up for bottled water deliveries, take showers, and apply for loans to fund well drilling. Julia Lurie 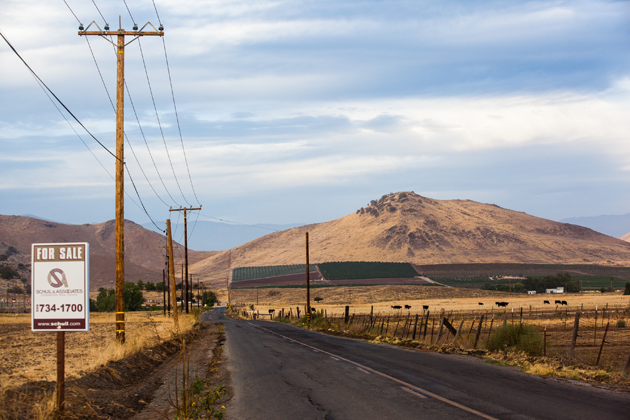 Despite fallowing farmland because of the drought, Tulare County continues to lead the nation in sales of agricultural products. Gabrielle Lurie

Among the first to report a dry well was Donna Johnson, a 72-year-old retired recreational therapist who lives in East Porterville with her husband, Howard, and a handful of rescue dogs. In the spring of 2014, she turned on the tap to find that it had reduced to a dribble—then no water at all. Howard tried to extend the pump further into the well, but where there should have been a splash of water, there was simply a “thud” of solid against solid. When Johnson called a well-driller and learned the company had a long waiting list, she started wondering just how many wells had gone dry. After a couple of weeks of knocking on the doors of strangers in her neighborhood, Johnson had a list of more than 100 homes.

Over the past 18 months, Johnson has become known as East Porterville’s “water lady,” as she spends her days collecting donations of water and paper goods and delivering them in a pickup truck to a list of homes with dry wells—a list that’s expanded to hundreds of addresses. “There’s always somebody calling, saying, ‘I don’t have water!'” she said. 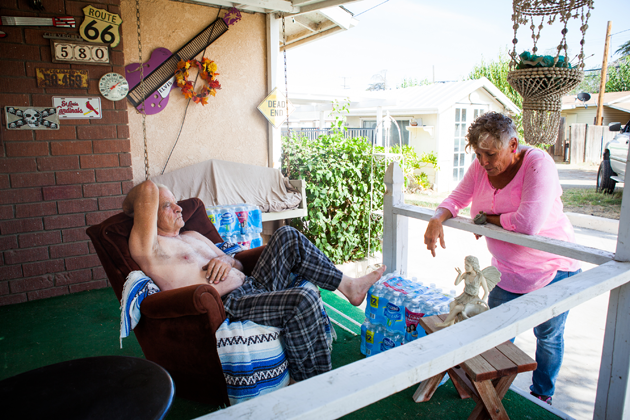 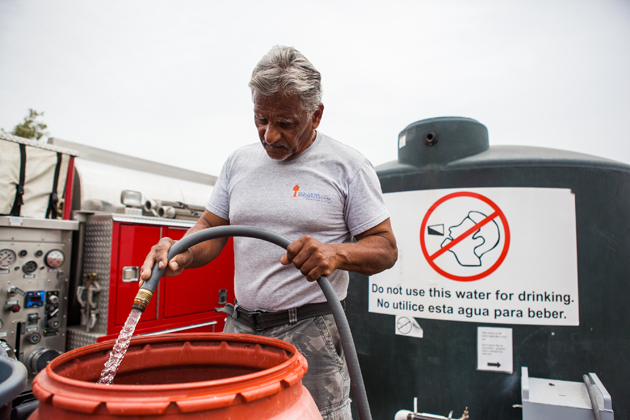 Reuben Perez fills up a barrel of water at the public tank to bring to Juana Garcia’s home. The water will be used to do laundry, take bucket showers, and flush the toilet. Gabrielle Lurie

The county, in part prompted by Johnson’s discovery, has also stepped in. Locals can now bathe in portable showers outside the Drought Resource Center (a trailer set up in a church parking lot) and sign up for bottled-water deliveries (half a gallon per person per day). Tanks of nonpotable water sit outside the fire station; in the evenings, residents fill up barrels for things like laundry and bathing.

As an interim solution, the county is installing large plastic tanks of water connected to some dry homes. But progress has been slow. So far, 320 tanks have been installed; more than 1,300 still remain dry.

It doesn’t help matters that homes in the directly adjacent, slightly wealthier town of Porterville have running water from the town’s municipal water system. Perhaps the most glaring example of this is on the city boundary: Locals take showers at Igelsia Emmanuel in East Porterville; directly across the street, in Porterville, is a patchy but green golf course. 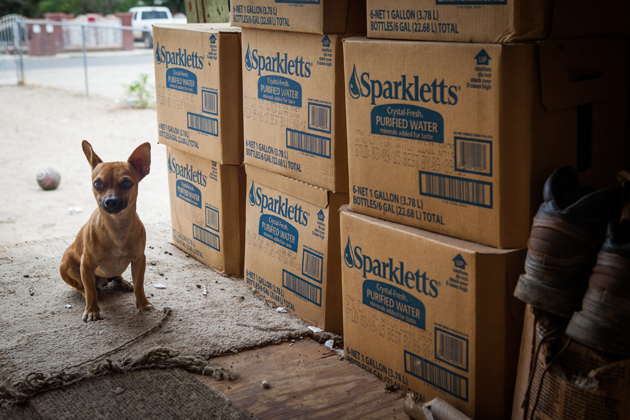 Some pets are fed potable water delivered by the county, while others are left with dirtier water or are abandoned. Gabrielle Lurie 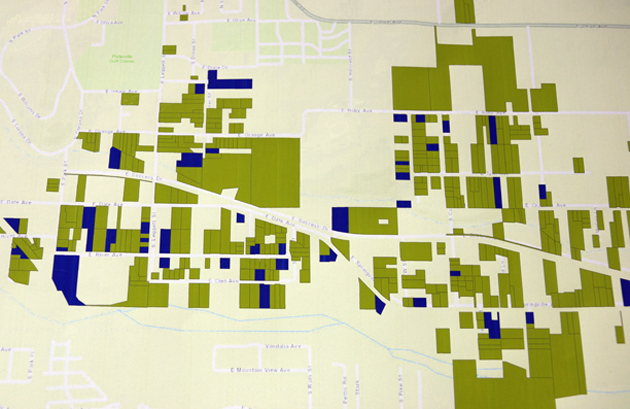 A map of East Porterville at the county’s drought resource center shows homes without running water (green) and homes where large tanks have been installed as an interim solution (blue). Julia Lurie

East Porterville residents without running water have fallen into a tedious routine. Juana Garcia, a 49-year-old mother of five, lost water two years ago—in some ways, her living conditions remind her of those she left behind in Mexico when she moved to East Porterville in 1988. The change has been particularly challenging because she suffers from Lupus and arthritis, making it difficult to haul water to her home or make the trek to the public showers.

Garcia doesn’t speak much English, so her daughter, a talkative 11-year-old named Noemi, walked me through the daily routine. Dishes are washed in two buckets: one for soaking, the other for rinsing. Afterward, water is dumped into the toilet so it will flush. For showers, Garcia boils water that Johnson hauled in from the gas station (Garcia doesn’t have a car), or she takes her kids to the portable shower in front of the church. Teeth are brushed with bottled water; clothes are hand washed and air-dried unless a friend has time to take the family to the laundromat.

The trees in the backyard used to yield pears, lemons, and pomegranates, but they’re all dead now; any extra water is used to fuel the swamp cooler, which, Noemi explained, uses five gallons of water an hour—and it’s a necessity as temperatures routinely top 100 degrees. For dinner, Garcia makes things that require minimal water and won’t heat up the house—like microwave meals or sandwiches. 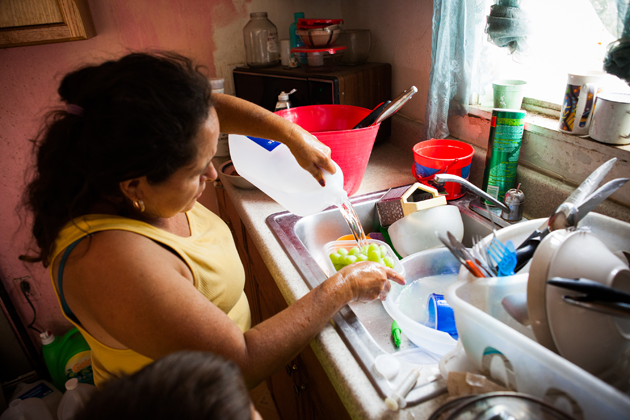 Juana Garcia washes grapes with bottled water. She soaks dirty dishes in soapy water before rinsing them to minimize water use. Gabrielle Lurie 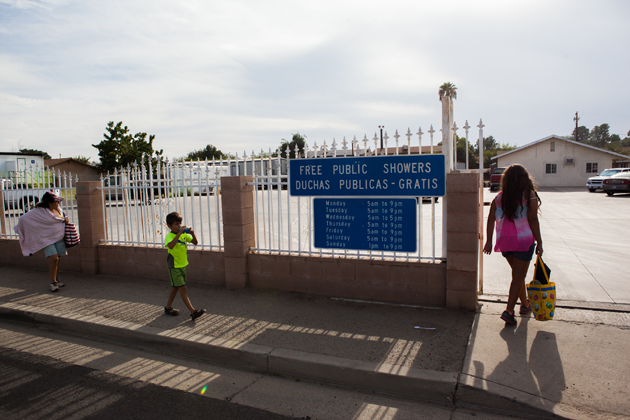 Juana Garcia, 49, trails behind her kids, Noemi and Christopher Castro, 11 and 5, on the way to the public showers. Gabrielle Lurie 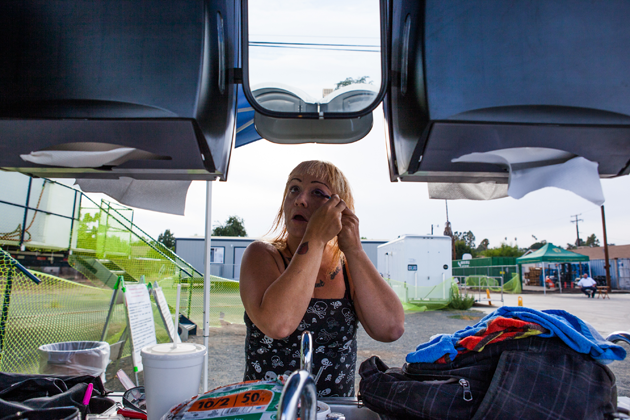 An impressive coalition of local supporters have stepped up to help residents like the Garcias. At Iglesia Emmanuel, Pastor Roman Hernandez has been distributing crates of bottled water for months, and organizes services around the Central Valley to pray for rain.

Granite Hills High School, which serves East Porterville students, opens its showers early so that students without water can use them. Many students come from families who are struggling financially because of lack of work; the number of students who eat free breakfast and lunch at school has skyrocketed over the past year. 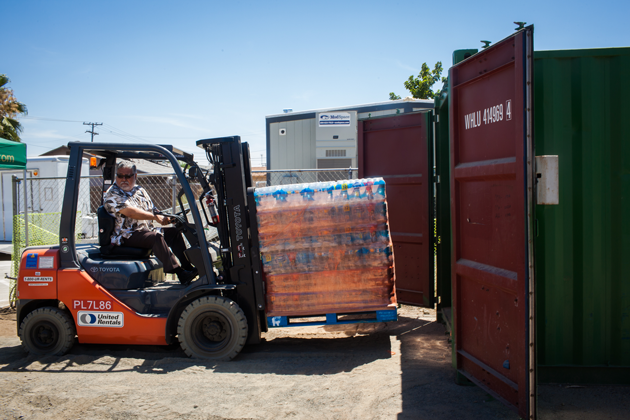 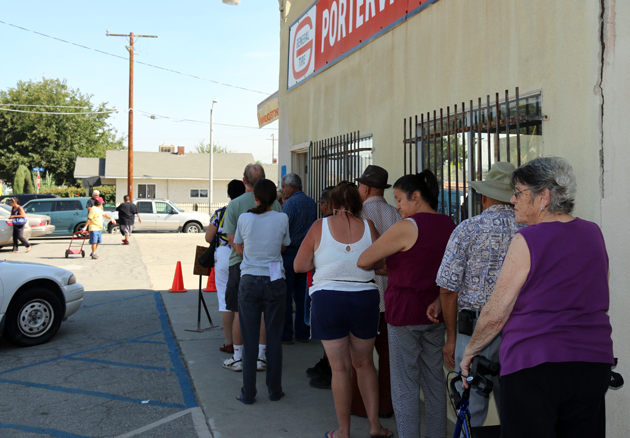 Residents line up to pick up emergency boxes of food. Julia Lurie 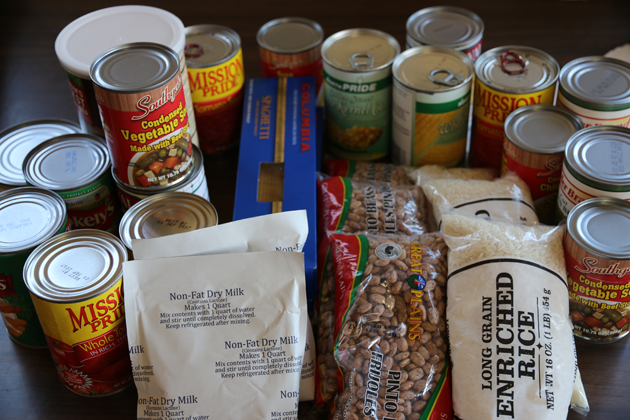 FoodLink, a local nonprofit, delivers staples to those for whom money is tight because of the drought. Julia Lurie 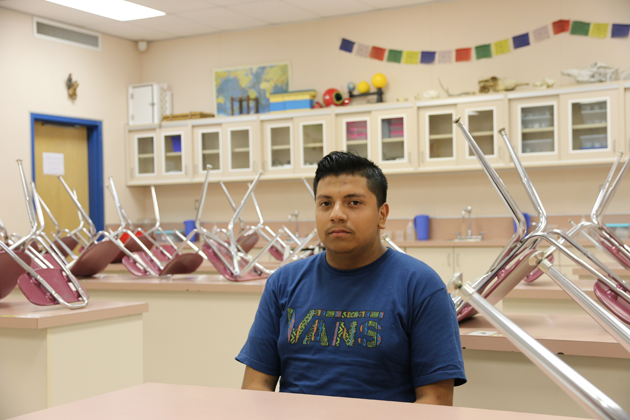 Luis Diaz, a junior at Granite Hills High School, has running water at home, but his parents, who work in the fields, have struggled to find work. Julia Lurie 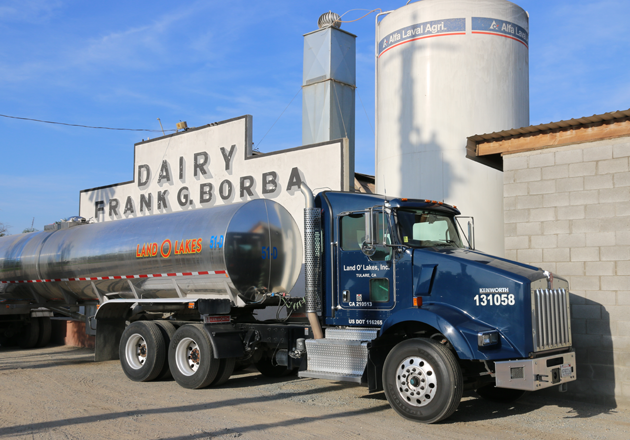 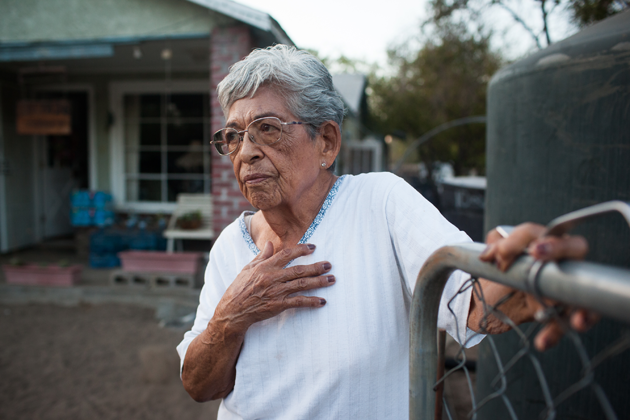 Vicky Yorba, 95, stands beside the water tank in her front yard. Gabrielle Lurie

It’s tempting to blame agriculture for the disaster in East Porterville; after all, farmers’ increased reliance on groundwater is largely responsible for lowering the underground water table to begin with. But the reality, dairy farmer Eric Borba told me, is that “people wouldn’t be living here if it weren’t for ag.”

Many residents I spoke with said that while performing daily tasks without running water is challenging, the sentimental losses are the toughest to face: favorite trees that died, pets and farm animals that had to be let out into the streets. When Vicky Yorba, a 95-year-old, moved to East Porterville in the 1960s, she and her husband planted a garden of geraniums and roses together. “My favorite was geraniums,” she remembered. “I had all kinds of them.” Yorba’s husband died more than 20 years ago, but the plants lived until last year, when her well went dry. Now, they’ve been replaced by a plot of dirt.