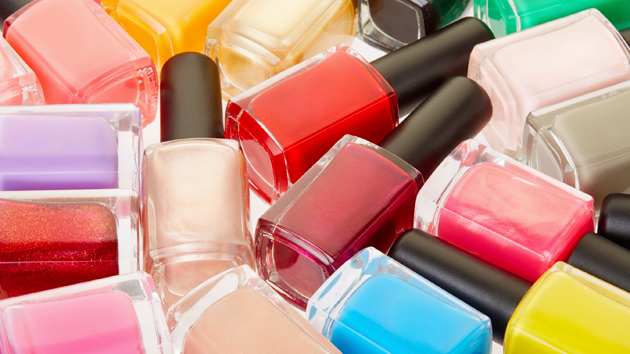 Want some toxins with that mani-pedi?

A new study by researchers at Duke University and the Environmental Working Group found that a common nail polish chemical and suspected endocrine disruptor called TPHP is leaching into the bodies of polish-wearers.

The researchers theorize that the chemical leached through the cuticles, or that another ingredient in the polish made the nails more permeable.

TPHP, also known as TPP, is commonly used as a fire retardant in furniture and a hardener in plastic goods. According to the authors, research suggests that the chemical causes changes in hormone regulation, metabolism, and reproductive systems.

The study, published today in Environmental International, found that women who painted their nails with polishes containing TPHP saw a sevenfold increase of a TPHP metabolite (a substance formed when the body metabolizes TPHP) just 10 to 14 hours after painting their nails.

“It is very troubling that nail polish being marketed to women and teenage girls contains a suspected endocrine disruptor,” said Johanna Congleton, a co-author of the study, in a press release. “It is even more troubling to learn that their bodies absorb this chemical relatively quickly after they apply a coat of polish.”

TPHP is a common addition to nail polishes; an analysis of EWG’s Skin Deep database found that about half of all nail polishes—or 1,500 polishes in the database—contain the chemical, including popular brands like OPI, Sallie Hansen, and Revlon. (Below are a few big-name brands; here‘s the complete database.) 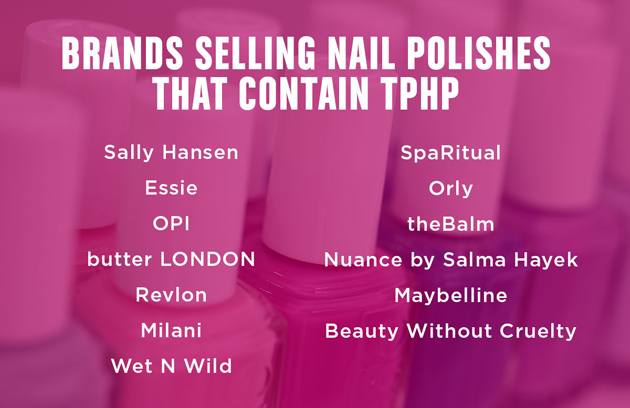 To figure out if the chemical was being absorbed from fumes or directly from the nails, some women in the study wore gloves and applied polish to synthetic nails, while others applied polish directly to their own nails. The TPHP metabolite levels of the former group didn’t change significantly while the latter group saw a sevenfold increase, suggesting that fumes weren’t the main vehicle for the chemical. Nails are impermeable to most molecules, so the researchers theorize that the chemical leached through the cuticles, or that another ingredient in the polish made the nails more permeable.

It’s still unknown if the levels of TPHP coming from nail polish are harmful to the body, as most of the studies on the effects of TPHP have been conducted on animals.

It’s also unknown if there’s a less toxic chemical that could replace TPHP in nail polishes. The chemical acts as a plasticizer, making the polish flexible but durable. It may have replaced a chemical called DBP, which fell out of popularity when it was found to be a hormone disruptor. If companies move away from TPHP, as they did with DBP, the challenge is making sure the replacement isn’t just as toxic as the original. “I’m assuming that if you need a plasticizer, there are other options available,” said Congleton in an interview. “But I would want to be able to identify what those are and make sure the right questions have been asked.”