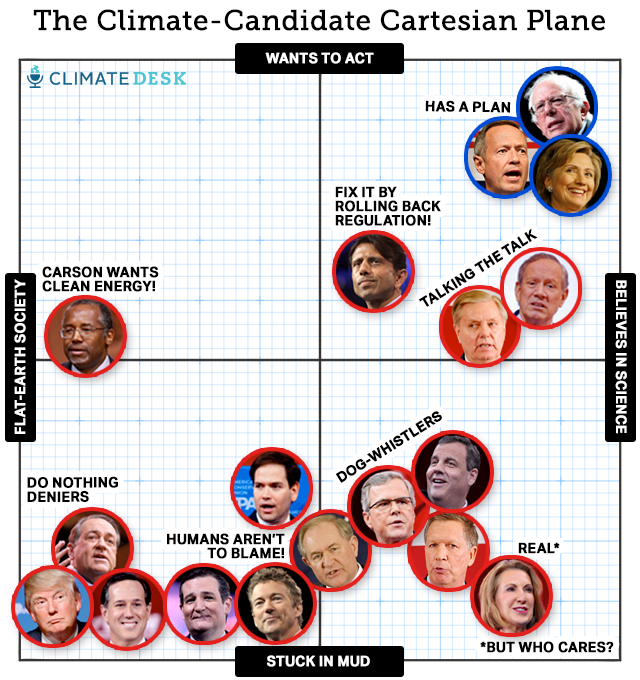 At first glance, there are just two groups of presidential contenders when it comes to climate change: those who think it’s real and urgent, and those who don’t. But take a closer look, and the picture blurs. The matrix above depicts subtle differences, at least in the Republican field, in the extent to which the candidates believe the science and want to act on it. Of course, selecting each set of coordinates wasn’t an exact science—many of the White House hopefuls have a history of confused and contradictory statements on the issue. But here’s a short analysis of the candidates’ positions on global warming and an explanation of how we came up with this graph. 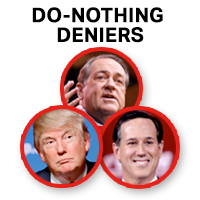 The First, the “Do-Nothing Denier” crowd—Donald Trump, former Arkansas Gov. Mike Huckabee, and former Pennsylvania Sen. Rick Santorum, all Republicans—reject or aggressively downplay the science of man-made climate change, and they don’t want to do anything about it. They occupy the bottom-left corner of our matrix because they’ve called global warming a “hoax” (Trump) or “junk science” and “patently absurd” (Santorum), and have pushed dumb pseudoscience, such as Huckabee’s insistence that “a volcano in one blast will contribute more than 100 years of human activity.” Santorum gets a little bit of a nudge to the right on our graph for saying during Wednesday’s presidential debate that “if we really want to tackle environmental problems, global warming, what we need to do is take those jobs from China and bring them back here to the United States, employ workers in this country”—which does sort of implicitly admit there’s a problem. 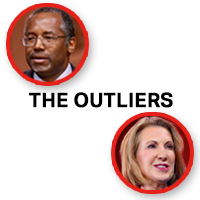 Former neurosurgeon Ben Carson, somewhat surprisingly, is an outlier on the denial side of the matrix. He told the San Francisco Chronicle in September, “There is no overwhelming science that the things that are going on are man-caused and not naturally caused.” (That comment inspired California Gov. Jerry Brown to send Carson a thumb drive full of climate research.) But Carson moves up in our estimate because of his apparent support for alternative energy. Maybe it was more “thought bubble” than policy, but he said he’d like to see “more than 50 percent” clean energy by 2030. “I don’t care whether you are a Democrat or a Republican, a liberal or a conservative, if you have any thread of decency in you, you want to take care of the environment because you know you have to pass it onto the next generation,” he said in a separate interview.

Sure it’s real, but we shouldn’t act on it alone, or at all. That’s basically the position of our next Republican outlier, Carly Fiorina, the former head of Hewlett-Packard. She appears to accept the science (mainly by avoiding it), but she doesn’t want to act on it, positioning herself as anti-regulation: “A single nation acting alone can make no difference at all,” she told CNBC, and therefore the United States needs to stop “destroying peoples’ livelihoods on the altar of ideology.” Fiorina’s opposition to climate action is pretty standard for the Republican pack. But her rivals have a more problematic history of tangling with the science. 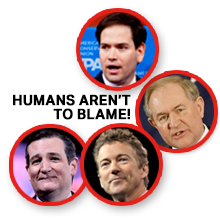 Let’s move on to the “Humans Aren’t to Blame” crowd—those candidates, all Republicans, who admit that the climate is changing but question just how much it can be attributed to humans burning fossil fuels. Take Florida Sen. Marco Rubio. He voted “yes” on a resolution declaring that climate change is real and not a hoax. He has promised to reverse President Barack Obama’s clean-energy rules, but his campaign did announce a detailed energy policy that included “affordable fuel alternatives” (raising his position slightly up the “action” axis in our matrix). Still, Rubio actively casts doubt on humanity’s role in warming the planet by saying things like, “I do not believe that human activity is causing these dramatic changes to our climate the way these scientists are portraying it.”

It could be argued that Ted Cruz belongs with the “Do-Nothing Denier” crowd on our matrix. But he at least engages in the science, somewhat. He voted in the Senate to call climate change real, but he has also called it a “pseudoscientific theory.” He subscribes to the “there’s no warming lately” theory: He told Seth Meyers that “satellite data demonstrate for the last 17 years there’s been zero warming, none whatsoever”—a statement that one climate expert criticized as “a load of claptrap…absolute bunk.” Senator Rand Paul from Kentucky acknowledges that the world is warming because of carbon, but he has also said he is “not sure anybody exactly knows why” climate change is happening. Somewhere over here is Jim Gilmore, the former governor of Virginia, who has, at times, called for acting on climate change, even if he’s not totally sure what’s causing it. “We do not know for sure how much is caused by man and how much is part of a natural cycle change,” he said in 2008, adding, “I do believe we must work toward reducing emissions.” More recently, however, Gilmore has called the goal of reducing carbon emissions “ephemeral” if China and India don’t act, too. 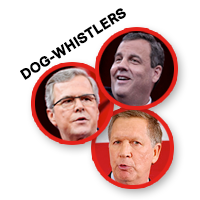 That brings us to a pack of Republicans with mixed histories on the issue. These candidates have at times acknowledged the science and importance of climate change, and may have even advocated steps to act on it, but they don’t want to be tarred and feathered as liberals. I’m calling them “Dog-Whistlers.” Jeb Bush, the former governor of Florida, is among this crowd. In general he says humans contribute to the globe’s warming, but he insists Obama’s policy agenda is wrong. “I think we have a responsibility to adapt to what the possibilities are without destroying our economy, without hollowing out our industrial core,” he told Bloomberg. What makes him different from Fiorina is that he previously claimed it was arrogant to assume the science was settled. And Bush’s energy policy proposes more drilling and less regulation—so not an all-star climate plan there.

New Jersey Gov. Chris Christie likes to brag about his state’s position as the country’s third-largest solar energy producer—and he did so again during Wednesday night’s CNBC presidential debate. But in 2011, Christie withdrew New Jersey from the Regional Greenhouse Gas Initiative (RGGI), a cap-and-trade program in the Northeast. And while he believes in climate change, he hasn’t put forward any concrete proposals yet. I’m going to put Ohio governor John Kasich in this clique, too. He started off sounding pretty moderate on the issue and has historically voiced his support for climate science. But then, as a candidate, he walked his position toward the Republican mainstream by saying, “We don’t want to destroy people’s jobs, based on some theory that is not proven.” Noncommittal, at best. 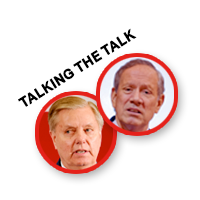 Curious in the club of Republicans are South Carolina Sen. Lindsey Graham and former New York Gov. George Pataki, who have both urged action on climate change. Graham told CNN, “If I’m president of the United States, we’re going to address climate change, CO2 emissions in a business-friendly way.” He added, “When 90 percent of the doctors tell you you’ve got a problem, do you listen to the one?” Graham backed this up during the debate Wednesday by saying, “You don’t have to believe that climate change is real. I have been to the Antarctic. I have been to Alaska. I am not a scientist, and I’ve got the grades to prove it. But I’ve talked to the climatologists of the world, and 90 percent of them are telling me the greenhouse gas effect is real, that we’re heating up the planet.” Pataki was one of the driving forces behind RGGI’s creation. In 2007, he was named co-chair of the Independent Task Force on Climate Change organized by the Council on Foreign Relations and has become an advocate for climate action and green-friendly enterprise. He told the debate audience Wednesday that “one of the things that troubles me about the Republican Party is too often we question science that everyone accepts.” But Graham and Pataki are positioned lower on the matrix than the Democrats because neither of them has rolled out a clear and convincing plan explaining how they’d address climate change as president. 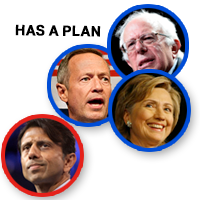 Now we move farther into the top right-hand quadrant, where candidates believe in science and really want to act on it. Louisiana Gov. Bobby Jindal says he would repeal Obama’s climate regulations, but he has laid out smaller-scale projects such as forest management and the energy efficiency for airlines. For the record, he has called for action to combat warming temperatures—but he is a bit squishy. In 2014 he said, “Let the scientists decide the underlying facts,” and he questioned “how much” humans actually contribute to warming. Still, he earns a place in the top-right section of the graph because of a detailed energy policy that includes wind and solar.

Three Democrats vying for the nomination—former Secretary of State Hillary Clinton, Vermont Sen. Bernie Sanders, and former Maryland Gov. Martin O’Malley—all believe in climate change, want to do something about it, and have serious plans to combat it. Experts have weighed in on the strengths and weaknesses of each of their proposals, but for the purposes of this chart, they are all in essentially the same place. Clinton has put installing a half billion solar panels by 2020 at the heart of her clean-energy policy and wants to best Obama’s own plans by generating 33 percent of America’s electricity from renewable sources by 2027. Sanders has said that “we have a moral responsibility to transform our energy system away from fossil fuel to energy efficiency and sustainable energy and leave this planet a habitable planet for our children and our grandchildren.” He’s also described climate change as the country’s greatest national security threat. O’Malley wants to phase out fossil fuels entirely by 2050. “As president, on day one, I would use my executive power to declare the transition to a clean energy future the number one priority of our Federal Government,” he wrote in a USA Today op-ed in June.

Mapping politicians like this is always a tricky process, and some of our expert readers will no doubt disagree with these conclusions. So tell us what you think. Leave your thoughts about the candidates’ various plans in the comments below to add to the discussion.