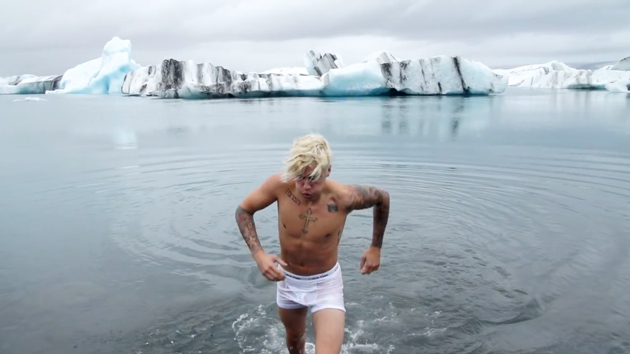 Canadian pop star Justin Bieber has followed up his streak of recent dance hits with a new, slower and more introspective ballad this week, “I’ll Show You”, co-produced by Skrillex (one of the guys behind his summer chart-topper, “Where Are Ü Now”). The music video shows gorgeous floating aerials of Iceland’s gorges, glaciers, and crashing waves as Bieber ponders the meaning of a life lived so publicly—”I’ve got to learn things, learn them the hard way/Got to see what it feels like, no matter what they say”—then strips down to his (brand tie-in) Calvin tighty-whities for a dip in the frigid water.

It’s kind of like his very own Britney-coming-of-age classic “I’m Not A Girl, Not Yet A Woman.” 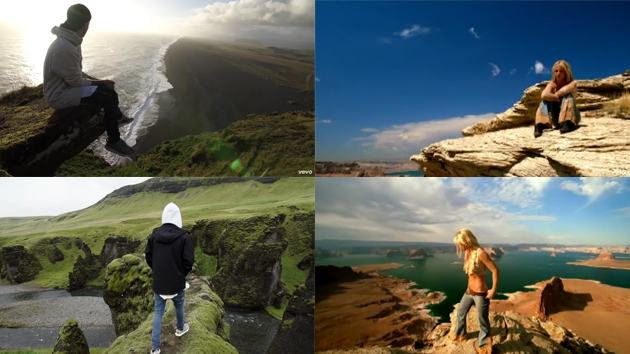 It’s been a while since the Icelandic landscape has been so lovingly filmed in a big-time, mainstream music video (Michel Gondry’s hyper-stylized “Jóga,” for Björk‘s 1997 album Homogenic—far more sweeping and luxurious than Bieber’s—is the one that sticks in my mind most clearly.) Bieber skateboards atop a plane wreck in Sól­heimas­andur, in southern Iceland, and rolls around in the moss near tourist spots, according to Iceland Review.

But here’s the part of this video that no one’s talking about: The glacial waters Bieber dips his tattooed frame into, identified by multiple Icelandic media outlets as Jökulsárlón glacier lagoon, are in serious danger. (Leonardo DiCaprio was also photographed here by Annie Leibovitz for Vanity Fair in 2007.)

“If current trends continue, the glaciers are going to melt more, and the lake is going to get bigger and bigger.”

According to the South East Iceland Nature Research Center, the glacier lagoon may look completely different within five years because of receding ice and debris from melting icebergs that are breaking apart. Meanwhile, fundamental aspects of the geography surrounding the lagoon will collide and shift, sometimes hundreds of meters.

The lagoon sits at the head of the Breiðamerkurjökull glacier. Its retreat, multiple research papers say, has increased because of rising global temperatures. Warmer, salty water undercuts the massive glaciers—speeding up their destruction and run-off from the ice sheet. And as that happens, the lake where Bieber is swimming will expand.

In fact, it already has expanded dramatically. One peer reviewed study from the School of Geography and Earth Sciences at McMaster University in Canada says this glacial lagoon has already increased from 5.6 square miles in 1999 to 9.8 square miles in 2014, and could more than double to 21.7 square miles by 2055. Winnie May Chan, who co-wrote the study, told me that “If current trends continue, the glaciers are going to melt more, and the lake is going to get bigger and bigger”—which could lead to more frequent flash flooding in the area, a peril to nearby communities.

Another effect of warming: Once upon a time, glaciers terminated on the land, not into lakes. Since 1995, the margins of these glaciers now stop fully or partly in the coastal lakes themselves, something that alarms scientists because it can speed up the melting process, according to a 2010 research report by Anders Schomacker, at the University of Iceland.

So Justin, you’re lucky because you got to dance around on these glaciers before they’re completely unrecognizable. The landscapes you enjoyed while filming are about to get a serious makeover—one more dramatic than your own current “I’m sorry for being a tool” apology tour—and one that provides an alarming insight into changes right through Iceland and the Arctic regions.