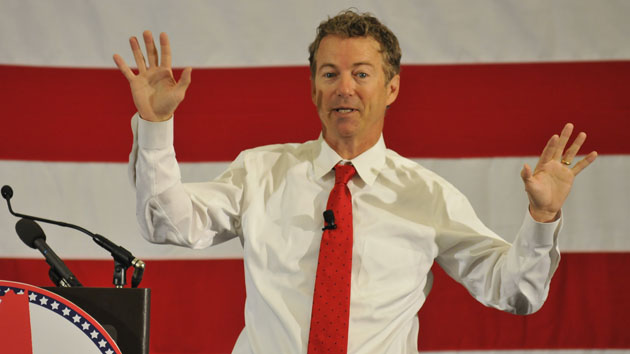 This story originally appeared in The New Republic, and is reproduced here as part of the Climate Desk collaboration.

Rand Paul was having a decent night in the fourth Republican debate Tuesday, until he fielded a question about climate change. With his answer, he disappointed those who thought he might deliver reality-based comments.

Paul, like the rest of the GOP candidates, wants to repeal President Barack Obama’s legacy-making Clean Power Plan reining in carbon emissions from the power sector. On Tuesday, Paul firmly aligned himself with the science-denier camp. “While I do think man may have a role in our climate, I think nature also has a role,” Paul said. “The planet is 4.5 billion years old. We’ve been through geologic age after geologic age. We’ve had times when the temperature’s been warmer. We’ve had times when the temperature’s been colder. We’ve had times when carbon in the atmosphere has been higher. So I think we need to look before we leap.”

Paul at least got the age of the Earth right, before adopting a familiar point about pursuing an all-of-the-above energy strategy, suggesting that Obama has forgotten about fossil fuels. If we shut down all the coal power plants, Paul warned, “we would have a day where we wake up where our cities are very cold or very hot.”

Both Paul and Jeb Bush have played coy about their climate positions until this point. Bush, who has called climate change a threat, insisted at multiple points during the debate that he would repeal the Clean Power Plan and any Obama regulation on climate change, leaving the private sector to come up with a solution to global pollution. For a brief moment, Paul seemed to be considering joining the few Senate Republicans willing to say that climate change is a critical issue. He was one of 15 Republicans to vote for a conservative resolution in January admitting that humans play a role in climate change. In 2014, Paul told HBO’s Bill Maher, “There’s abundant evidence that carbon is increasing and has increased since the industrial age. All I ask for is that the solution has to be a balanced solution and that you have to account for jobs and jobs lost by regulation.”

Candidates sometimes look like they are progressing (haltingly) in the right direction in the climate debate. On Tuesday, Paul moved decidedly in the wrong direction.