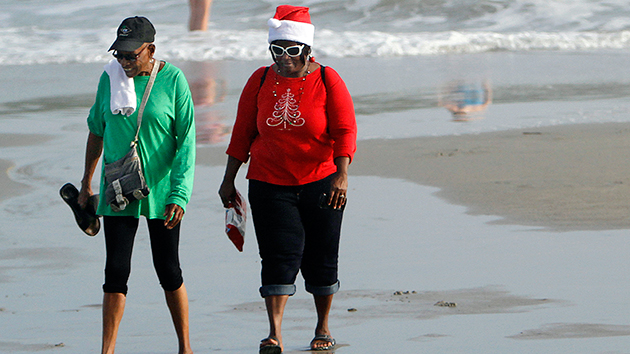 It’s official. The United States roasted in 2015. All that unseasonably warm December weather that saw flowers blooming in Central Park and shirtless Christmas Day volleyball set a record, according to the National Oceanic and Atmospheric Administration (NOAA), which released its year-end findings on Thursday. In fact, 29 states in the eastern half of the country experienced their hottest Decembers on record, a phenomenon that sealed 2015’s fate: It was the second-warmest year ever recorded in the contiguous United States.

“2015 really blew away the competition” for December temperatures, said Jake Crouch, a NOAA climate scientist, during a teleconference with reporters. The entire year’s temperatures are “emblematic of what will be ultimately the warmest year around the globe,” he said. NASA and NOAA are expected to release global data later this month.

“December [2015] currently is the only month that holds both the title for wettest and warmest month” since NOAA began keeping this data, said Crouch. Two things acting in unison helped create those conditions. A strong phase in what’s known as the “Arctic Oscillation“—a seesaw pattern of differences in Arctic atmospheric pressures that has a big impact on North America—and El Niño, which typically results in hotter and wetter conditions in the East.

The annual average temperature across the United States was 54.4 degrees Fahrenheit last year. That’s 2.4 degrees warmer than the 20th century average. NOAA confirmed that 2015 was the 19th-consecutive year that national temperatures remained above that average. Every state saw hotter than average annual temperatures. Oregon, Washington, Montana, and Florida all experienced their hottest year ever recorded. 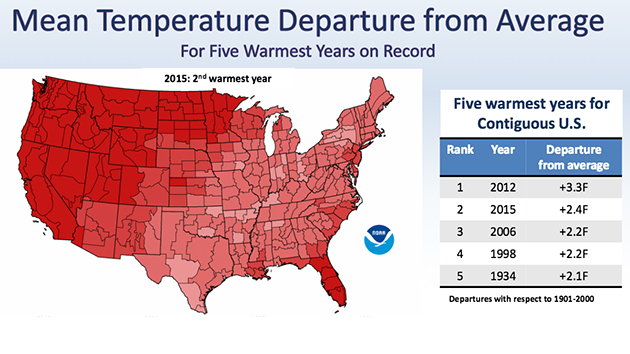 NOAA also highlighted 10 climate and weather disasters from 2015, each exceeding losses of $1 billion—including the historic drought plaguing California. The deadliest weather event of 2015 was the late-December tornadoes that ripped across the South, killing more than 50 people, according to NOAA. 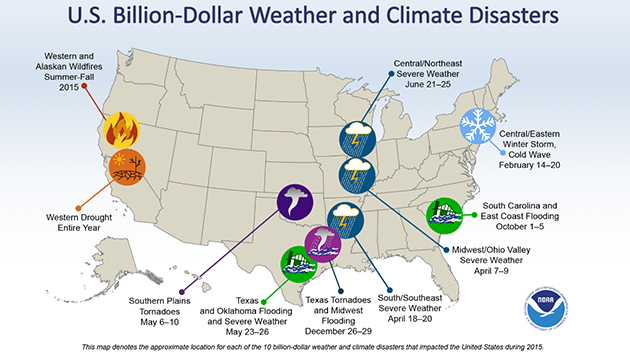 2015 was also the third-wettest year on record for the contiguous United States. Precipitation was more than 4.5 inches above the 20th-century average. Texas and Oklahoma had their wettest years on record.

The temperature records cap a dramatic year in climate politics. While leaders of nearly 200 nations met in Paris and agreed to a historic deal to combat climate change, Republican politicians continued to dispute climate science and even hurled conspiratorial allegations at the agency that released today’s report. Sen. Ted Cruz (R-Texas) held a hearing to challenge what he sees as faulty climate data, while his colleague in the House, Rep. Lamar Smith (R-Texas), accused government scientists from NOAA of rigging climate data to disprove the so-called “global warming pause.” Democratic presidential candidates, on the other hand, have uniformly embraced climate science as central to their campaigns, each releasing detailed policies to curb global warming and invest in alternative energy.