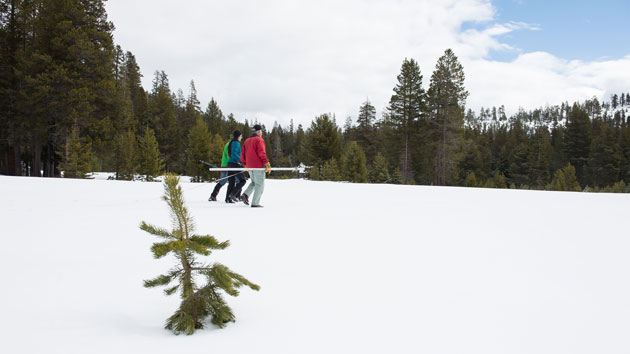 Snow surveyors recorded a much higher number than they did last year, but that doesn't mean the drought is done.Kelly M. Grow/California Department of Water Resources

Update, 5/10/2016, 12:30 EST: California Gov. Jerry Brown on Monday issued an executive order that extends the state’s 2014 restrictions on water usage, despite a season of heavy rainfall. Brown said in a statement that water conversation must be a “way of life” in California.

March 30, 2016: Ninety miles east of Sacramento in the Sierra Nevada mountains, snow surveyors plunged aluminum rods into the snow on Wednesday morning and recorded quite a different number than they did the year before: 58.4 inches.

The March 30 measurement is welcome news for drought stricken Californians, and a stark contrast from 2015’s record low of zero inches, the lowest number the Sierra had seen since measuring began in the 1940’s. This year’s snow pack is just about equal to the annual average—but that still won’t provide enough melt water to say the drought is over. 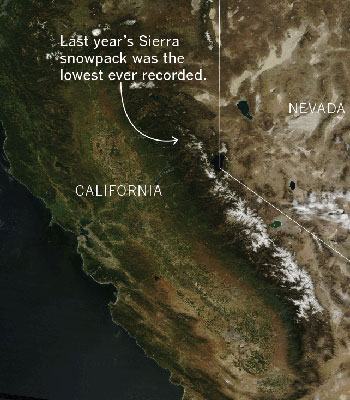 Snowpack in March 2015, the lowest ever recorded LA Times 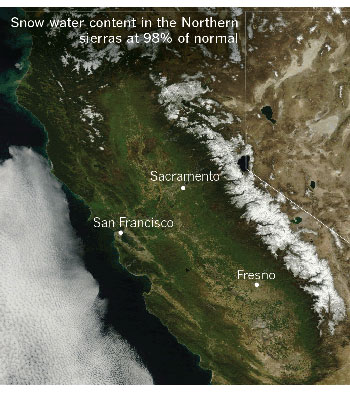 “This was a dry, dusty field last year, so it’s a big improvement but not what we had hoped for,” Frank Gehrke, chief of the California Cooperative Snow Surveys Program, said just after taking the measurement. “This is going to improve conditions for both reservoir storage as well as stream flow, but there’s still going to be some ongoing effects from the past years of…way-below-average snow pack.”

Throughout the winter months, snow surveys are taken at various points in the Sierra Nevada. The measurement near the first of April is the most significant historically and hydrologically, because it’s the time of year when snowfall typically begins to melt, providing 30 percent of the state’s water.

In addition to the traditional aluminum pole method, surveyors from the state’s Department of Water Resources conducted aerial surveys and analyzed data from snow pillows, flat sensors put on the ground that measure the weight of accumulated snow.